A possible tax on sweetened sugary beverages (SSBs, and in particular sugary carbonated soft drinks) is topical internationally. This blog considers some economic theory around prices and demand, epidemiological predictions, and then a recent Australian study on the topic. The bottom line is that such a tax would probably be good for health of all groups in NZ, but particularly the poorest New Zealanders. Such a reduction in health inequalities is an added advantage in a country where health inequalities remain an important problem.

The international evidence (albeit mainly modelling studies) is suggestive that a tax on SSBs would help control obesity and hence benefit population health. Such a tax (e.g., at the 20% level) would probably not have as large an impact on health as, say, reduction of salt in processed food or food reformulation to reduce sugar and satur 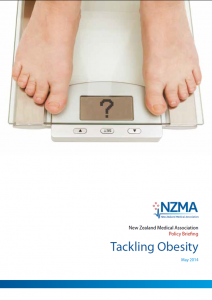 The NZMA in its recent “Tackling Obesity” report calls for consideration of a SSB tax, and in 2011 called for action on health inequites.

ated fat in processed foods. But sugary fizzy drinks are nutrient poor, have healthier alternatives (e.g. water, milk or diet fizzy drinks), and seem to be a sensible first step for food taxes if as a society we put a priority on low-cost ways to gain health. In this blog I consider whether such a tax might have the added advantage of reducing health inequalities. I use a theoretical example, and then highlight a just published Australian study that provides empirical support that a sugary fizzy drink tax should reduce health inequalities – and may also not be too regressive as a tax.

If you do not like math, then skip down to the ‘Latest Australian Study’ heading. If you like ‘structured quantitative speculation’, then read on.

Imagine (not unrealistically) the following:

1. As a percentage of total energy intake, SSBs make up a greater percentage for low socioeconomic groups:

Then, due to different starting points and different responsiveness to price, the change in the % of total energy intake differs between rich and poor (for a 20% increase in price from a tax):

So what happens to health inequalities? Imagine (not unrealistically) the following:

4. Diseases associated with SSB will have changing incidence in future with changing SSB consumption:

–      Lets assume a rate ratio of 0.9 for each 1 percentage point reduction in energy intake from SSBs.

The bar graph below shows these disease rates before and after the SSB tax. Disease incidence would fall by 14.1% in the poor, and by 5.5% in the rich. Consequently the relative inequality in disease rates between rich and poor fell from a rate ratio of 3.00 before tax to 2.73 after tax, and the absolute inequalities fell from a rate difference of 200 per 100,000 before tax to 163 per 100,000 after tax. 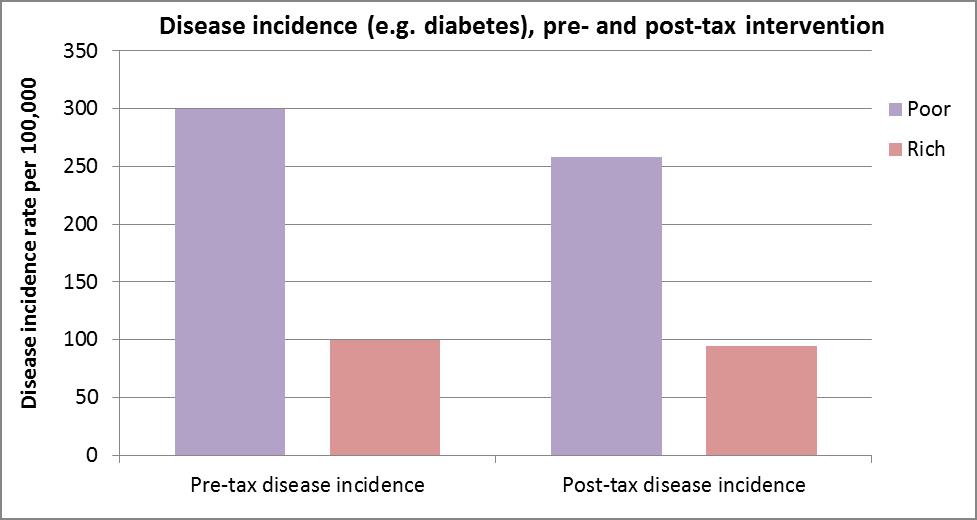 This above example is a thought experiment that may not precisely reflect reality. But, the price elasticities and disease rates do resemble our current context. Second, in actual modelling work we are progressing in BODE3 for tobacco tax and mandatory salt reduction, this is the sort of result we see – bigger health gains for Māori compared to non-Māori due to different starting distributions of risk factors and disease incidence.  Abstracting a bit more, and considering what we know nationally and internationally, it is reasonable to assume that population-wide policies that reduce risk factor exposures will often reduce health inequalities – in absolute terms at least, if not always in relative (i.e. rate ratio) terms.

But do we have empirical support for my ‘structured quantitative speculation’? Yes.

Sharma and colleagues have just published an Australian modelling study examining how responsiveness to price varies by socioeconomic group and baseline SSB consumption.  They also model through to estimated impacts on body weight – although not disease incidence such as diabetes per se. Finally, they also estimate whether a SSB tax would be regressive – that is put more financial strain on lower socioeconomic groups (which is a common ‘push back’ argument against taxes from the soft drink industry and its allies).

What does this study find?

1. The study compares both a 20% ‘valoric’ tax on price, and a ‘volumetric’ tax of 20c per litre (which overcomes loss-leader discounts etc). The volumetric tax has about a 50% bigger impact than the straight 20% on price tax:

This suggests that if we were to implement a SSB tax in New Zealand, we need to consider a volumetric version – not just the more commonly envisaged valoric version.

2. The study carefully and thoroughly addressed cross-price elasticities – putting up the price of sugary fizzy drinks did see an increase in diet drink consumption. That is, consumers tended to (not surprisingly) switch to alternative healthier drinks (e.g. diet drinks, water, etc).

3. The study looks specifically at impacts by household income groups, and by consumer consumption levels. The biggest impact (i.e. both reduction in SSB consumption and weight loss) is among low-income households (more elastic response to price) and higher consumers:

“The difference between the change in weight is substantial for the target group of heavy purchasers of SSBs in low-income households, with a weight reduction of up to 3.20 kg for the volumetric and 2.06 kg for the valoric tax.”

4. The study looks specifically at regressivity of the SSB tax:

Thus, there is a bigger financial impact on low-income households – but probably not to the extent that the industry might argue. And it is probably acceptable in light of the bigger health gains for lower socioeconomic groups. Furthermore, if the revenue from the tax was used to fund healthy school lunches in low-income areas – then the benefits would be even greater.

Is this study by Sharma and colleagues reliable? Mostly. Nghiem and Genc, two econometrician colleagues of mine, had various quibbles about the methods (see footnote at end of blog), but both considered that the econometrics were ‘good on the whole’.  Scarborough, a diet modeller colleague from the UK, thought the modelling link through to body weight change may have been a bit simplistic, but “this is unlikely to have had a substantial impact on results“.

–      Achieve health gains for all social groups, but more so for lower socio-economic groups (and in the NZ context especially Māori and Pacific)

–      May have some regressive element in financial terms, but it is probably ‘not too bad’ and this could be offset by using revenue gained from a SSB tax to (say) provide healthy school lunches in more deprived school environments.

Footnote: Econometric comments from Nghiem and Genc: (1) The use of the Heien & Wessells approach to account for censored demand may not be ideal, but it is commonly used in these studies – and is probably adequate. (2) The authors do not make any statements about how the standard errors of the elasticities are calculated. That probably means they are not robust standard errors, which is not desirable (i.e. probably a bit too narrow). (3) The authors may have underestimated the tax burden difference a little between low and high income groups due to the formula they used to calculate the tax burden. (4) Weight loss may been overestimated, by not allowing for unintended consumption of other high caloric foods that are not included in the model.