Editor note: This is Part 2 of a two-part blog by Dr Caroline Shaw and Associate Professor Diana Sarfati on breast cancer screening. In Part 1 they looked at the contested research around breast cancer screening. In today’s Part 2 they explore the implications for New Zealand. As Editor’s, we agree with Shaw and Sarfati that screening beneath the age of 50 should stop and the quality and honesty of communication to women must improve. We would also go one step further and argue that the cost-effectiveness of breast cancer screening should be re-evaluated, for optimistic and pessimistic scenarios. A media release also accompanies this blog.

What do we do with the conflicting information on breast cancer screening? 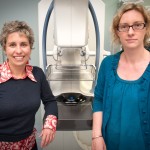 Sorting through the information about breast cancer screening is difficult. There are highly experienced and knowledgeable screening experts on both sides of the debate and both sides make some cogent arguments. There is disagreement about the validity of evidence from the individual randomised controlled trials (RCTs), about whether improvements in treatment have had an impact on screening effectiveness and about the level of over-diagnosis from screening. In some cases researchers are looking at the same screening studies and concluding very different things. In others, they disagree about the best methods and data to use to examine an issue. Polarisation of views is pretty typical in screening; however it does make it difficult to know where the truth lies as positions become entrenched.

However it is good that this debate is happening. People care passionately about screening and about the evidence for it. It is also important to realise that evidence moves on. Decisions were made about breast cancer screening with the best will and understanding at a specific point in time. As with many healthcare issues, more evidence becomes available, methods change and we need to have the courage to be able to revisit our decisions.

What are screening experts recommending?

There have been a variety of responses to this issue, ranging from the UK Independent Review, which recommended that the existing programme of 3-yearly screening for women aged 50-70 years should continue in the UK (1), to a Swiss review which recommended that existing breast screening programmes in Swiss cantons should be time limited, and no new screening should commence (2). The Cochrane review suggests that the time has come to review whether screening should be recommended at all. The Canadian review recommended screening 2-3 yearly for 50-74 year old women, with the proviso that these are weak recommendations due to the quality of evidence. They noted that the risks and benefits needed to be clearly discussed with women, and that recording informed discussions about screening as well as participation rates should be part of screening programme performance measures, in recognition of individual preferences about benefit and risk trade-offs.

Stopping screening is hard; the intuitive appeal of early detection is almost overpoweringly strong and any attempt to reduce screening likely to result in a general outcry and potential political fallout. We know of only one cancer screening programme that has been stopped internationally. This was screening for neuroblastoma (a common cancer in childhood), which did not (as far as we are aware) happen in New Zealand, but was common in the US, Canada, parts of Europe and Japan. There was no RCT evidence for this screening prior to the commencement of screening programmes, but many strong advocates for it and the intuitive appeal that early detection must be beneficial. Trials were eventually conducted and found to show no benefit and plenty of harms, in the form of unnecessary surgery and chemotherapy (3,4). Screening ceased at this point and subsequent follow up showed no increase in mortality from neuroblastoma (5).

Breast screening in women under 50

The advice from bodies who have reviewed the evidence on breast cancer screening for women under 50 is fairly consistent. Screening for this age group is not recommended, on the basis that the benefits are less than for older women, and the harms probably more (6,7). New Zealand has a programme that starts at 45; we should re-consider this starting age. We also know that when a “citizen’s jury” of New Zealand women aged 40-50 are presented with the evidence of harms and benefits of screening in this age range and given the opportunity to fully understand it, the majority of them would vote not to offer population screening to women in this age range.

Coming back to women who are thinking about whether they should participate in screening. What should we tell them? Overall we know that in many countries women over estimate their risk of cancer and the benefits of screening (8), which makes it imperative that information about screening is accurate and understandable. There are two issues here; which information to present and how to present it. Firstly, what information should we use? Depending on whether you select information from the ‘in favour’ or ‘not in favour’ end of the spectrum breast screening will look more or less attractive. Secondly, we also know that the same information presented to women in different ways about how effective screening is can result in quite different responses (9). One of the complaints made about breast cancer screening pamphlets is that they can present information to women that is more likely to promote participation (8). As an example, one of the short form BreastScreen Aotearoa pamphlets has clear understandable information on the benefits of breast cancer screening, but minimal information on the harms such as over-diagnosis (the statement on over-diagnosis is : “If a breast cancer is found you will be offered treatment. There is a possibility that you may have treatment for a breast cancer that would not have been life threatening“). An alternative approach to communication is shown in the figure below. 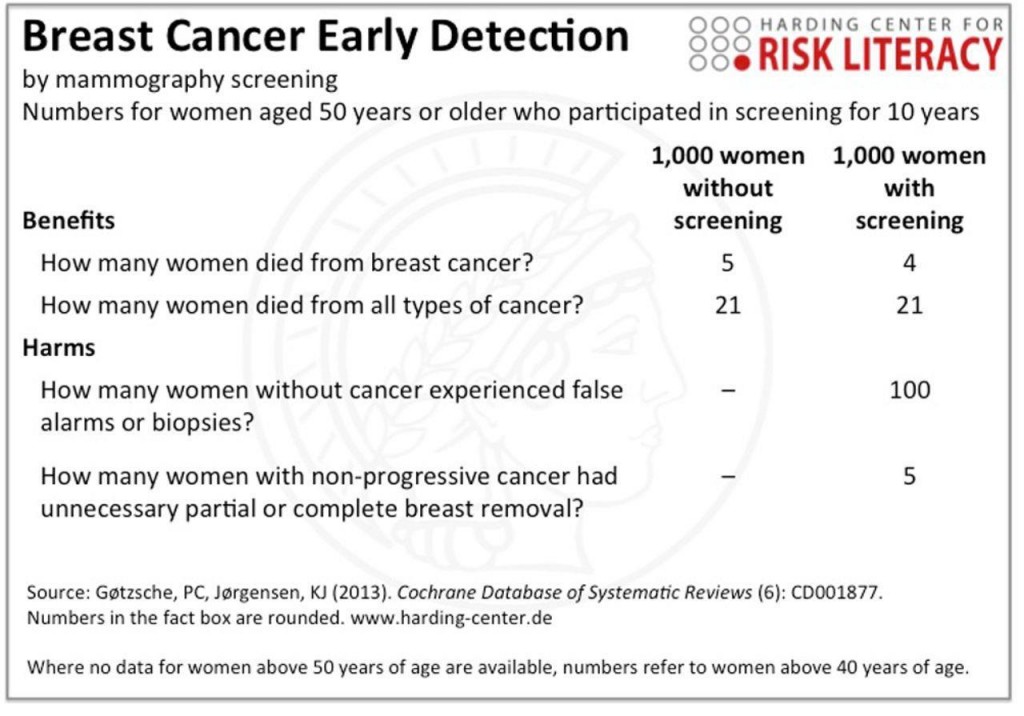 In New Zealand we need to have a more honest discussion about breast cancer screening. We are not doing women, or the population in general, any favours by not acknowledging the uncertainties and disagreements in this area. There is unlikely to be any ‘magic bullet’ piece of evidence that will resolve the controversies about breast cancer screening, so we need to start thinking about a more sophisticated way to talk to women, to acknowledge the limits of research and scientific understanding and to convey that an informed choice not to participate in screening is as valid and sensible as a choice to screen.

1. The Independent UK Panel on Breast Cancer Screening. The benefits and harms of breast cancer screening: an independent review. Lancet 2012;380: 1778-86.

9. Sarfati D, Howden-Chapman P, Woodward A, Salmond C. Does the frame affect the picture? A study into how attitudes to screening for cancer are affected by the way benefits are expressed. J Med Screen 1998;5:137-40.