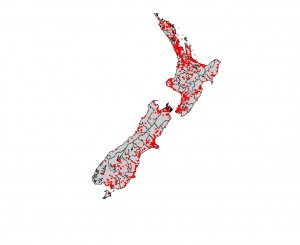 How can we achieve the 2025 goal of a smokefree nation? The best approach to this tobacco endgame, as it is often called, is unclear. Options include ongoing tobacco tax rises, a sinking lid on tobacco imports, denicotinisation of tobacco products, etc. In this blog we consider the option of reducing the number of tobacco retail outlets – leaning on a study we have just published. There are no observational studies, let alone randomised trials, of nation-wide retail outlet reductions. One way to address this ‘evidence gap’ is through modelling studies that anticipate how smoking behaviour may change due to increasing cost of tobacco through travel time and costs – an economic methodology. There is a lot of uncertainty around our results, but they do suggest that an outlet reduction strategy would probably help nudge the country towards the NZ Government’s smokefree goal. But our modelling also suggests tobacco outlet reduction is far from a panacea – under the assumptions we used. Therefore, outlet reduction would probably have to be but one component of an overall programme of activity to achieve the 2025 goal.

There is some evidence that ready access to tobacco retailers influences both smoking initiation and limits successful smoking cessation (e.g., for youth smoking, adult smoking, for reduced smoking cessation, and for quitting success). This is most likely why there is growing interest in reducing the quantity and/or density of tobacco retail outlets and several jurisdictions internationally have proposed bans on the location or number of outlets. Another factor is that in the alcohol control literature there is evidence that ready access to alcohol outlets and alcohol availability is associated with increased alcohol consumption and alcohol-related harm (see this systematic review, this systematic review, and this overview of systematic reviews).

In our modelling work we considered how a reduction in tobacco retail outlets would increase both time and travel costs for smokers (see Figure 2 below). We know how increasing the price of tobacco reduces demand (e.g., typically a 10% increase in the price of tobacco leads to a reduction in tobacco consumption of around 2% to 5% in high-income countries). So we used this relationship but with age-group-specific price elasticities and with NZ data on the value of time (e.g., NZTA data indicating $7.18 per hour for travel time). 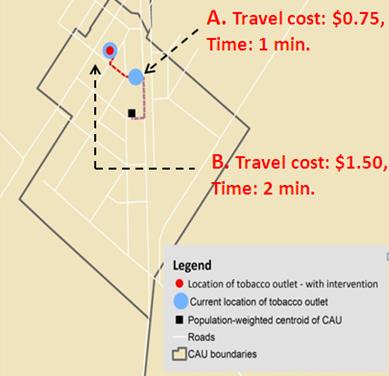 We used this approach to model the future prevalence of smoking under a range of outlet reduction scenarios in NZ, including:

Relative to the current access to tobacco retailers (n = 5979) (see Figure 1), we found that for a hypothetical law requiring a 95% reduction in outlets, the ‘cost’ of a pack of 20 cigarettes (including travel costs) increased by 20% in rural areas and 10% elsewhere and yielded a national smoking prevalence of 9.6% by 2025 (compared to 9.9% with no intervention). The intervention that permitted tobacco sales at only 50% of liquor stores resulted in the largest cost increase (~$60/pack in rural areas) and the lowest smoking prevalence (9.1%) by 2025. Elimination of outlets within 2km of schools produced a smoking prevalence of 9.3% in 2025.

These results suggest that tobacco outlet reduction interventions could modestly contribute to an endgame goal. Nevertheless, these estimated impacts are likely to be conservative and under-estimate the true impact, as there would likely be additional denormalisation of smoking from such interventions which would probably further reduce smoking prevalence.

But clearly to get to an endgame target of <5% smoking prevalence by 2025, other interventions will need to be considered by the NZ Government as well – and might even be preferable to outlet reduction as the core strategy component. These could include:

Fortunately there is substantial NZ public support for various interventions around reducing access to tobacco outlets and for other endgame strategies (e.g., this national survey of smokers and this survey of young people).