There is nothing like being second to Australia to galvanize angst and consternation among Kiwis. Today Alafeishat and colleagues have published a paper in the NZ Medical Journal showing that New Zealand has higher death rates from cancer than Australia that cannot be explained by higher incidence for most sites. This suggests that there are differences in cancer survival, which appear to be particularly marked for bowel cancer, and for breast cancer for women. This is important, highlighting room to improve in our health sector. This blog we canvass how bad (or good) the situation really is, the problems and possible sources of error comparing survival across the ditch (it is not easy to do), and we conclude with policy implications.

Alafeishat and colleagues essentially repeated a study led by David Skegg (published in 2002), comparing cancer mortality for New Zealand with Australia. They found that New Zealand lagged, and Elwood and colleagues find that whilst both countries have enjoyed strong improvements since then, New Zealand still lags by roughly the same amount. Female kiwis have 15% higher death rates than expected using Aussie as the comparator, and males 5% higher. The biggest contributors to the gap were colorectal cancer (by a clear margin), lung and breast. Moreover, mortality gaps were considerably larger than incidence gaps, strongly suggesting that differing cancer survival is a major reason. Indeed, Mark Elwood (the senior author of this latest NZMJ paper) has already spoken elsewhere to their next study that shows clear gaps in survival between Australia and New Zealand, especially for survival after one year (which points to differences in early diagnosis and treatment).

Is it all bad? No. Both countries have enjoyed good improvements in cancer mortality (e.g. see recent PHE blog), and strong improvements in cancer survival. This latter survival improvement has been previously reported by the Ministry of Health, ourselves and others (see North and South Graphic of trends in cacner survival, using CancerTrends data and in figure below). And this improving survival is a global pattern. The health system is getting better at detecting cancer early, treatments are generally improving (e.g. for breast and colorectal cancers, but not so much lung and pancreatic cancer). Moreover, both New Zealand and Australia sit very near the top (again) of all countries now in life expectancy – so there are a lot of good things going on. 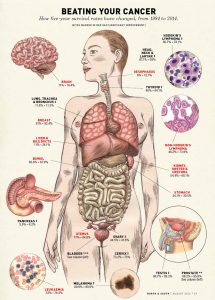 Cancer sruvival trends by site (data provided by us, but graphic created by North & South Magazine and gratefully acknowledged)

But it is obviously not all good. That persistent gap in mortality and survival with Australia suggests we could do better. We know from various research and ‘on the ground’ feedback from colleagues at the coal face that there are delays in patients getting through the system to access treatments – there is room to improve. Furthermore, we have evidence for colon and lung cancer that there are ethnic inequalities in access to treatment – although more recent data from the “C3 Project” led by Diana Sarfati would suggest that inequalities may be lessening, albeit still present in places. And we do know the sorts of interventions that can be done to improve patient journeys through cancer care, such as cancer care coordinators (which are being implemented in New Zealand, and which we have shown elsewhere to be cost-effective – at least for stage III colon cancer).

How reliable are these Aussie-NZ comparison by Mark Elwood and colleagues? About as good as you can achieve. It is surprisingly difficult to undertake cross-national comparisons of cancer statistics For example, each country needs to be capturing cancer diagnoses with exactly the same rigour, and following up for mortality with the same accuracy. Elwood and colleagues seem to do as good a job of this as possible. But if we try and compare cancer incidence rates, say, across the Tasman it can get messy – especially for something like prostate cancer with varying timing of ‘waves’ of prostate specific antigen (PSA) testing across the ditch. The Ministry of Health is currently updating New Zealand cancer survival statistics. Great. But what would be really useful is if New Zealand contributes to rigorous cross-national comparisons, such as CONCORD, to inform policy. Think of how useful OECD Reports are comparing countries for policy debates in New Zealand – we should facilitate the same comparisons for cancer survival.

What are the key implications of Elwood’s research for cancer control policy in New Zealand? First, the sector is working hard already on cancer care pathways, care coordination, and such like – that work needs to continue, looking to constantly improve patient journeys, erase inequalities, and remove (as much as possible) regional variations by lifting all centers to an achievable benchmark. This is a key role for the Cancer Programme at the Ministry of Health, Cancer Control New Zealand, and more generally the cancer networks and centers around New Zealand. Second, access to new and (cost) effective treatments needs to continue – although, frankly, agencies such as PHARMAC already do a good job in this space (living within New Zealand’s means, and considering other health priorities beyond just cancer). Third, early detection can usually (but not always) help. The poster-child example at the moment is bowel cancer screening. There is currently a pilot in Waitemata – great. But the evidence base that colorectal cancer screening is cost-effective is now strong, meaning the imperative could shift to rapid scaling up screening to the rest of New Zealand – learning from the pilot of course.

Finally, prevention matters and is usually very cost-effective! This will not alter survival per se, but it will reduce the morbidity and mortality burden by simply reducing the number of incident cases of cancer. There is a crude rule of thumb that roughly a third of cancers are readily preventable – which is a far greater health gain than could be realistically achieved through focusing on treatment alone (and improving survival). What are the priorities here? No surprises: getting rid of tobacco from New Zealand (actually a Government goal), reducing the obesity epidemic, reducing excess alcohol consumption, and making good use of ‘medical’ prevention (e.g HPV vaccination that prevents cervical and other cancers). Furthermore for colorectal cancer prevention, an even more cost-effective approach than screening might even be improving the NZ diet – with less processed meat and more wholegrain cereal products being consumed.