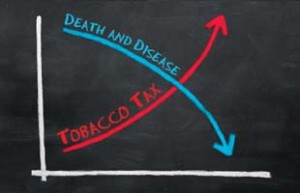 In a modelling study we just published in the international journal Tobacco Control, we examined the potential role of increasing tobacco tax for achieving an end to the tobacco epidemic in NZ. The bottom line is that tax rises could play an important role but other strategies will almost certainly be required if the Government’s smokefree goal is to be achieved by 2025. In this blog we discuss some of the modelling results and also the other policy options that could be explored.

The international evidence is that increasing tobacco tax is one of the most important single tobacco control measures. Its particular advantages include: (i) a strong evidence-base for effectiveness (e.g., as reviewed by the agency IARC); (ii) being a typically well-established function of government (which makes it hard for the tobacco industry to mount legal challenges); and (iii) tax increases tend to generate extra revenue that can then be used in funding other aspects of tobacco control and/or to fund health services. An extra plus is that the weight of evidence suggests that tobacco tax increases contribute to reducing health inequalities (for 2 recent systematic reviews see here for adults, and here for youth).

We adapted a NZ-specific smoking projection model (Ikeda et al) to ensure it reflected the latest Census results on smoking. We then modelled annual increases in tobacco excise tax of 5%, 10%, 15% and 20% (with 10% reflecting the annual increase legislated by the NZ Government to 2016).

The modelling results suggest that with a continued commitment to annual 10% increases in tobacco excise tax (in addition to other tobacco control activity such as on-going Quitline and cessation support), NZ’s smoking prevalence is projected to fall from 15.1% in 2013 to 8.7% by 2025. This result is compared to 9.9% in 2025 without any further tax rises (see the Table below, Figure 2 and for extra details see the full article).

For annual tax increases of 20%, the smoking prevalence is projected to fall to 7.6% by 2025. The latter is approaching the under 5% smoking prevalence level that many in the NZ health sector regard as the operational target of the 2025 goal.

We conducted scenario analyses which did not suggest that growth of the illicit tobacco market would substantively undermine the impact of tobacco tax rises. But uncertainty persists and the modelling could not take account of such unknown factors such as: (i) the gradual de-normalisation of smoking that will occur with lower levels of smoking; (ii) changes to the ‘nicotine market’ such as the legal or illegal availability of alternatives (such as e-cigarettes); (iii) and how the price elasticity of tobacco might change when prices are much higher than now. (Though we note the latter might not be such a problem – given that other much more expensive drugs have similar elasticities to tobacco). 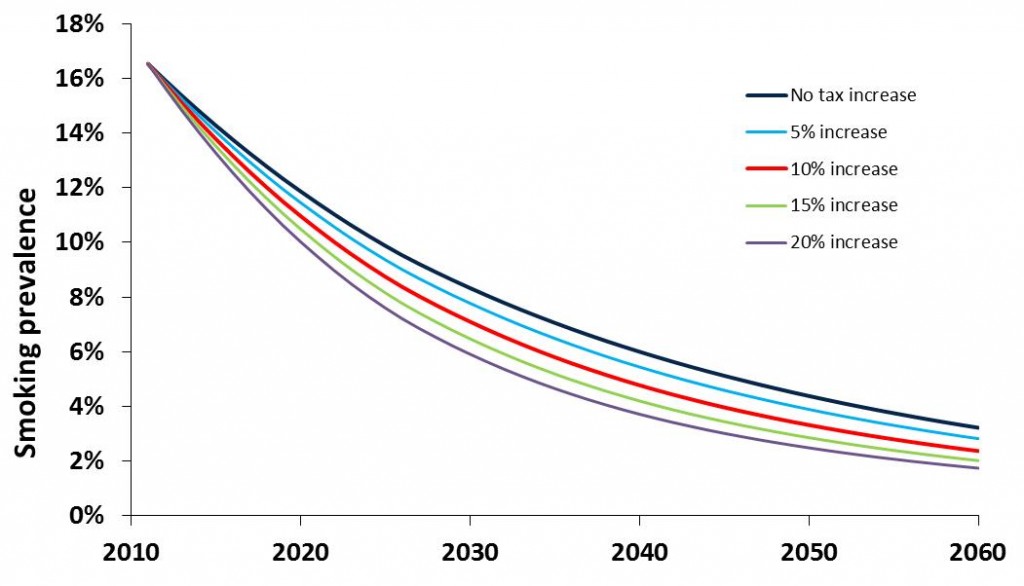 Where to from here for NZ?

These results may encourage NZ policymakers to extend the annual tobacco tax increases from 2016 (when the current series is due to end) further out into the future. The tax lever would also achieve more health gain if it was increased to 20% annually or more. Acceptability of such approaches would be greater if more of the revenue was used to help smokers achieve their quitting goals (see a study indicating that most NZ smokers would favour this). The Government may also need to better convey the message that a large majority of NZ smokers regret starting smoking (83% in one study), and that sharp price rises can therefore help them achieve their personal goals of escaping nicotine addiction.

But this modelling suggests that a wider range of tobacco endgame strategies will be needed if the smokefree nation goal is to be achieved in time. Some options (none of which are mutually exclusive) include:

So in summary these results can provide reassurance to policymakers around the value of ongoing tobacco tax increases. But tax increases will probably need to be supplemented with other new approaches if the smokefree 2025 goal is to be achieved.