A large prospective study on dietary salt and health has recently been reported in the New England Journal of Medicine. While reinforcing extensive past work that a (very) high intake of salt is hazardous to health – an increased hazard was also found for low intakes of salt (i.e., a “J-shaped” or “U-shaped” relationship). This blog post considers this new study in more detail and suggests that we need a high-level international review to clarify the research and policy agenda from here. Our interpretation should be treated as preliminary on what may be an important study; therefore, we welcome and encourage comments on this blog post.  [SEE MULTIPLE COMMENTS ON THIS BLOG BELOW.  AND IN PARTICULAR SEE SUBSEQUENT BLOG WHERE WE UPDATE ANALYSIS BELOW BASED ON DISCUSSIONS WITH COLLEAGUES – IMPORTANT.]

The overall evidence around salt and harm to health (as outlined in two recent systematic reviews (1, 2)) has been described as strong enough to justify public health action to reduce high levels of sodium intake. Indeed, as recently as August 2014 a new study estimated that there were 1.65 million deaths globally from cardiovascular causes in 2010 attributed to sodium consumption above a reference level of 2.0 g per day (3). This study included a new meta-analysis of 107 published trials of sodium reduction and reduced blood pressure (BP).

Furthermore, the risk factor of a “diet high in sodium” has been estimated to be one of the top two dietary risk factors for disease burden identified in the massive Global Burden of Disease Study (4). “Salt reduction” has also been included in the top five priority actions for non-communicable disease (NCD) control internationally (5), and for reducing NCD inequalities (6).

However, the evidence relating to sodium and health has always been controversial to some extent (7). In particular, a recent Institute of Medicine Report (8) highlighted the uncertainty around the health benefits and risks of reducing sodium intakes below the 2300 mg/day level (see the Table below).

Most recently, a large study has been reported in the New England Journal of Medicine by O’Donnell et al (12). It reports a “U-shaped” relationship for dietary salt intake and all-cause mortality and also for cardiovascular events (see the Figure below). Of note is that the increased cardiovascular risk was estimated to only start increasing from the lowest estimated risk level (4-5g of sodium – see Table above). Other work has also reported such a J-shaped or “U-shaped” relationship (13-16)) but the last two of these cited studies included people with established cardiovascular disease (so reverse causation is possible – see below). But the O’Donnell et al study is by far the largest that has reported such a pattern. Indeed, it involved over 100,000 subjects from 17 countries. It had other desirable features: 95% follow-up of subjects, 3.7 years of follow-up on average, it considered dietary potassium intake as well, and it undertook various analyses to explore the possibility of reverse causation, sensitivity analyses around potential confounding (array-approach), and propensity-score matched sensitivity analyses. 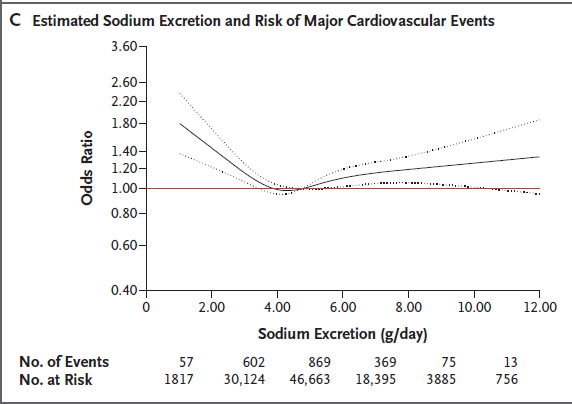 But no study is perfect, and the limitations with this new study include:

There are also some limitations with generalising the findings from this study:

The new O’Donnell et al study is large and appears to be fairly robust. As such it probably needs to be considered as a serious challenge to certain aspects of the current prevailing view around the level at which the intake of dietary salt impacts on health outcomes. While there is no doubt that very high salt intakes are hazardous – it is now somewhat uncertain if too little salt is also hazardous and what the threshold is before the hazard starts to appear (for both too little and too much).

This blog post should be treated as our preliminary perspective. This new study will probably generate much academic discussion and probing. We plan to update our perspective in the future (keep checking Public Health Expert blog).

What could be done now?

The relationship between dietary salt and poorer health is still fairly certain for very high intakes – but given recent research findings there is less confidence about the associations for other levels of intake. Given this uncertainty there appears to be a reasonable case for a WHO-led expert review.