Previously published NZ-based modelling work has explored business-as-usual trends in smoking prevalence, and the potential roles of interventions such as higher regular tobacco tax increases in achieving the NZ Government’s Smokefree Nation 2025 Goal. As best we can model, 10% per annum increases in tobacco tax alone will not be able to achieve the 2025 Goal. In this blog post we outline our favoured package to achieve the 2025 Goal which is ongoing increases in tobacco taxes, intensification of existing evidence-based tobacco control activities and implementation of a major new ‘endgame’ strategy (such as denicotinisation). This package, especially a new endgame strategy, faces political and implementation hurdles that need research, policy analysis and advocacy to overcome.

Various surveys, aggregate tobacco consumption data, and the 2013 Census results all indicate that tobacco control is succeeding in reducing smoking prevalence in NZ. There is also widespread support by the public for tobacco endgame strategies (1-5), or at least for increased government action on tobacco control (including among smokers) (6). But the current downward trend in smoking prevalence is very unlikely to get us to the NZ Government’s Smokefree Nation Goal of minimal smoking prevalence by 2025, particularly among relatively high smoking prevalence populations like Māori. See for example publications on projections we have performed: this study (7) and this updated one (8).

There are always limitations with modelling-level evidence, but other such work suggests that regular tobacco tax increases will not get NZ to the 2025 goal (even at the 20% annual increase level (9)) – see Appendix A and this previous blog post. Similarly, a gradual reduction of tobacco retail outlets by itself will most likely not get us there (10) (and see this previous blog post). So to help with strategic planning by the NZ health sector, we aimed to outline various strategic options for achieving the Smokefree 2025 Goal. Appendix B covers background information and assumptions relating to this option list.

In the table below we have identified three major strategic options. It is assumed that each of these options also includes continuing 10% per annum tobacco tax increases and an incremental approach with a continuation and intensification of existing ‘mainstream’ best practice tobacco control e.g., enhanced mass media, extensions to smokefree policies, and smoking cessation support etc (see footnote to the table for the full list). Option One details this extended business-as-usual approach. In Option Two we add one or more of the current state-of-the-art tobacco control interventions from around the world e.g., plain packaging, banning additives and a minimum retail price for tobacco. In Option Three we add one of four major over-arching interventions which have not yet been implemented internationally but are likely on theoretical grounds to make very substantial contributions to reducing smoking prevalence.

* Our general view is that higher increases in tobacco taxes (e.g., 20% annually) could be justified but only if accompanied by other reforms such as lowering income tax on low-income NZ citizens or other fiscal measures to reduce housing costs, fuel poverty and other forms of poverty.

** Intensification of established evidence-based tobacco control interventions. These include mass media campaigns, smokefree policies, regularly refreshed pictorial health warnings, strengthening of retailer controls to reduce accessibility of tobacco products, strengthening of marketing controls, highly accessible evidence-based smoking cessation support, and full implementation of FCTC section 5.3 interventions on preventing the influence of the tobacco industry on public health policy. Obviously ongoing research should inform effectiveness and cost-effectiveness of these interventions so that the mix can be optimised to make best use of limited health sector resources.

Our most favoured option

Modelling work suggests that Option One is unlikely to achieve the Smokefree 2025 goal, and we suspect that adding one or more state-of-the-art interventions used internationally is also unlikely to be sufficient. Our judgement is that Option Three in the above table would maximise chances of reaching minimal smoking prevalence by 2025. The specific component involving a major new intervention would need to be determined by further research, expert deliberation and consensus within the health sector, and policy analysis – followed by political will. We also suggest that of the state-of-the-art interventions detailed, plain packaging at least should also be implemented in the light of the very promising findings about its impact in Australia (see this blog post), and its advanced stage in NZ’s legislative process.

For all these options, ongoing efforts will also be needed to highlight the benefits of tobacco control in terms of potential health gain (25) and reduction in health inequalities (26,27).

When current trends are considered, reaching the Smokefree 2025 goal will probably not be achieved. Our favoured package (ongoing annual tax increases [at 10%], intensification of other established evidence-based tobacco control interventions, and a major new additional strategy [option three above]) would help maximise the chances of success. However, this package, especially a new endgame strategy, faces political and implementation hurdles that need research, policy analysis and advocacy to overcome.

Statement on Competing Interests: None of the authors have any competing interests – including no links with pharmaceutical companies. Their work on tobacco epidemiology and control is either funded by competitive research grants or is from voluntary efforts. 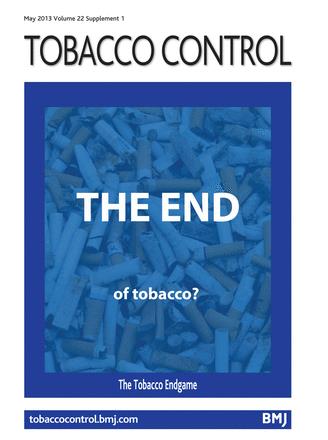 Appendix A: Modelling results giving the projected prevalence of daily adult smoking in 2025 with yearly increases in tobacco excise tax from 2011 onwards of between 0% and 20% (reproduced from Tobacco Control (9)).

Appendix B: Background information and assumptions to the strategic options

7. Ikeda T, Cobiac L, Wilson N, Carter K, Blakely T: What will it take to get to under 5% smoking prevalence by 2025? Modelling in a country with a smokefree goal. Tob Control 2013, (E-publication 26 September).