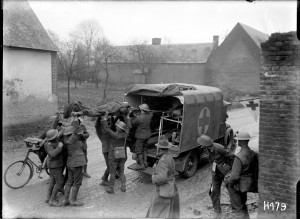 This blog post looks at a recently published study of the lifespan of NZ soldiers who participated in the First World War. It then asks more broadly what is known about the longer term health outcomes for military personnel participating in war – and suggests that such issues need to be considered carefully by governments before participating in foreign military engagements.

The study that a group of us published in a recent December edition of the British Medical Journal is detailed here (1). It found that the impact of the First World War (WWI) on participating NZ soldiers was that they typically lost around eight years of life and had an increased risk of early death in the post-war period. The study considered randomly selected soldiers who embarked on troopships in 1914 (the year the war started), along with a comparison “non-combat” group who departed on troopships in late 1918 but for whom the war ended before they got to the frontlines.

The lifespan of the 1914 group was estimated at 65.9 years, compared to 74.2 years for the non-combat group – an eight year gap. As well as warfare-related injury deaths, other causes of excess death rates included those from chemical weapons and various infectious diseases such as malaria and pandemic influenza.

The study also found that among survivors of the war, the 1914 veterans lived a statistically significant 1.7 years less (72.6 years compared to 74.3 years in the non-combat group). Further analysis of death certificate data suggested that war-related causes such as suicide may have played a role in this difference. Another factor was possibly the high burden of injuries in the survivors, with an estimated 41% of NZ soldiers receiving non-fatal wounds in the war. These injuries are likely to have increased the risk of death in subsequent surgical operations after the war and also death from cardiovascular disease.

While war-related death tolls for combatant nations of WWI are available, this appears (to our knowledge) to be the first study to provide estimates for the war-related life lost per participating soldier and for the veterans where an appropriate comparison group is used.

So what is known about long-term health impacts of combat experience?

For veterans of WWI, the research base is relatively sparse. Various lifespan studies had suboptimal control groups that have made it difficult to draw conclusions e.g., (2,3). However, a US study of those veterans who were exposed to mustard gas (a chemical weapon used in WWI) found that they had increased overall mortality rates (and specifically for pneumonia and tuberculosis) relative to control groups of other veterans (4,5). Likewise, in a similar UK study there were significantly higher mortality rates for veterans exposed to mustard gas compared to the male population of England and Wales (for: all-causes, all cancers and lung cancer) (6). Such findings are consistent with a more up-to-date summary of evidence that mustard gas is carcinogenic (7).

Vietnam War veterans with PTSD have been relatively well studied. Among this group there is evidence for higher “postwar mortality for all-cause, cardiovascular, cancer, and external causes of death (including motor vehicle accidents, accidental poisonings, suicides, homicides, injuries of undetermined intent)” (12). In addition, a review of the health of Canadian, US and Australian veterans has reported evidence for poorer health for a wide range of conditions, including “general health”, “neurological conditions” and cardiovascular disease (13).

Furthermore, being seriously wounded and having a “permanent disability/illness” has also been associated with increased risk of mortality in long-term survivors of the Second World War (14). Other research on veterans of the Israeli army indicates that those with lower limb amputations have an increased risk of death from cardiovascular disease (15).

Just this year is an issue of “Epidemiologic Reviews” that has 13 articles on veteran’s health (16). One of the included systematic reviews reported: “our findings indicate that Gulf and Iraq/Afghanistan war veterans are at higher alcohol use disorder risk than nondeployed veterans” (17). Another one of the systematic reviews reported that “the majority of studies suggested a small-to-moderate association between combat exposure and postdeployment physical aggression and violence, with a pooled estimate of the weighted odds ratio = 3.24 (95% CI: 2.75, 3.82), with several studies finding that violence increased with intensity and frequency of exposure to combat traumas” (18). If the latter is a true effect then this is an example of how the damage to veterans can result in wider harm to others in society.

How might governments respond to requests for foreign deployment of their troops?

From a public health perspective – war is disastrous for health, especially for the health of civilians. Indeed, nuclear war could kill billions of people (19) and potentially lead to the collapse of human civilisation. Hence governments with some level of rational policymaking should probably work together to put large resources into diplomatic efforts towards preventing war and especially to eliminating all weapons of mass destruction: nuclear weapons, chemical weapons and bioweapons.

In particular for New Zealand (with some track record of being a good third party arbitrator – e.g., the Bougainville conflict) there might be a good case on efficiency grounds for the country to abandon foreign military engagements entirely and to fully focus on doing a high quality job on diplomatic solutions to preventing and resolving international conflict. NZ could strive to become the “Norway of the Southern Hemisphere” in terms of international efforts at conflict resolution.

But if NZ Governments still decide to respond to overseas conflicts by sending NZ troops – there is also a case for the following:

Collectively such approaches would potentially both reduce long-term health burdens for veterans – and the financial cost burden on the NZ health system.