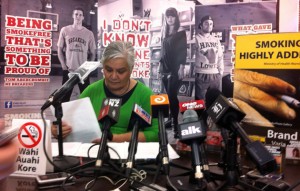 The 16th World Conference on Tobacco or Health (WCToH) has just been held in Abu Dhabi, United Arab Emirates. In this blog post we describe some of the main themes and some thoughts about how these might relate to Smokefree 2025 in New Zealand. In summary, New Zealand can still learn a lot from other countries as we move to the adoption of a full range of state-of-the-art tobacco control policies.

We start with a key highlight of this Conference for New Zealand being the Luther Terry award for Outstanding Community Service for Hon Dame Tariana Turia. This was a fitting recognition of Dame Tariana’s wonderful contribution to tobacco control in Aotearoa, where she has been the undisputed national champion for Smokefree 2025 within the government and Parliament.

The Conference was held in the 10th year of the Framework Convention on Tobacco Control (FCTC) and as expected, implementation of the FCTC globally was a key focus. Implementation continues to be patchy globally, with examples of remarkable success mixed in with frustrating areas of slow progress as revealed in the Tobacco Control Atlas (for example only 16% of the world’s population is covered by comprehensive smokefree laws, the latest FCTC implementation report is available here) and the continued non-ratification by key countries like the US and Indonesia.

However, the Conference was a strong reminder of the potential for the FCTC to support the achievement of the Smokefree 2025 goal in New Zealand and to ensure that we use the treaty to support such progress. The current (2014) NZ FCTC implementation report is available on the FCTC website.

Endgames and how they might be achieved were again a strong theme at the Conference. The most prominent endgame solution was the “Tobacco Free Generation”, which had a parallel session devoted to it. This idea was developed originally in Singapore and proposes raising the legal age of sale by one year annually creating a millennium smokefree generation born in 2000, the members of which could never legally be sold tobacco products. This mechanism will of course do nothing to address cessation among current smokers, and so needs to be accompanied by comprehensive supporting tobacco control interventions. However, it has the merit of underlining the framing of the endgame as protecting future generations from tobacco and should more or less end uptake of smoking over time, hence ensuring that the endgame once achieved will endure. This idea is closest to implementation in Tasmania where legislation is proceeding through the Upper House of the State Government. If this also passes in the lower house, then it would provide a potent local precedent which New Zealand should consider following. A potential downside of this strategy is that it may let the government “off the hook” for the critical more immediate actions.

However, a more prominent theme than national endgames, was the idea of a global endgame for tobacco. This has recently been articulated in a Lancet series on the endgame in a paper which proposed setting a Tobacco Free World target for 2040. This goes well beyond the global non-communicable disease (NCD) target of a 30% reduction in consumption by 2030. The rhetoric of a tobacco free world was frequently echoed by plenary speakers, including the WHO Director General. This idea, and the ‘turbocharged’ implementation of the FCTC that is proposed in the Lancet paper to achieve it, should add further impetus to Smokefree 2025 in New Zealand.

In relation to endgames, other issues raised included those of equity both within country (very legitimate questions were raised about how Smokefree 2025 will be achieved for Māori in New Zealand) and between countries – how to ensure that the Tobacco Free World was achieved for all countries. A theme of many speakers was the need for a clear and comprehensive government tobacco control plan if endgame goals are to be achieved. This was a key recommendation of the Māori Affairs Select Committee report from which the Smokefree 2025 goal originates, but was rejected by the Government in its response. It was also recommended in the Ministry’s recent review of Tobacco Control Services. No such Government plan exists, even so, one speaker in a parallel session mistakenly commended New Zealand for having such a well laid out Government plan with comprehensive, sequenced interventions setting out how Smokefree 2025 will be achieved!

The FCTC interventions which received the most attention were tax and plain packs. Tax continues to be emphasised as the most strongly evidence based intervention and underlined the necessity for continued substantial tobacco tax increases to be at the core of the comprehensive strategy to achieve Smokefree 2025. A great deal of evidence was presented on the “pro-poor” impacts of increased taxes, although the regressivity effect remains strong for smokers who can’t or don’t want to stop or cut down.

Plain packs were a major focus as a relatively new intervention, so far implemented only in Australia, but with growing momentum suggesting that rapid globalisation of this intervention is possible. A major development was the presentation at the conference of a series of Australian studies providing new evidence of the positive impacts of plain packaging and demonstrating that the industry’s predictions of dire consequences (e.g. on boosting illicit trade, reducing the price of cigarettes and adversely affecting small retailers) were false. Details are available in an open access Tobacco Control journal supplement or this brief summary. At a plenary session on plain packaging where this evidence was presented, there were contributions from the next three countries to go ahead – Ireland, UK and Norway. In this context the description of developments in New Zealand appeared a little sheepish given our current policy of waiting for the resolution of the WTO cases, although hopefully momentum will increase as these cases progress. Other countries actively exploring introducing plain packs include Turkey, France, Burkina Faso, South Africa and Panama.

In other sessions a key theme of the successful advocacy for plain packs legislation in Ireland and the UK (a huge achievement in the UK where the government is strongly anti-regulation) was framing it relentlessly as a measure to protect children. This focus on tobacco control as a means to protect children and future generations was also taken up in other sessions and appears to be a powerful and strongly supported idea globally, including among smokers. For example, Dick Daynard’s response to critics who argue that the Tobacco Free Generation proposal is impractical because you can’t deny 25 or 30 year olds the right to buy tobacco was: try adding a question to surveys along the lines of “at what age would you like your children to start smoking – ‘16’, ‘18’, ‘21’, ‘25’ or ‘never’ and see what responses you get. The original Tupeka Kore vision was for an Aotearoa where children were truly protected from the risk of becoming smokers; we need to be strengthening this framing in advocacy for Smokefree 2025 and reporting and listening to the views of children and young people more.

Another major theme was e-cigarettes. Once again there was lively debate about their place in tobacco control, ranging from those who see them as an essential part of the solution to the global tobacco epidemic, to those who see them as at best a distraction and at worst likely to prolong and reinforce tobacco use and nicotine addiction in society, and create new long term health hazards. However, there was a glimmer of hope that areas of consensus are enlarging as the science progresses, although great uncertainties remain. Some of these areas of possible consensus include the following:

There was broad consensus that the genie cannot be put back in the bottle in places like the UK and USA, and that ANDs do have the potential to help end the tobacco epidemic and act as an effective harm reduction approach (although the evidence about long term safety is still much debated).

However, there was also some agreement that there needs to be an enlightened regulatory structure which hits the regulatory ‘sweet spot’ of minimising the marketing and availability of ANDs to non-smokers, particularly minors and young adults and maximising quality control and safety of the products without stifling innovation in the market and favouring the tobacco industry products at the expense of independent producers.

One suggestion, from Stan Glantz a well-known sceptic about the role of ANDs was to follow up some suggestions recently made by Eric Lindblom including measures to restrict marketing and advertising of ANDs only to smokers.

Finally, Ken Warner made the point in this session that whatever we do about ANDs, we should not think they are the whole answer. They will not create the Tobacco Free World on their own. Hence, we must not let up on the other proven measures to address the tobacco epidemic. Which takes us back to the FCTC and where this blog post started.