Yesterday we published a paper in PLoS Medicine that estimates the health gains, health inequality and health system cost impacts of ongoing annual 10% increases in tobacco tax. In this blog I outline the key findings of this paper, and why I think this paper is important. I also reflect on my 8 year journey from laying the foundations for this paper to its actual publication, the realisation of a vision of epidemiology informing policy.

New Zealand is one of a handful of countries with a goal of being tobacco-free. Policy-makers need the best information researchers can provide to realise this goal. We have previously published research and blogs showing how – as best we can model – that ongoing 10% per annum increases in tobacco tax will not be able to get NZ to less than 5% smoking prevalence by 2025. In this PLoS Medicine paper we go further, and estimate the health gains from ongoing tobacco tax increases. For the 2011 NZ population simulated to the end of their lives, we estimate 260,000 (95% uncertainty interval 155,000–419,000; undiscounted) QALYs would be gained from 10% annual tax increases through to 2031. This number is difficult to fathom in isolation. So here are two other ways of thinking of it. First, it is roughly the same benefit one might get from a mandatory 25% reduction in sodium levels in bread, processed meats and sauces. Second, imagine that you were the Minister of Health and banned tobacco outright in 2011; compared to this ‘ultimate’ policy, ongoing 10% annual increase in tobacco tax generate about 17% of all potential health gain arising from outright banning of tobacco. Moreover, we estimate approximately $3.8 billion dollars (undiscounted) in health system savings over the remainder of the 2011 cohort’s life.

The caveat. Whilst we think our modelling is state of the art, and the best that can be done, there is still considerable uncertainty. After-all, we are predicting the future! But such modelling is necessary, we believe, if research is to synthesise information for policy making. A possible parallel is climate change modelling – it is uncertain, but important. In our tobacco model, we did the best we could with all our necessary assumptions. We suspect we can improve on some in the future, the most important one being what happens to tobacco price elasticities (sensitivity of the consumer to price) at very high prices. We are working on this at the moment – research is an incremental process. 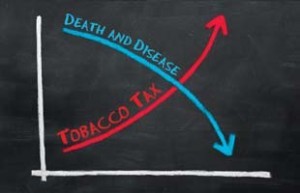 All good so far. But there is a twist. The health gains and cost savings take about five decades to peak. Why? Because more smokers are younger, and younger smokers are more price responsive, so the people responding to tax are young and decades away from their cardiovascular and respiratory diseases and cancers that will be prevented by not smoking. This is important for policy – if we want health gains, and cost savings, soon then we need to do more to help middle-age and older smokers quit, as then health gains will accrue sooner. That said, tobacco tax should definitely be the backbone of any tobacco control package – just not the only component.

What about the impact of tobacco tax on health inequalities? First, a personal professional reflection. I cut my teeth as a social epidemiologist. I established the BODE3 Programme six years ago to simulate the impact of interventions on population health for many reasons. But a key reason was that I thought that as a social epidemiologist I could do more than ‘just’ analyse the past. I wanted to be able to estimate which policies reduce inequalities, and by how much, in the future. This paper is an important step in the realisation of that vision – we will be using the underlying model and data to analyse many other tobacco control and dietary intervention impacts on both overall health, but also health inequalities.

The BODE3 Tobacco Multistate Lifetable is run in Excel. The basic idea is quite simple – we simulate the whole population through one main ‘Lifetable’ tab (shown, with proportions of the living cohort also co-existing in up to 16 parallel disease lifetables. The tax intervention works by decreasing the incidence or inflow into these tobacco-related disease lifetables.

It should be obvious to you by now that I think this paper is important, that I am delighted that our BODE3 team is realising the vision of epidemiological forecasting of the impacts of interventions. Such new research endeavours do not just happen out of the blue. They take an ambitious idea that is then converted into do-able steps. My colleague Philippa Howden-Chapman is, I think, an outstanding exponent of this approach. She clearly settled on housing as an important mediator between social position and health, and something that can be acted on by policy. She then deliberately set in train an extraordinary series of housing and health studies. 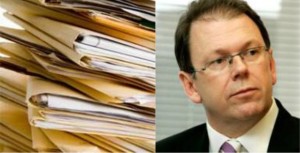 Back to BODE3. The vision all started with Stephen McKernan, when he was Director General of Health, telling me about the “100 manila folder problem”. At each annual funding round, 100 manila folders containing bids for funding in the health sector were on the table – and you could not meaningfully compare the proposed interventions as to what health gain they would achieve. I thought “we could help with that” by using epidemiological and economic methods to estimate health gain and costs for a range of interventions, using comparable methods.

The next step was Martin Tobias and I making a case to the Ministry to undertake a comprehensive Burden of Disease study (as that generates many of the comparable parameters we need in BODE3, in addition to being a mighty fine piece of analysis or research in its own right). We got the green light, I disappeared back to academia, and Martin successfully led what I think is one of the more important pieces of work by the Ministry in the last decade. Back in academia, I got busy conceptualising and designing, collaborating with the University of Queensland, and securing funding, to then model what impact health interventions done today might have into the future. Our paper in PLoS Medicine this week is an important realisation of that vision. We hope such analyses are both useful to policy makers, and informative to other researchers. Time will tell.