New Zealand’s Smokefree 2025 goal is now less than ten years away but we are unlikely to achieve this world-leading goal unless the Government introduces innovative new policies that reduce smoking prevalence (1). Existing measures have tackled different facets of tobacco marketing, with plain packaging reducing a potent form of tobacco marketing and excise tax increases making smoking less affordable. However, tobacco products themselves have received less attention. In this blog we outline findings from recent studies examining roll-your-own tobacco use and explore potential policy implications.

Roll-your-own tobacco (RYO) has increased in popularity, largely due to its cost advantages, which have persisted despite efforts to reduce differences in the excise tax on RYO tobacco and tailor made (TM) cigarettes (2). Many New Zealand smokers now use loose tobacco to make RYO cigarettes, which are typically around half to two-thirds the size of TM cigarettes (3,4). RYO use is higher among younger demographics, particularly young adults aged 20-24, where more than 60% smoke RYO, either exclusively (42%) or in conjunction with TM cigarettes (20%) (3). Among 25-45 year olds, RYO use (exclusive and with TM cigarettes) is 57%. RYO use is higher among Māori and NZ Europeans than among Pacific peoples (see figure below); people experiencing greater deprivation are also more likely to use RYO tobacco than smokers who experience less deprivation (3). Furthermore, New Zealand RYO smokers are also more likely than TM cigarette smokers to have co-morbidities such as mental health illnesses, illicit drug addictions, and risky drinking behaviours (5). 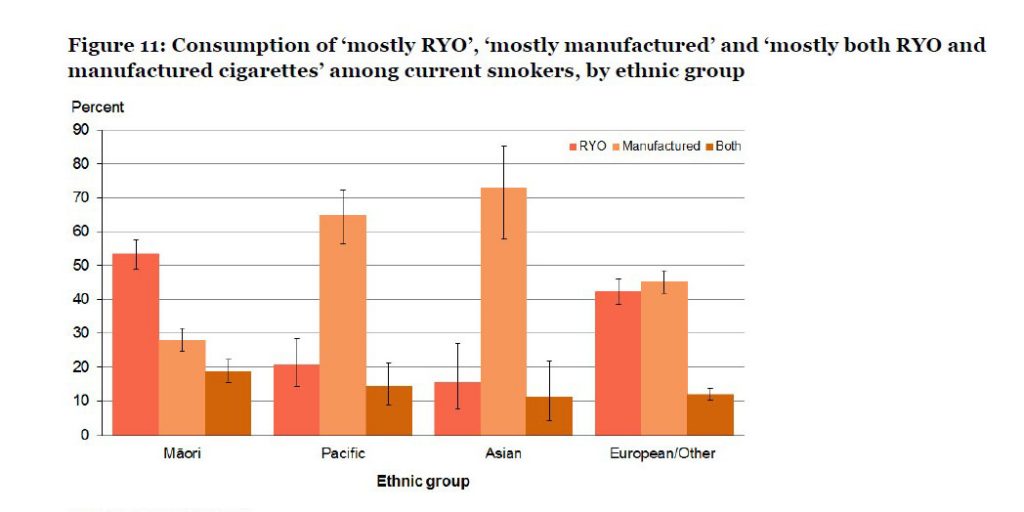 Yet while RYO tobacco’s cost advantage offers smokers an important benefit, this attribute has also contributed to unappealing stereotypes. For example, some studies report descriptions of RYO users as “[an] old, poor, grumpy bloke in a pub” (p. iii77) (10), or “socially dysfunctional individuals such as tramps and prisoners” (p. 772) (11).  These stereotypes present young adults with challenges, given the social identity young people wish to create and communicate does not align with older, heavily addicted and ostracised smokers (12-14). In a recent study, we explored how young people manage that tension and dissociate themselves with these unattractive stereotypes (15).

We identified two strategies: the association of beneficial attributes with RYO tobacco and the creation of usage rituals that elevate RYO to an artisanal product (16). Beneficial attributes our participants associated with RYO tobacco included its perceived superior taste and claims rolled cigarettes lasted longer than TM cigarettes. Several regarded RYO tobacco as less processed and containing fewer chemicals, and thus concluded it was more natural and less harmful than TM cigarettes. Earlier studies have also noted perceptions of RYO tobacco as more natural, an attribute associated with reduced harm (16).

However, young adult participants in our study did not simply associate positive attributes with RYO tobacco, they also developed ritualistic practices that offset negative stereotypes (16). They saw rolling as an “art” and “skill”, valued the personal flair rolling allowed them to demonstrate, and regarded the cigarette they had constructed as more valuable than a ready-made one, created without their personal input.

The creation of benefits that young adults associated with RYO cigarettes suggest this form of tobacco has evolved from a cheap product with an unattractive user stereotype into a hip item that communicates desired attributes. Together with evidence that RYO is incorrectly viewed as more natural and less harmful (16),  our findings suggest policy makers need to reduce the positive attributes young adults associate with RYO tobacco (15). We suggest they should increase the excise tax on RYO tobacco so it no longer offers smokers an alternative to quitting; they should also require excise taxes to be applied evenly to all tobacco products and brands. Excise taxes are a powerful policy lever and potentially reduce health inequalities (17,18), but the revenue gained should be used to foster the smokefree 2025 goal, by developing new interventions that better support smokers from more deprived communities to quit (19,20).

Second, policy makers should monitor perceptions of RYO tobacco. Findings that suggest smokers mistakenly believe RYO to be less harmful than TM cigarettes may support stronger interventions, such as banning RYO tobacco on the grounds it misleads and deceives smokers (16).

Finally, policy makers should consider how smokers evolve social practices and develop interventions that disrupt these. For example, packaging of RYO rolling papers and filters currently have no warning information and could be required to use the standardised packaging that will soon apply to tailor made cigarettes. Further, there is growing evidence that unattractively designed, or dissuasive, sticks have a highly aversive effect (16, 21, 22); rolling papers that featured warnings, such as a minutes of life lost graphic, could also challenge the evolution of hip identities.

RYO tobacco helps perpetuate serious disparities in smoking prevalence that undermine achievement of New Zealand’s smokefree 2025 goal. Evidence that RYO use is much higher among young adults and Māori suggests New Zealand requires bold measures, including a review of whether RYO should remain available.