Some statues are getting bad press at present – and rightly so for the Confederate military statues which represent the racist history of the Southern United States. But in this blog we briefly look at a particular New Zealand statue that we think characterises some of the best aspects of public monuments: the statue of Dr Margaret Cruickshank who died caring for patients during the 1918 influenza pandemic.

Statues commemorating the racist Confederate leaders of the American Civil War are getting bad press at present in the USA and internationally. Some have been pulled down or officially removed following the uproar over the General Robert E. Lee statue in Charlottesville. The controversy has also started to involve some memorials to US doctors whose activities can be regarded as unethical. Some New Zealand memorials have been similarly contentious. Among the most famous examples was the John Ballance statue in Moutoa Gardens, Whanganui. In 1995 Māori demonstrators beheaded and then removed the statue to protest the colonial Premier’s role in alienating Māori land [1]. There is also current day dispute about a memorial in Auckland to a colonial era soldier who killed Māori women. But in this blog we briefly focus on a public monument which we consider to have particular merit: the statue of Dr Margaret Cruickshank.

In Seddon Square, in the town of Waimate, South Canterbury, is a marble statue of Dr Margaret Cruickshank (see Figures). Dr Cruikshank was this country’s first registered woman doctor, and she died in the 1918 influenza pandemic while caring for her patients. The inscription on the 3 metre tall statue reads: “The Beloved Physician/Faithful unto Death”. Beside the statue is also an information board, which refers to the influenza pandemic and her death during it. This statue was apparently the first monument erected to a woman in New Zealand, other than Queen Victoria [2]. It was unveiled in a large ceremony in 1923. 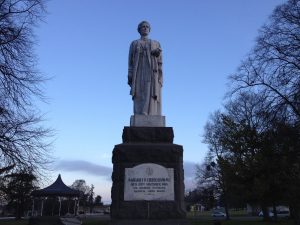 Why this is an important statue

This statue seems to us to be of value for several reasons. Firstly, New Zealand needs memorials to the 1918 influenza pandemic – to its victims, to its heroes, and as reminders to the living of the threat of future pandemics. Dr Cruikshank was one of those heroes, who risked her life to care for her patients. When the pandemic struck her community, Dr Cruickshank apparently “worked night and day, caring for the children of ill parents, cooking meals for them and even milking the cow of a family whose adults were too ill to do so themselves. Eventually she fell ill herself and died on 28 November 1918” (see Wikipedia and [2]). Indeed, in 2007 the New Zealand Ministry of Health named a pandemic preparedness exercise “Exercise Cruickshank” in recognition of her work during the pandemic. While we are not applauding dying in the pursuit of medical care in contemporary times (when we know so much more about infectious diseases and the use of personal protective equipment), we do feel it is important to recognise those dying in public service in the past.

There are also relatively few public memorials relating to the 1918 pandemic – as we detail in a survey that is currently “in press” [3]. This lack of such memorials is of particular concern given that our society needs to have reminders of pandemics as they are virtually certain to reoccur (typically several a century in the case of influenza). Sustained investment in pandemic planning is an important means to mitigate the impact.

Another reason why this statue is important is that it seems appropriate to celebrate the country’s first registered woman doctor. In 1897 Dr Cruickshank was the second woman to graduate after Emily Hancock Siedeberg, who was the first woman doctor to work in New Zealand – albeit briefly as a locum before travelling overseas, and who became registered when back in New Zealand in 1898 [4]. Dr Cruickshank was also the first woman to go into general practice in this country. She seemed to have been much loved by the community of Waimate, as when she subsequently left for the UK for further training “in a farewell speech she was praised for her freedom from pretence, her capacity for loyal friendship, and her gentleness, patience and unselfishness” [5].

Finally, we also consider that this statue has aesthetic value and adds cultural richness to the town of Waimate. The New Zealand sculptor, William Thomas Trethewey is famous himself for this and his other work (see Appendix). Perhaps therefore these type of objects can contribute to the social capital of a place by providing links to the past and reminding the populace of particular citizens who made great contributions to their community.

Enhancing the educational value of such memorials 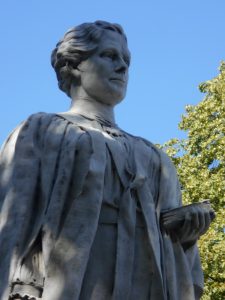 Very few statutes or memorials about past epidemics in New Zealand seem to be accompanied by an information board (at least from our observations). The information board in this particular case is valuable in providing additional context, and mentioning Dr Cruickshank’s role in the pandemic (which is not mentioned in the inscription on the actual statue). We suspect that such information boards could be used more widely at other memorials – especially those relating to the 1918 influenza pandemic.

The educational value of memorials could also be enhanced in the age of smartphones with the use of “quick response codes” on each memorial or on related signage. Linked websites could provide a summary of the wider events (in this case the pandemic) and a biography of the person (e.g., as per this website [5]).

Statues provide relatively eye-catching memorials, but other options exist as well. For Dr Cruickshank there is also:

In summary, this is just a brief look at one particular statue, which we think has significant value for multiple reasons. It should remind us that while it might make good sense to pull down some statues (see our additional notes in the Appendix), there is also the case for valuing those that memorialise citizens such as Dr Cruickshank.

Should some statutes be pulled down? We think yes for statues which represent figures who committed serious crimes and if the presence of the statue could cause additional suffering to many people e.g., can you imagine a statue of Hitler in any public place? But for some controversial statues there is a case for keeping them in some form so that they retain some educational value for showing societal concerns over time and for art history reasons. E.g., statues of Stalin have been put into“fallen monument” parks (e.g., in Moscow), though many have also been destroyed (sometimes after periods of ridicule with sausages regularly draped over the statue). If such statutes have added interpretive frameworks (as we have discussed above) – then the public can learn more from them about history, racism and social injustice.

The sculptor, William Thomas Trethewey. This sculptor [6], was probably New Zealand’s most talented home-grown sculptor of the 20th century, responsible for the 1938 Citizen’s War Memorial beside Christchurch Cathedral (described as NZ’s finest sculptured war memorial), the Captain Cook statue in Victoria Square, Christchurch (1932), and the Kaiapoi war memorial (1922). He also worked on the Massey memorial in Wellington (completed 1930). The Cruickshank statue was his second public commission (1923). He also carved a portrait of Sir Maui Pomare, Minister of Native Affairs, unveiled at Waitara in 1936.

0 Responses to “A Statue of Merit: Dr Margaret Cruickshank and the 1918 influenza pandemic”