I think I’ve finally got back into the rhythm of life in Dunedin after The Big Trip, so it must be time to get back to spending a little bit of my weekend documenting some of the goings on in the spineless world. Thankfully, having gone to visit the summer I’ve got quite a cache of bug photos to keep the series going

Let’s start by interrupting this couple, who I found enjoying summer amongst the flowers on the University of British Columbia’s very impressive campus: 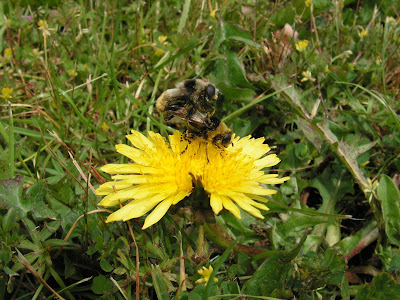 At first glance I thought I’d stumbled across a pair of mating bumblebees. But it’s really the wrong time of year, bumblebee mating is usually restricted to the end of summer. As the days get shorter and cooler the flowers that keep a bee hive become in short supply. Honeybees get through the winter by hunkering down, but bumblebees skip it altogether. The sisterhood that runs a bumblebee nest sends out queens and males (drones) towards the end of summer, once she’s mated the queen hibernates and emerges in the spring ready to set up a new nest. So, not quite sure what I was looking at, I took a closer look. 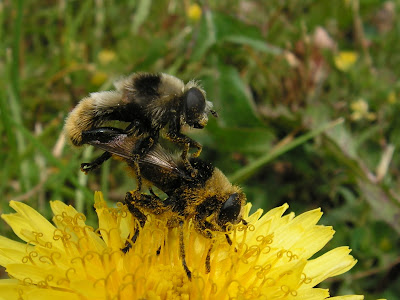 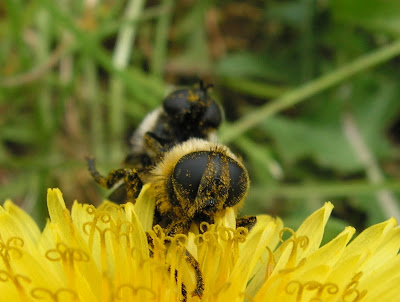 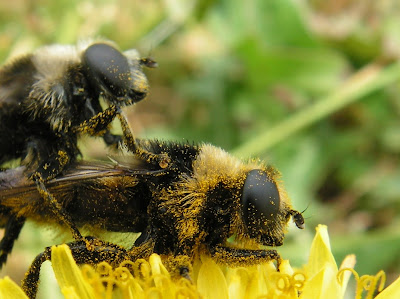 These are flies! I think, in fact, that they are hover-flies. The bee-like appearance is no coincidence, these flies are an example of something biologists call Batesian mimicry. Despite a widely held belief to the contrary, bumblebees pack a pretty mean sting and at least some would-be predators stay away from them as a result. By appearing enough like a bumblebee to fool birds these flies get the benefit of bumblebee’s sting without having to pay the cost of making the venom. Hover-flies in particular make good mimics, there are species that specialise in aping wasps and honeybees and indeed there are other bumblebee mimics.

I’m afraid I can’t say very much more about these particular flies, after all the Pacific North West’s fauna is entirely new to me. Perhaps the dipterous and the British Columbian wings of the of the bug-blogosphere can at least give them a name. As always, the images link to higher resolution versions.

0 Responses to “Sunday Spinelessness – Love and deception in Vancouver”