Ok, I let my Sunday get completely out of control, so here’s a very quick Sunday Spinelessness. Behold, the Worm of the Future! 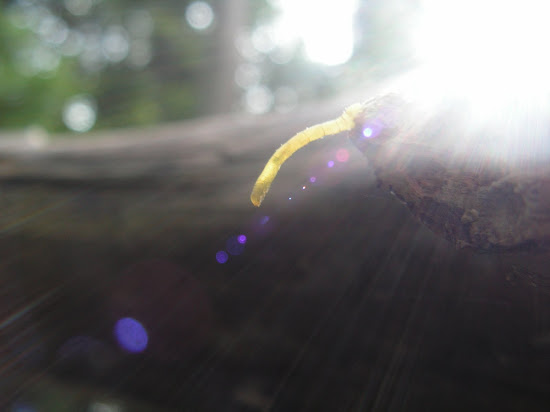 Err, actually I found this little caterpillar in one of the smaller paths in Stanely Park in Vancouver. As every schoolboy knows, all insects hae six legs, but most caterpillars supplement their “true legs” with a set of porlegs along the length of their body. The prolegs are quite different to the jointed true legs, they act more like the legs of onchyphrans, moving in ripples down the body to move the caterpillar . But caterpillars like this one, which grow up to become geometer moths, don’t have prolegs along their whole body, just a few at each end. They get around by alternatively extending their bodies forward with the hindlegs clasping a surface and dragging themselves forward with their forelegs hanging on. This unique way of moving makes geometer caterpillars look like they are measuring out the set distance along a twig, which has earned them the name “inchworm” (and in fact, geometer means “earth measurer”, making these moths among the very few insect groups named for their larvae)

I framed this photo to try and show one of the inchworm’s characteristic behaviours; when they feel threatened the cling to a branch with one set of lets and extend themselves out. Impersonating a twig. Once I realised there was going to be no way of getting the shot without getting a bit of lens flare I decided to go all out for the science fiction movie meets mid 2000s web design look. I quite like it.