I hate agapanthus. Really, district councils’ and home gardeners’ obsession with those dull plants must put them alongside geraniums as the most over-planted under-interesting plant in the country. So it’s with some chagrin that I tell you that a clump of these banal flowers is the abosolutley favourite hangout for spineless creatures in our garden. The ichneumon in this post is poised on an agapanthus leaf, and I’ve seen several others wasps, aphips, leaf hoppers, three species of jumping spider, lots of moths and a few beetles among those green swords. But the most interesting creatures to make their home among the agapanthus are these tiny green spiders. 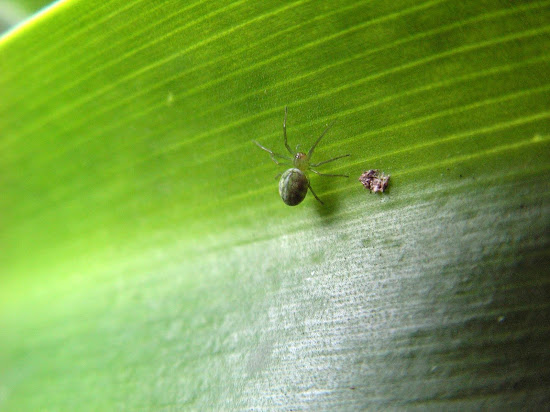 At different times over the summer I could find five or six different imdividuals like that one, living on the the tip of agapanthus leaves. So I started sticking my head into the agapanthus plants a bit more often, and even keeping few notes to track what these guys were up to. In that time I managed to record a few interesting behaviours. Males and females cohabitate (the male is the one in focus here): 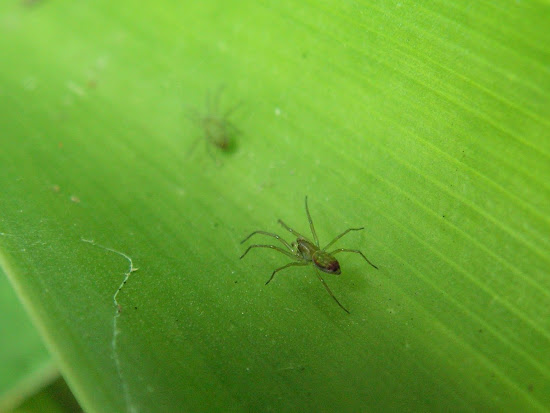 They eat aphids and small flies: 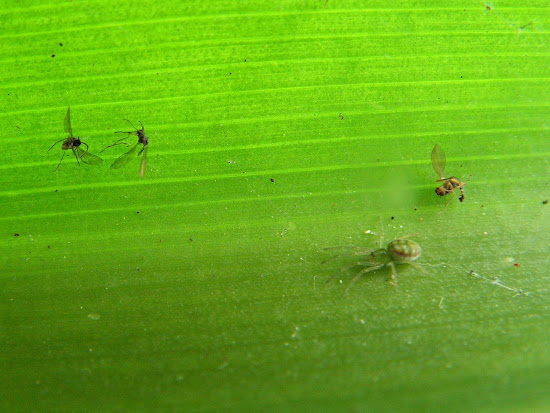 They spin a silk “retreat” to hang out in (though, this doesn’t appear to be associated with moulting as they are in some other spiders): 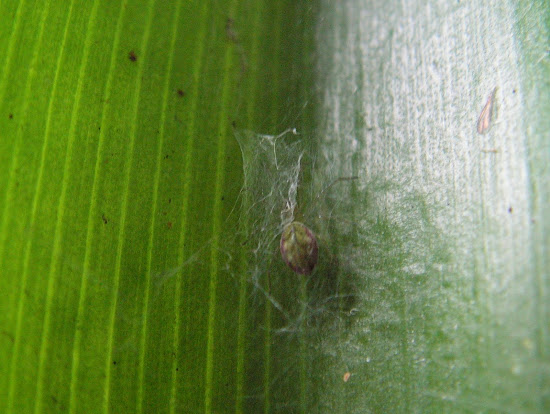 And they lay their eggs in in disc-shaped egg sacks with raised edges. 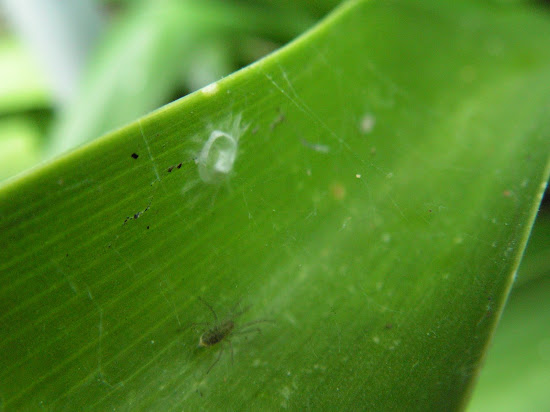 On one rainy day I saw a female running down to the water pooling inside her leaf, collecting a mouthful of the rain then scurrying back to her egg sack. Once there, she deposited the water around the outside of her egg sack before heading back for another mouthful and repeating the process.

All those observations are tiny little data points that might, if there were written up for a little journal like Weta, help anyone who decided to seriously take up the study of these spiders, or the distribution of these behaviours among spiders as a group. To be really useful those observations need to be tied to a name, after all, species are the fundamental units of biodiversity and each of the observations above are the property of a species. I just don’t know which species. These spiders are definitely from the family Dictynidae, and they fall into either the genus Paradictyna or Viridictyna. That’s where things get a bit interesting.

Both Paradictyna and Viridictyna were described by New Zealand’s preeminent arcahnologist, Ray Forster, who lived right here in Dunedin. The two genera are actually pretty easy to differentiate, “virid” means green and Viridictyna are green with white chevrons on the top while Paradictyna can have purple markings on their abdomen (Forster actually calls them “one of New Zealand’s most handsome spiders”). If you look up there you’ll see “my” spiders have purple on their abdomen, so they must be Paradictyna right? Well it’s not quite so simple, Paradictyna hasn’t been recorded south of about Christchurch (close to 400 km away). New Zealand spiders might be chronically under studied but remember Forster lived in Dunedin, the original descriptions of these spiders include collections from all over the city and if they’d been common in Dunedin gardens at that time surely he would have found them!

So, what are these spiders? They might be one of the Viridictyna species Forster described, in which case the simple rule (purple = Paradictyna) will have to be updated, it’s probably more likely that Paradictyna have moved south to Dunedin, it’s even conceivable these guys are undescribed species. To really work out which of these cases is true you’d have to look at internal and microscopic anatomy of spiders, and I’m certainly not qualified to do that. This is the bit where a dedicated scientist, as opposed to someone poking his head in a bush once a week, would say he took a couple of these spiders dropped them in 70% ethanol and sent them to someone who knows there way around the inside of a spider. Taxonomists are sometimes criticised for their willingness to kill the creatures they study and fill museum shelves with specimens that might never be looked at again. But the major pieces of research I’ve been involved have relied utterly on being able to go to collections that were dealt with by pioneering systematists like HB Baker and JT Salmon (you can tell they’re old because they have initials for names) and apply tools those scientists couldn’t have dreamed off to their samples. Even if I’d simply put my spiders in ethanol with a descriptive tag and sent them to museum the location, date and behaviours of these spiders would be linked to a specimen that could be inspected by anyone who was interested. Who knows, maybe it would help someone PhD student in 60 years time!

But of course I didn’t sacrifice any of these spiders. It was too much fun for a geneticist like me to be playing field biologist for a while and I kept thinking, “I’ll just keep watching them a bit longer”. And now they’re gone, I don’t know if the wasps that hang out in the agapanthus did for them if they’d just done their job, seen their eggs will hatch, and shuffled off. The eggs have hatched now, so I’ll keep sticking my head in those boring leaves, but for now it’s an opportunity lost.