Eyes evolved once. That’s the headline conclusion from a recent study of the genetic basis of the development of eyes in jellyfish. If you want the details the ever-awesome Ed Yong has them, so I’ll just offer a prÃ©cis here.

Building an eye is a complex business. Developmental biologists have uncovered a whole series of interacting networks of genes that work in concert to turn a piece of neural tube into your peepers. In just about all bilaterians (that is, animals other than cindarians, ctenophores and sponges) the whole process has one master switch – a gene called PAX6. The pax genes are a family of transcription factors(genes that drive the expression of other genes) that act to define regions on the animal body during early devlopment. The eye-establishing function of PAX6 is so strongly conserved that you express the mouse version of this gene in a Drosophila larvae and set off the eye-building networka(leading to the development of ectopic eyes). In the recent paper researchers went looking for PAX genes in one of the deeper branches of the animal tree, the Cnidaria (comprising corals, anemones and a diverse collection of creatures we usually call jellyfish).

On my recent visit to Vancouver I made it to that city’s impressive aquarium (tourist tip: go early or line up for a long time). They have sea otters and dolphins and beluga whales but, true to form, I was most taken by the jellies: 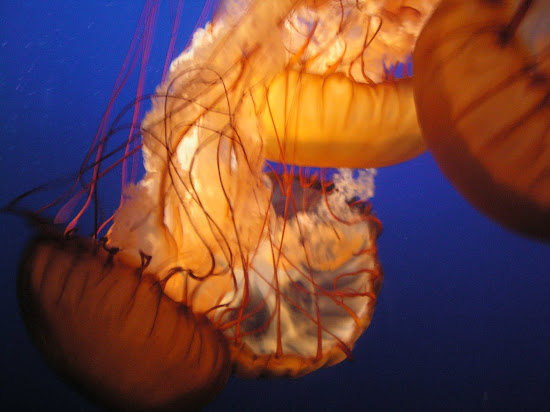 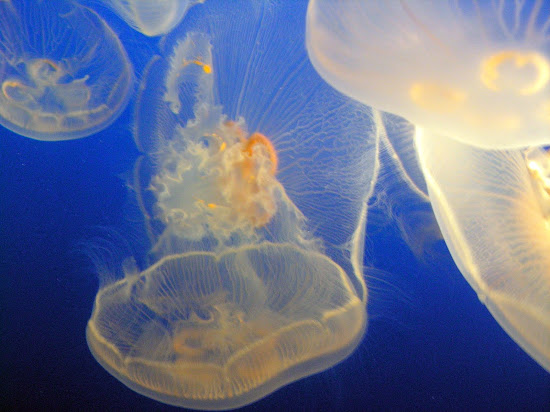 Above you have sea nettles (Chrysaorasp sp.) and below the moon jelly (Aurelia aurita) and my photos hardly do them justice. They were just stunning. My photos also fail to record and important detail, jellies and other cnidarians have eyes. Or at least tiny “eye spots” which are capable of detecting light, if not casting a focused picture of the outside. So,with the sequence of another cnidarian’s genome (the starlet sea anenome, Nemaostella vectiniss) as a starting point researchers went looking for PAX genes in the development of that eye spot. They found them in the familiar role, the master switch, but interestingly it’s not the PAX genes most closely related to PAX6 that are doing the work. In two different lineages of jellies, the Hydrozoa and the Cubazoa (neither represented above I’m afraid) two different PAX genes are setting the eye making machinery to work. The authors conclude that eye development was originally controlled by suite of PAX genes acting together with a degree of redundancy with each lineage – the Hydrozoa, the Cubazoa and the bilaterians – subsequently losing that redundancy and leaving just one of the PAX genes to act as the master switch. Sounds reasonable to me (but check out a criticism of the idea in comments to Ed Yong’s post) but the diagram they use to illustrate that idea is awful :

Who could imagine animals as wonderful as the cnidarian photographed above, or the sponges I wrote about here or Drosophila were side branches from evolution’s mainstream. Yuck. Anyway, I fixed it: