I’ve been going at this Sunday Spinelessness thing for the best part of year now, in that time I’ve been able to cover a decent amount of the diversity among animals without spines. But up until today there was one clearing omission, so here is The Atavism’s first bug: 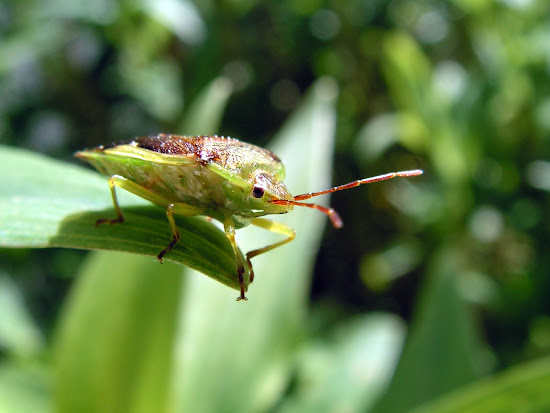 In day to day speech we use the word ‘bug’ to describe any creeping, crawling or flying creature that happens to have its skeleton on the outside It would take a taxonomic pedant of the highest order to object to that usage, but ‘bug’ can also refer to a specific insect order. The Hemiptera are a group of insects with mouthparts specially adapted to sucking. Cicadas, plant hoppers, bed bugs, aphids, scale insects and water striders can all be called “true bugs” as can the star of today’s post. It’s a member of the shield bugs, or Pentomidae. Both those names refer to the shape of these bugs’ bodies: 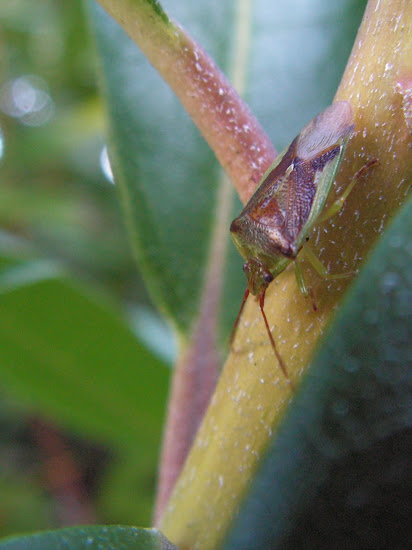 Like most insects, bugs have two sets of wings. In the shield bugs the base of the forewings is very leathery and sits over top of the much finer and membranous hindwings whcih are used for flying. This particular shield bug didn’t seem to the least bit interested in using its wings, I picked it up from the garden path (where I very nearly stood on it) and was quite happy for me to pick it up and drop it off on some plants for a photo shoot.