You see some pretty impressive photographs in bug-blogosphere. People like Alex Wild, Adrian Thysse, Ted MacRae and Mike Bok use impressive gear, and much more impressive skill, to serve up wonderful shots of the smaller inhabitants of the natural world. Not so much here. Photographing the subjects for these posts greatly increases the joy that I get from observing their lives, but I don’t claim to have any real skill and, except for that one time, the photography around here is all point-and-shoot. But I’ve never shared anything quite as amatuer as the photos I’m about to show you.

Earlier this year I bought Ray and Lyn Foresters very cool book on New Zealand spiders, and read about the genus Celaenia, the members of which spend their evenings dangling from a thread impersonating a female moth (in both look and scent) in the hope of making a meal of a male moth. I thought I should spend at least part of one of my evenings seeing if I could find any Celaenia in our garden. And so it was that I found myself out in the cold shining a flashlight into bush after bush looking for spiders and discovering only a bright yellow slug: 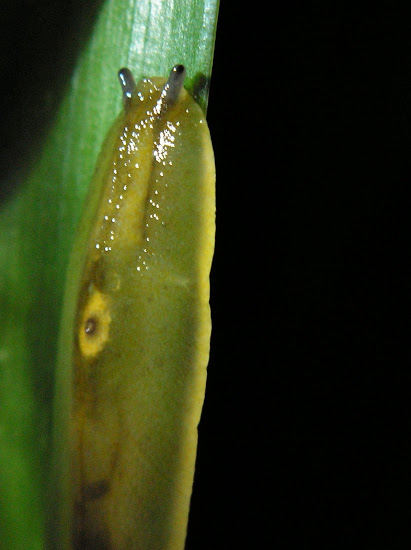 At first glance I presumed it was one of those lettuce destroying introduced species, perhaps Limax flavus, but most of the slugs introduced to New Zealand have cylindrical bodies and pronounced mantles (the organ that would have made their ancestor’s shells and ends up looking a bit like a saddle on the front of the slug) and this one is flat and has no obvious mantle. In fact, this is native slug, from a pretty cool family. So, I just had to try and photograph it. There is no way the flash on my camera can illuminate a subject less than a few metres away, and no way its lens is going to record any details in a subject more than a few metres away. So, i stood outside, in the dark, with one hand pointing a flashlight at a slug and the other holding my camera away from me, with neck strap held taught in the hope this pose would stabilise the camera enough to get some sort of shot to share with you. It’s really a miracle I got anything from about ten minutes of that farcical photo-shoot, but here you go: 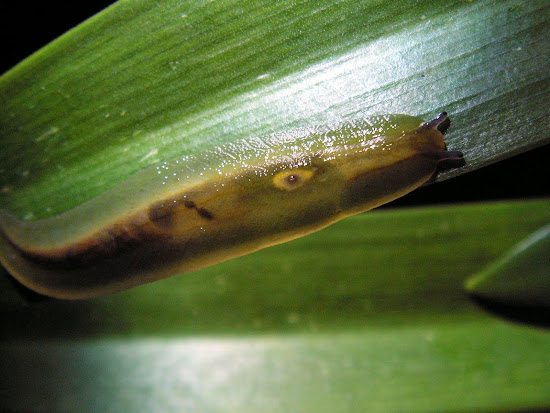 Now you can make out the patterns that give these slugs their common name – the leaf veined slugs ( I have no idea what the taxonomic name for this family, Athoracophoridae, refers to). This species, probably Athoracophorus bitentaculatus doesn’t have the prominent colouring that some if its relatives do, but you can still see the “veins” as furrows running through the rougher parts of the slug’s skin. We have about thirty species of of leaf veined slugs in New Zealand and, like most of our land-living molluscs, we don’t know an awful lot about them. Massey University’s “soil bugs” site (which is pretty awesome by the way) has a gallery of leaf-veined slugs, which includes surely the cutest mollusc you’ll see today.

Lately I’ve been spending one day each week in the lab dissecting the landsnails that are the subject of my PhD. The most common question I get from labmates and anyone that asks what I’ve been up to lately is “how do you know which bit is which”. I understand the sentiment, because looking back on my notes I clearly had no idea when I started, but I think between Aydin Orstan’s photos and a side-by-side comparison of this slug with this diagram of its internal anatomy you can at least get a feel for the lay of the land.