I’m going to round out Sunday Spinelessness for 2010 with a few updates from the creatures that have featured here over the year. But, since this is going to be last post here till the first week of January or so, I’m going to start by taking just a moment to wish everyone who has commented on, linked to, tweeted about or just read The Atavism this year a merry Christmas and an enjoyable break over the new year. I enjoy writing these posts for their own sake, but it’s much more satisfying to be part of a community (no matter how small a part!) of people that are interested in the same ideas I am. Thanks.

Right, now own with the spinelessness. The little green spiders I’ve been following, and sacrificing in the name of science are still going strong. Since the last time I wrote about them I’ve seen them grab prey for the first time (confirming the suspicion that they are ambush predators) and seen males fight for the right to mate with a female. Sadly, I didn’t photograph either of these events (well, not in a way that I’d want to show other people, but there are descriptions of each tucked away in my notebook). I can, however, show you the result of those matings. About three weeks after the first one I started spotting these across the agapanthus: 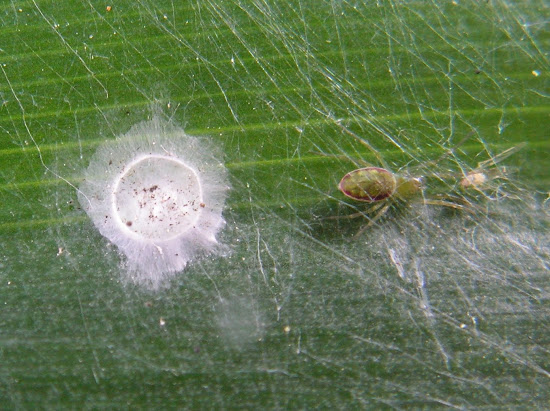 At last count there were about five separate leaves sporting one of these egg sacs and a watchful mother. One very dedicated mum-to-be actually has three on the go at the moment!

I’ll have to wait a while to see the next generation of the little green spiders, but the leaf-veined slugs that featured along side them here have already moved into the next stage 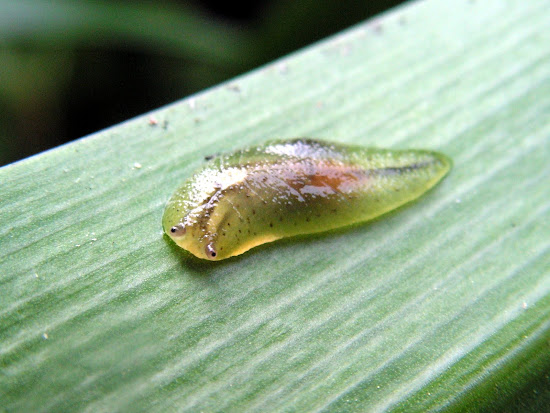 I haven’t seen a full-sized slug in a long time. But these immature ones are out and about every evening, I’ll have a little more to say about them in the new year.

The pittasporum “pysllids” are still dancing, but no longer at plague proportions. There’s no respite for the pittasporum though, now it’s being devoured by leaf roller moths. If I cared more about the tree I might spray it with insecticide but while its pests are feeding animals as wonderful as this spider (anyone have a clue on an ID?) I’m happy to let them have it: 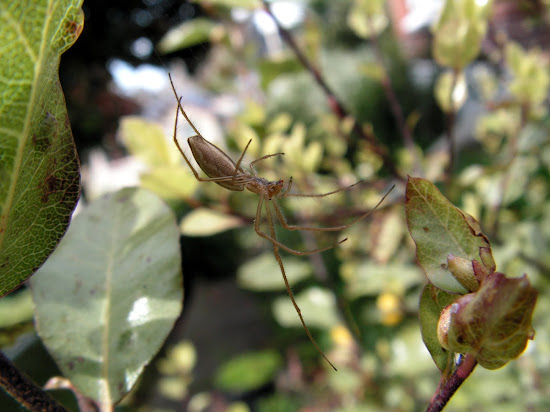 Finally, the bumblebee nest at the bottom of the garden appears to be enjoying the run of hot weather we’ve had here. Some of the bees in our backyard (no necessarily the ones that live at the bottom, since bumble bees can forage several kilometres from their base) have taken up a slightly odd habit. On a couple of warm evenings I’ve popped outside and found bumblee bees asleep inside foxglove flowers: 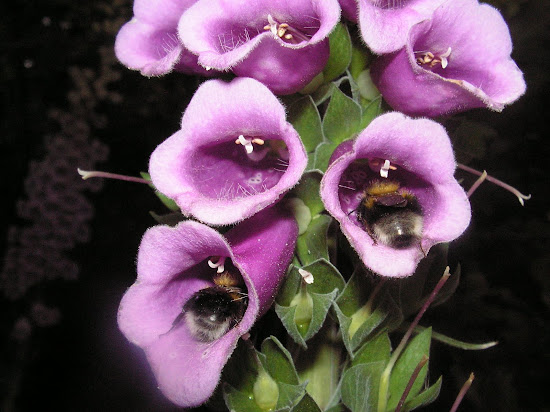 No doubt the little tubes make a nice warm place for a worker to spend the night if they are caught out too late to make it home. Apparently males, which are only produced towards the end of summer, will often do the same trick once they’ve left the nest and are spending their daytime waiting for a virgin queen to pass by. I think we really have to end with a bumble bee bum sticking out of a flower: 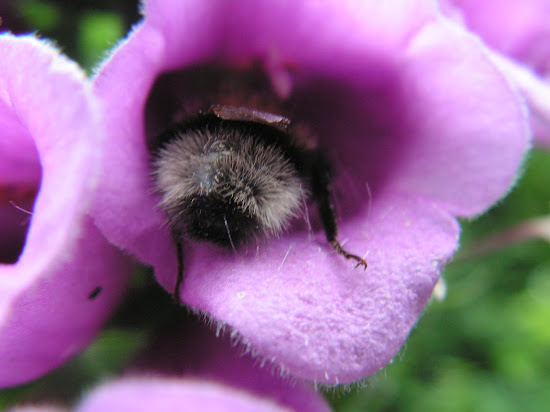