As promised, it’s time to add a few tropical invertebrates to the mix of more temperate bugs I usually talk about here. Let’s start by redressing a bit of an imbalance in these Sunday Spinelessness posts. Up until now I’ve only written two posts about beetles, which something of an under-representation since about a quarter of all described species are beetles. I see plenty of beetles around our garden and in my travels around Dunedin, but few of them are large enough, or sufficiently cooperative, for me to get decent photographs. I had no such problem in Vanuatu.

For a start, there was the daily invasion of giant scarab beetles. Around 6 o’clock each morning a wave of massive bumbling beetles would arrive at one of the coconut betel nut palms surrounding the house at which we were staying. If you stood under the tree and looked up all you could see was the yellow-bodied beetles moving about and a rain of white stamens falling down from the flowers they were busy destroying. The beetles that came late for the feast set themselves up in the shrubs underneath the palm to scavenge what they could, and were quite happy to pose for photographs: 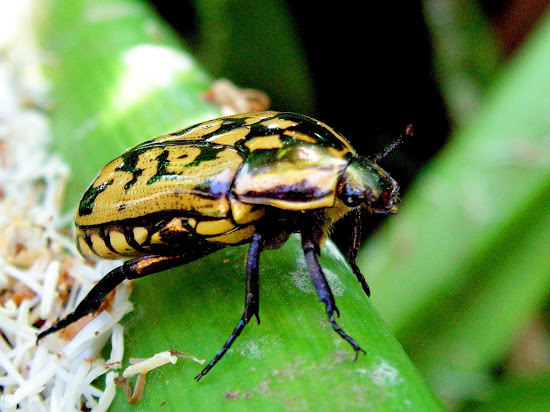 A few of the latecomers even got a whole flower for their patience: 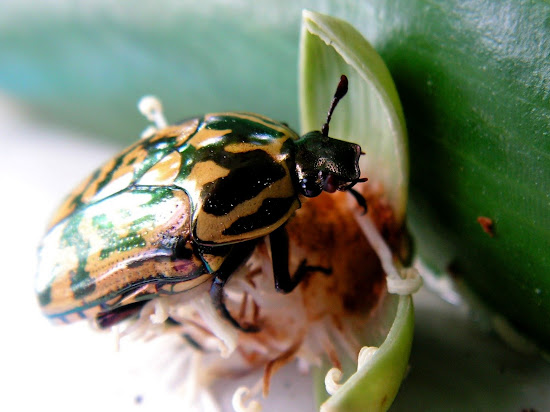 I can’t identify these beetles to species. Their stout bodies and legs and their particular ‘clubbed’ antennae mark them out as scarab beetles (family Scarabaeidae). That’s the same group as most well known of our native beetles the excitingly named “brown beetle” more famous for its larvae which we call grass grubs. The only extra bit of information I have on them is from this post summarising a discussion on a mailing list that deals with emerging crop pests. It seems they’re a known problem in Vanuatu, and taxonomists have at least got as far as placing them in the subfamily Cetoniinae, which are sometimes called “flower chafers”. From the point of view of a snail geneticist (and not a beetle taxonomist) they actually look very similar to an Australian Cetoniine species, Eupoecila australasiae.

Had I known they were such a problem for commerical coconut growers I might have spent less time rescuing these beetles from the swimming pool. Their attraction to the bright-blue sheet of water proved lethal more than a few times, but it did make for some great photo opportunities: 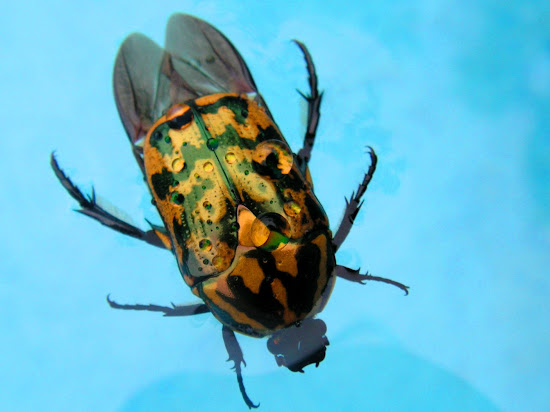 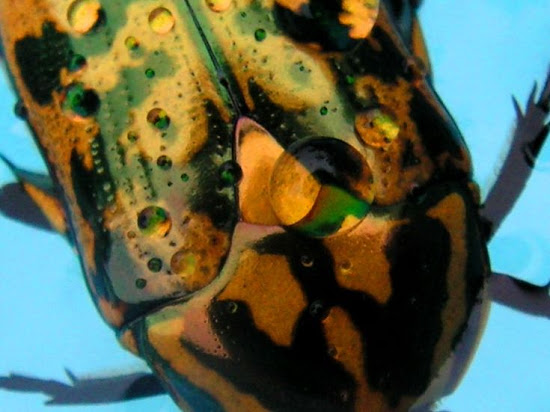