Time for another tropical beetle from Vanuatu, and what could be more charming than a ladybird*? 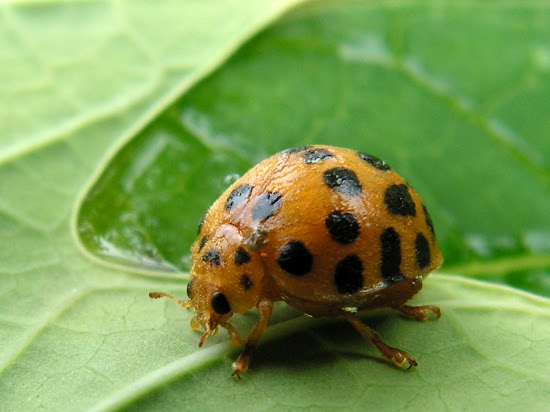 Or its absurdy spikey larvae? 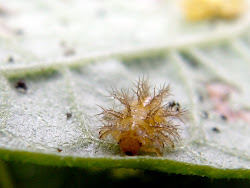 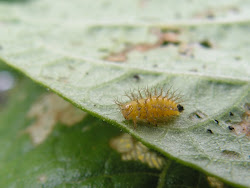 This ladybird is probably a bit larger, a bit rounder and a bit oranger than the ones you are used to seeing in your garden. The more familiar ladybirds are more that just a pretty set of elytra, they’re a force for good. Both the larvae and the adults of most of the familiar red and black ladybirds eat aphids, so having a few around in your garden saves on insecticide: The big orange ladybird in that first photo is not nearly so helpful. It’s Henosepilachna vigintioctopunctata**, commonly known as the 28 spotted ladybird or the hadda beetle. The hadda beetle is a major agricultural best, because both the adult and larval stages are herbivorous and have a patricular liking plants of the family Solanaceae. That means potatoes, tomatoes, eggplants and (worst of all?) chilies can have their leaves skeletonised by beetles, and a beetle infestation can reduce a year’s crop by up to 25% if not controlled. 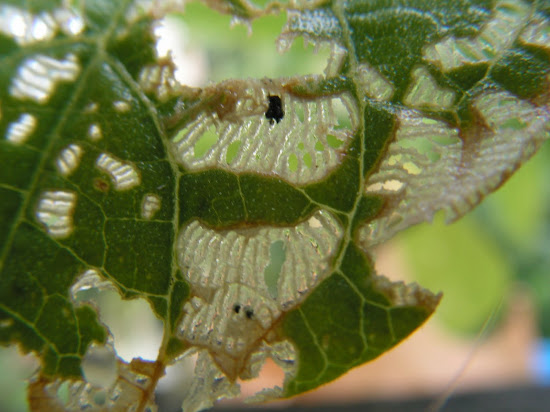 Take another look at that chewed-over leaf. Now imagine that each of those small white sections to the left of the photograph is a brand new island in a green ocean. In almost no time at all, winds would carry seeds to our little archipelago and life would start to claim the bare rocks. But we don’t know which plants would make it. Dispersal and colonisation are random events, each island would collect its own subset of the seeds drifting past , and so start to develop its own flora. Once those plants have taken hold, the rain of wayward and drifting insects (and even snails) that fall everywhere on earth would have a chance to establish themselves. Again, the isolation of our islands means different species will fall on each one, and different ecological relationships will start to form. Our islands might survive for 20 million years before they’re reclaimed by the sea, and in that time the unique beginnings of each island’s ecosystem will mean a different evolutionary history will play out. In this way islands are evolutionary experiments, and island ecosystems have given risr to some of evolution’s weirdest creations – isolation from the mainland has let iguanas become marine animals, finches become vampires and pigeons give up on flying.

But islands are no longer isolated from the rest of the world. The hadda beetle is probably native to Russia and, without humans moving plants around, would never have had a chance of making it to a Pacific islands. Now it lives in almost all the way across the tropical Pacific (here’s a terrible photo of one I took in Rarotonga, 3000km away from Vanuatu): 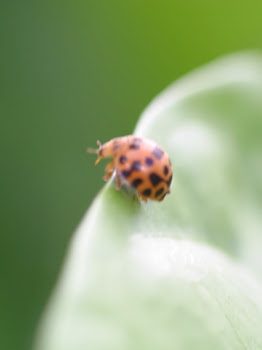 In fact, there is an entire “tramp” assemblage including, but hardly limited to, big-headed ants, mynas, land snails, centipedes, paper wasps and mile-a-minute weed that can be found almost everywhere you find people in the tropical Pacific. These Pacific-wide introductions have pushed out native species, and together they have replaced some of evolutions most exuberant expressions with a bland mono-culture. The problem is not quite as bad as it might seem. The tramp species are mainly moved about by commerce, so many of the introduced species are associated with agriculture or at least lowland environments. In most islands, as you climb higher you find a more ‘native’ flora and fauna (for instance, all the partulid species left in the Society Islands are restricted to mountain tops).

By the way, the hadda beetle’s bid for world domination continues: last year it was recorded in New Zealand for the first time. It’s known to have set up shop in Auckland, but if you find hadda beetles somewhere else MAF might want to know about the invasion’s spread.

*That’s “ladybug” in American English, coccinellid or “lady beetle” among scientists and “ngoikura” in MÄori