So, last week my little old blog found itself in the middle of a national discussion abuot Ken Ring and his claimed ability to predict earthquakes. In this space of two days that post recieved a good deal more than a year’s worth of The Atavism’s normal traffic.

And now I have to tell anyone that subscribed to this blog in the wake of that article, hoping perhaps that I’d follow the news of the day and provide analysis of the key claims, that I mainly blog about bugs. I’m an invertebrate fan boy, and dedicate a post a week here to celebrating some creature from that ignored majority. Ninety five precent of animal species don’t have a backbone, and the spineless multitude contains some of the most amazing creatures on earth.

Today, I’m going back to photos I took in Vanuatu over christmas and looking at my very favourite group of spiders – the jumping spiders (family Salticidae). Spiders get a bad rap generally, almost none of them pose any threat to us*, and absolutely none of them are going to go out of their way to get us. Some spiders, like the long-legged big-fanged Cambridgea in this post, seem to set of a revuslion somwhere deep within our brains, but others are just down right charasmatic. Jumping spiders are the puppies of the arachnid world: cute inquisitive and apparently unaware of how small they are. I’ve written about the group before, so lets skip right to the photos: 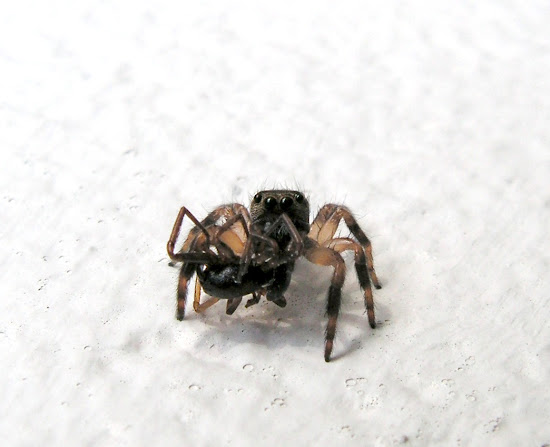 The big round forward-facing eyes are one of the charactersitc traits of the jumpers, because they are active hunters these spiders need to be able to cast a finely-focused image of their prey. Obviously, this one has used its eyes to good effect, I can’t tell what it has clamped between its jaws (or chelicerae, if you want to be accurate). It has eight legs, which makes it a fellow arachnid, the body looks a little mite-like but the legs seem too long for that identification so I’m afraid I can’t tell you anything more.

As much as it pains me to put up photos with zero taxonomic information, here’s a another jumping spider of unknown affinity. This one was truly tiny, perhaps 3mm across the body, but quite happy to have it’s host plant bent out of shape to allow a camera to intrude 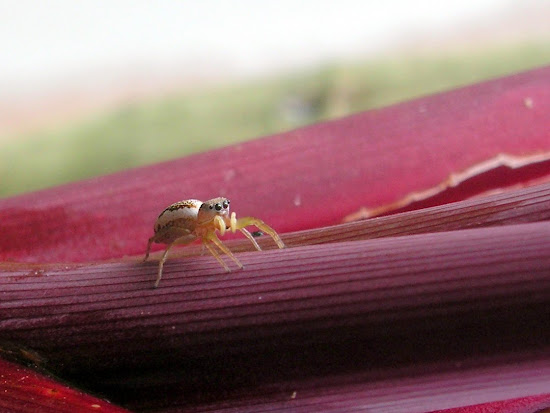 That’s it from me today. You should know that people much more skilled than I am have taken some terrific photos of jumping spiders. Alex Wild has a stunning ant-mimicking spider here, and Thomas Shahan is the acknowledged master in this field. Here’s one example of his focus stacked images: