We’ve had a stunningly beautiful day here in Dunedin. It’s been feeling pretty autumnal around here lately, so there was no way I was going to spend any more time in front of a keyboard than was strictly necessary. As a result today’s post is going to be short, but, I think, rather sweet. The insects in our garden seemed to be enjoying some summery weather too. Like this bumblebee I caught visiting a Tradescantia flower. In this shot you can see the ocelli – the set of “simple” eyes on the top of the head and gauge the intensity of light. 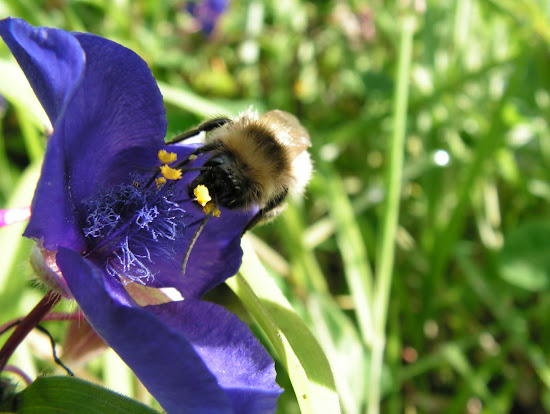 In this photo you can see the feature that brought these bees to New Zealand. 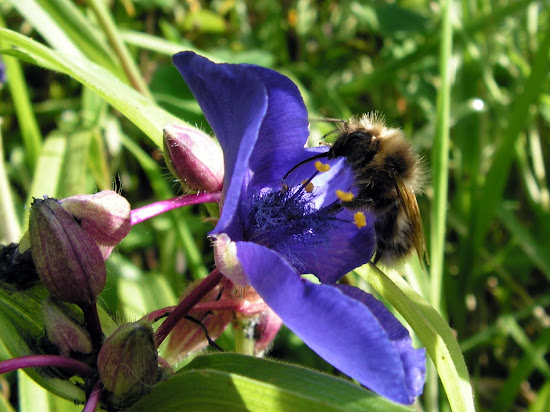 There are a few native bee species in New Zealand, but none of them have a tongue quite like Bombus hortorum, and that’s why we have bumblebees. European settlers tried to introduce red clover as a pasture, but the native bees and the (already introduced) honey bee couldn’t reach into the flowers well enough to pollinate them. This meant early farmers had to import fresh seed almost every season, and were desperate to work get clover to set seed. An English naturalist by the name of Charles Darwin had talked about the pollination of red clover in a little book called The Origin of Species:

From experiments which I have tried, I have found that the visits of bees, if not indispensable, are at least highly beneficial to the fertilisation of our clovers; but humble-bees alone visit the common red clover (Trifolium pratense), as other bees cannot reach the nectar *

Evidently, someone in Canterbury had read their Darwin, so the acclimatisation society asked their contacts in the UK for some queen bumblebees to establish local populations. In the end four species (B. hortorum, B. terrestris, B. subterraneus and B. ruderatis) took hold and now the lovely baritone buzz of bumblebees fliting from one flower to the next is a part of summer in New Zealand.

The acclimatisation societies which were set up in New Zealand were basically ecological vandals, introducing familiar European species with no thought to what they’d do the native inhabitants . These are the people that introduced trout to our streams (decimating native fish species) and stoats and weasels to our forests (driving native birds to extinction). So, it feels bit odd to say that, in the case of bumblebees, the acclimatisation societies actually did something very good. Bumblebees are attracted to big showy flowers of the sort our native flora is lacking in, so they don’t displace any native species in forests and their introduction has come an no cost to our native ecosystems. Even better, the thriving populations of bumblebees in New Zealand have the potential to rescue the seriosuly unhealthy populations from which they were sourced . One of the introduced species, B. subterraneus, is now presumed to be extinct in Britain and all of the others are declining due to habitat loss and the overuse of pesticides. Last year, members of the British Bumblebee conservation trust came to the South Island to collect mated queens in the hope of establishing new populations of these bees back home. I gather that particular mission didn’t work out, but, if the causes of the bumblebees’ decline in Britain can be turned around our bees will be the prefect stock from which to re-establish these species.

*The section from which this quote is pulled is and interesting in that it’s one of several proto-ecological ideas in The Origin. Here it is in full:

From experiments which I have tried, I have found that the visits of bees, if not indispensable, are at least highly beneficial to the fertilisation of our clovers; but humble-bees alone visit the common red clover (Trifolium pratense), as other bees cannot reach the nectar. Hence I have very little doubt, that if the whole genus of humble-bees became extinct or very rare in England, the heartsease and red clover would become very rare, or wholly disappear. The number of humble-bees in any district depends in a great degree on the number of field-mice, which destroy their combs and nests; and Mr H. Newman, who has long attended to the habits of humble-bees, believes that ‘more than two thirds of them are thus destroyed all over England.’ Now the number of mice is largely dependent, as every one knows, on the number of cats; and Mr Newman says, ‘Near villages and small towns I have found the nests of humble-bees more numerous than elsewhere, which I attribute to the number of cats that destroy the mice.’ Hence it is quite credible that the presence of a feline animal in large numbers in a district might determine, through the intervention first of mice and then of bees, the frequency of certain flowers in that district!

0 Responses to “Sunday Spinelessness – Why we have bumblebees”