It’s about time I stopped drip-feeding these Vanuatu photos and presented the “best of the rest”.

I’ve had a very tough time trying to identify most of the bugs that I came across in Vanuatu – there aren’t really any resources dedicated to invertebrates in Vanuatu or even Melanesia in general so it’s a matter of trying to ID each creature as far down the taxonomic scale as possible then hope there is something recorded for that taxon in Vanuatu. Thankfully, I got a helping hand in idenfying this odd looking fly: 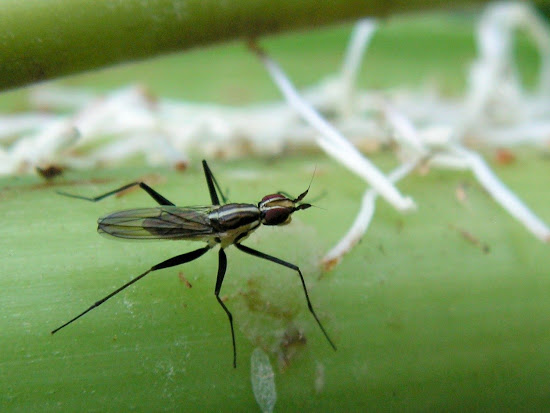 Ted MacRae encountered a similar looking fly in his travels through Brazil (and took a much better photo, you shold check it out) and he had the skill and the perserverance to work out his fly was from the family Neriidae (sometimes called cactus flies or stalk legged flies).

Evidently, the feature that seperates Neriids from realted families is the bristle like “arista” on the top of the antennae which is nice and clear in this photo. Neriid species from the genus Telostylinus have been recorded from New Caledonia (which is adjacent to Efate, the island on which were staying in Vanutatu) and the black and white stripes on this fly suggest its from this genus. If you look at Ted’s photos, you can see the forelimbs of male Neriids are spiked, a feature you usually see in predators like crab spiders and robber flies which need to grab and hold their prey. Neriids eat rotting plant material, which is unlikely to escape their grip. It seems the spikes are used when males wrestle and strike each other in the hope of gaining access to females.

Here’s the first invertebrate I saw after landing in Vanutatu: 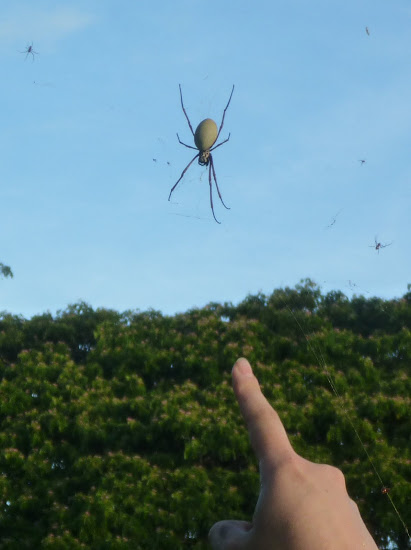 You’d have to try very hard to miss these massive orb web spiders, in the fifteen minute drive from the airport to house at which we stayed I spotted five or six. In town, they tend to set up their webs on power lines and between houses. I gather they are Nephila plumipes, one of the golden silk orb weavers. Unfortunately, becuase they weave their webs at such great heights and I couldn’t get close enough to them, these photos don’t really show how massive these spiders are. 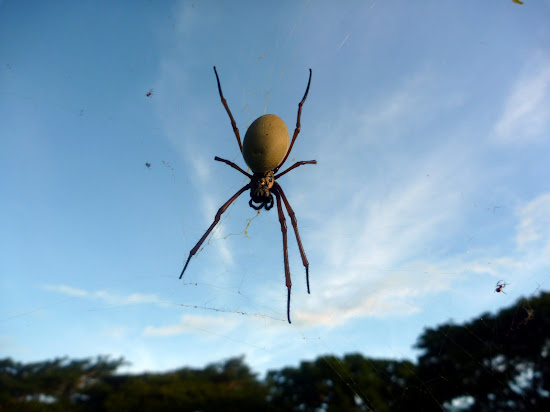 Female Nephilla are the largest of the web building spiders, their bodies alone are about 50 mm long and their webs span 2 metres. If you look closley at the photos above you’ll see some much smaller spiders in the same web as the massive one. The smaller spiders could very well be ‘kleoptoparasites’, species that live within the webs of larger spiders and steal their host’s prey. But, it’s also quite possible some of the smaller spiders are males of N. plumipes, eyeing up the much larger female as a potential mate.

It seems the evolutionary process that made Nephilla females so large left the males of the genus behind. In fact, small males are probably less likely to mistaken for food by the large females, so it’s even possible that males of these species got smaller at the same time as the females grew. Whatever the reason, Nephilla males are often ten times smaller than their mates. This is the bit where I would have tried to explain some of the mechanics of spider sex, but, rather wonderfully, Isabella Rosellini, has already done that:

Thanks to Alex Wild for finding that video, his post presenting includes a great photo of the difference between a male and a female Nephilla.

I think there’s room for one more spider from Vanuatu as the last of terrestrial invertebrates from my trip. An unidentified orb weaver in the sun at the Mele Cascades waterfall: 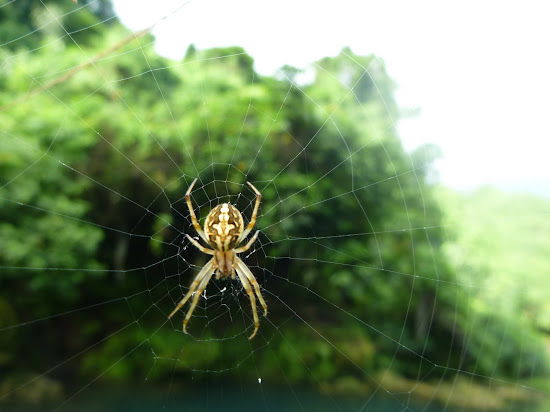 0 Responses to “Sunday Spinelessness – The rest of Vanuatu”