Today marks the end of the Daylight Savings Time in New Zealand, so local readers will have had an extra hour at their disposal to sleep through, get more work done, or explain to their children that they are meant to stay asleep for longer today. However you used that extra hour, you should take a moment to think of the extraordinary amateur entomologist that came up with the idea that gave it to you.

George Vernon Hudson was one of New Zealand’s first and finest entomologists. He described hundreds of our insect species and worked out the lifecycles of still more by raring their larvae at his house in Karori, Wellington. Hudson was a not a professional entomologist – he had a day job as a shift worker at the Wellington Post Office. Working shifts gave Hudson a chance to get out and collect insects while others were working, and it also made him aware just how much daylight people were sleeping through during the summer. In 1895 Hudson read a paper to the Wellington Philosophical Society (part of what became the Royal Society of New Zealand) in which he advocated putting clocks forward in October so sunrise wouldn’t happen hours before anyone woke up and the pushed-back sunset would mean “a long period of daylight leisure would be made available in the evening for cricket, gardening, cycling, or any other outdoor pursuit desired”.

By all accounts Hudson’s proposal wasn’t well received. The paper itself wasn’t printed (the quote above is from a follow-up he presented in 1898), but reactions to it were reported in the society’s journal. William Maskell, the president of the society and a fellow entomologist, was particularly scathing (and inaccurate) when he said ” the mere calling the hours different would not make any difference in the time. It was out of the question to think of altering a system that had been in use for thousands of years, and found by experience to be the best.” Apparently, Hudson wasn’t deterred by the bad reaction his paper got, and he kept pressing the idea. By 1898 he claimed the support from many people, particularly in Christchurch, but in the end, it all came to nothing. Daylight Saving Time as we know it was really the result of an English builder called William Willet, who came up with the idea independently and managed to get his plan considered by parliament. But the turning of the clocks, and GV Hudson’s role in coming up with the idea, are the perfect excuse to show off one of my favourite possessions : 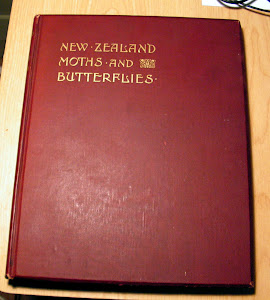 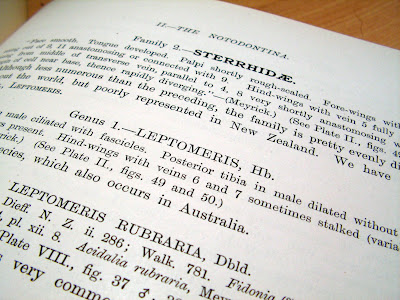 I have a copy of Hudson’s first major scientific book, New Zealand Moths and Butterflies (1898). My copy used to belong to the Wellington Acclimatisation Society. It came to me by a circuitous route, but it seems the book spent at least some of the last hundred years sitting in a shed. It’s largely a taxonomic work, full of anatomical details and the curious codes by which taxonomists speak to each other. That much is interesting to a specialist (and I really should donate the book to a research library), but the real stand-out feature is the 13 colour plates, each one full of Hudson’s beautiful hand-drawn illustrations 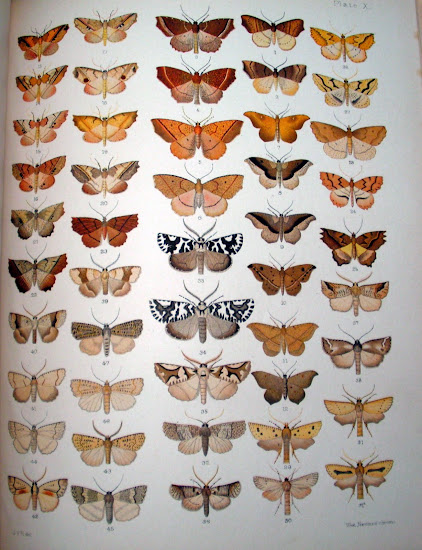 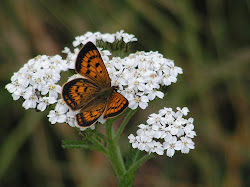 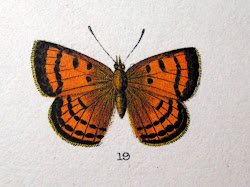 The common copper as drawn by Hudson (Chrsophanus salustius to him) and the same insect at Sinclair Wetlands last year (it’s called Lycaena salustius today).

On top of these wonderful illustrations, there are two letters tucked away inside the book, each written to the Acclimatisation Society by Hudson. They are probably not of outstanding historical interest, but they do tell us something about life as an amateur naturalist at the turn of the 20th Century, so I’m going to reproduce them here. In the first, written in 1898, Hudson writes to follow up a conversation he’d had with the members of the Acclimatisation Society about a truly hair-brained scheme to introduce English mayflies to New Zealand to feed the trout they’d already brought over 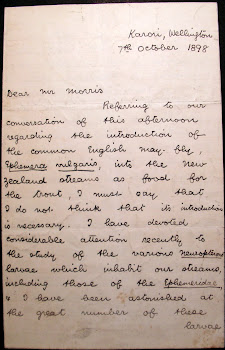 Referring to our conversation of this afternoon regarding the introduction of the common English may-fly Ephemera vulgaris, into the New Zealand streams as food for the trout, I must say that I do not think its introduction is necessary. I have devoted considerable attention recently to the study of the various neropterous larvae which inhabit the streams including those of the Ephemeridae and I have been astonished at the great number of these larvae.

Apart from the fact that our native Ephimerae would appear to be amply sufficient for the requirements of the troutc etc, I should mention that the larvae of these insets are extremely difficult to keep in captivity and I thnk that it would be almost impossible to introduce themfrom England, except perhaps by the egg state … I think therefore that any attempt to introduce th English may-fly into this country should certainly be discouraged

Four years later, Hudson had written a new book on the New Zealand Neuroptera (a taxonomic group that included mayflies and dragonflies at the time). Being an amateur, Hudson’s work was funded from his salary at the Post Office and whatever money his books might make. So, he decided to try and cash-in on the advice he’d given the Acclimatisation Society:

I enclose herewith a specimen plate and some prospectives (?) of my new book on the New Zealand Neuroptera. If you could mention the book and exhibit the plate at the meeting of the Acclimatisation Society on Thursday next I should be very much obliged. The new secutary also has a copy of the plate. During Mr Morris’s time I was asked by the Society to report as to the necessity and best means of importing the British may-flies into New Zealand and in reply I said that such an importation would in my opinion be quite unnecessary … my recommendation probably saved the Society a considerable sum of money… I think I have some claim on the Society and its members for a liberal support of my book.

I don’t know what happended to his Neuroptera plates, but, evidently someone like Hudson’s work enough (or felt sufficiently grateful for his help) to buy his butterfly book.
According to Rebecca Priestly’s short biography, Hudson wasn’t a fan of professional science. When New Zealand’s DSIR was set up, he declined the chance to join, and he even intended to donate his collection to a British museum rather than one overseen by government scientists in New Zealand. Thankfully JT Salmon convinced Hudson to give his collection to the Dominion Museum, and today its housed at Te Papa. Old insect collections are immensely valuable tools for research. When I was studying GIANT springtails we went back to old collections (including Salmon’s, but not Hudson’s) to find out how widespread these species were before human-impacts like logging broke up their habitat. Hudson’s collections are really valuable for this sort of research because he was collecting in Wellington while there will still decent patches of native bush around that city. Comparing modern collections to Hudson’s helps entomologists see how habitat changes have affected native species. Hudson’s work lives on in another important way, his grandson George Gibbs took up the study of insects will have passed on his passion for the subject to many of his students at Victoria University

So, New Zealanders: enjoy your extra hour. Those readers tuning in to this post from the Northern Hemisphere: remember to honour that fact that daylight savings was first proposed by someone that wanted to spend the extra daylight ito get out and find some bugs!