Did you know that I’m in the pocket of big bussiness ? Or that I set out to bamboozle people with fancy graphs? Or that I show the typical arrogance of the modern scientist? Well, it was news to me as well, but all this, and much more, appeared in the comments underneath my article on Ken Ring’s (non)ability to predict earthquakes when it was picked up by the National Business Review. One of my crtics did a little research about me and decided that… well I’m not sure what he decided:

I’ve had plenty of support, both public and private, in funding my research and I’m very grateful for it, but I’m not sure propping up a right-wing newspaper would be a very good way to expand spending on basic research. As it happens, I have never studied snail trails (although there’s plenty of science in that mucous), but I’ve looked into something I’m sure my anonymous critic would be equally dismissive of.

I want to know what my snails eat. That might seem like an easy question to answer, couldn’t I just set up in the field with a notebook and write down what I see? Not really, land snails are generally only active for a small proportion of the day, and even if you can observe them feeding it’s hard to tell what they’re eating. The lettuce-destroying slugs and snails we are familiar with are the odd ones out in the malacolgical world – most land snails don’t eat live plants, instead, they prefer decaying matter or algae and fungi growing on various surfaces (some others are carnivores). So, to try and learn something about the diet of my land snails I broke out a scalpel and started collecting the gut contents from my preserved specimens and picking through them to see what they’ve been eating (and if there are differences between species).

I’ll talk about those results one day, but while I was doing those dissections I started finding and more of the leaf veined slugs I’ve written about before. Including babies: 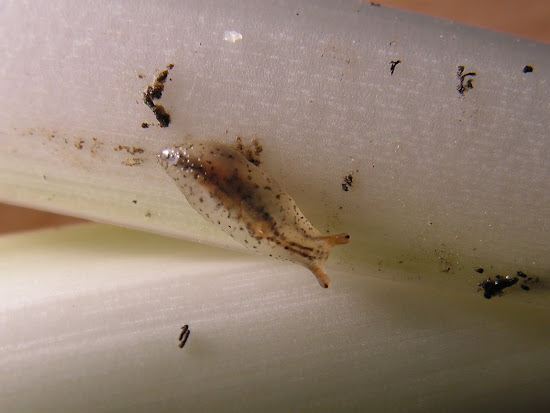 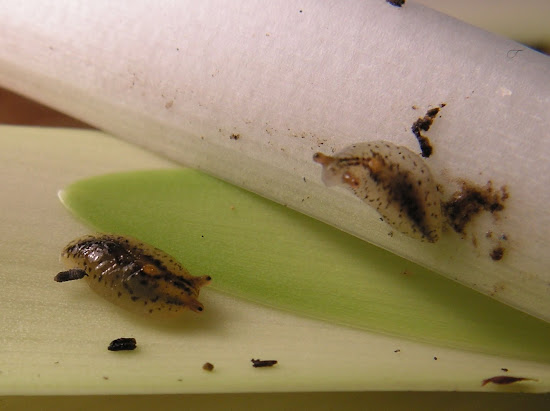 Which made me think: what are these guys eating? As ever, I turned to google for an answer and Te Ara had it “their biology is poorly known, but they are thought to live mainly on algae and fungi on the surface of plants”. Sure enough, searching through the literature on the 30 or so species of leaf veined slug in New Zealand, there is no indication of what it is that they eat. That was too depressing for me, we know so little about the biology of our native invertebrates, but this species (Athoracophorus bitentaculatus) isn’t particularily rare, we should at least know what this one eats.

Don’t worry, I didn’t start sacrificing cute little slug-lets in the name of science. There’s another way to get gut contents (note also, that even flattened slugs have the strangely twisted anatomy of the snails from which they descended): 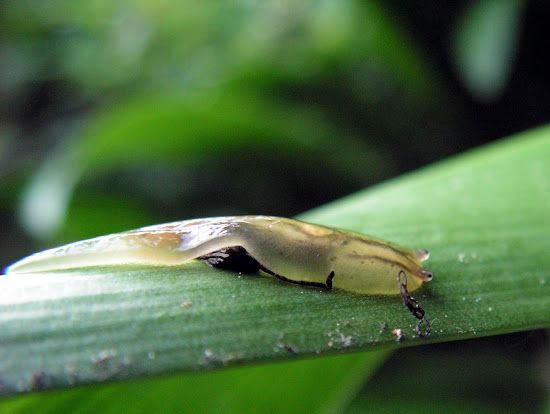 So, I took to stepping outside an night time, finding a couple of slugs, and placing them in a bucket. In the morning I’d move them back to the shrubs from which they’d been plucked and scoop a few fecal samples out of the bucket to inspect along with my dissections. And here’s what I found when I looked down the microscope: And a little closer: It’s took me a pretty long time to work out what these three-lobed structures were, but I’m pretty sure I know now. They’re pollen grains. You can tell a lot about the world from studying pollen grains, each year plants put out millions of these structures, each once identifiable to a taxonomic group. To a trained eye, a series of pollen samples from a old lake bed can reveal past climate change or the evolutionary history of our country. Pollen can even solve crimes. To my eyes… well, I think these are from the massive pine tree next door ( the smaller lobes are “bladders” designed to catch the wind and let the pollen fly, and are unique to pines and their relatives).

It’s not actually clear that the slugs were going out of their way eat pollen, it might just have been on the surface they were eating from and unavoidable. It’s certainly clear that a lot of grains made it through the digestive system intact. So I still hadn’t really cracked the mystery of what these guys were eating. Then, a couple of weeks ago I noticed something. The railing along the pathway the leads down to our front door is covered in algae and fungi, with a very distinctive pattern: 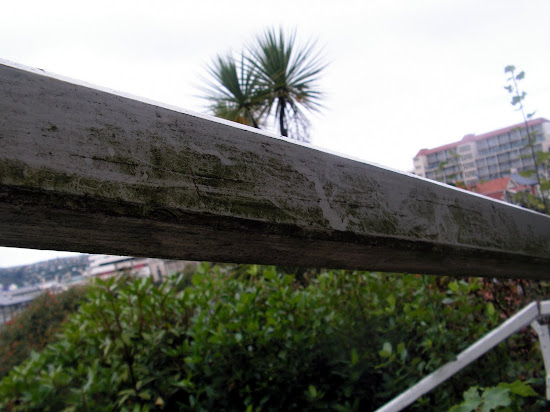 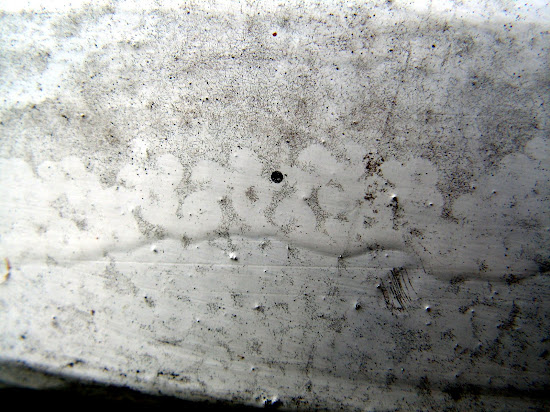 These are slug feeding trails. As they slide across a surface, slugs and snails use an organ called the radula to rasp away and remove the food. I must have walked past this evidence a thousand times without ever thinking about it! The next night I went out with my deeply amateur night-shoot gear and, sure enough, there the slugs were: 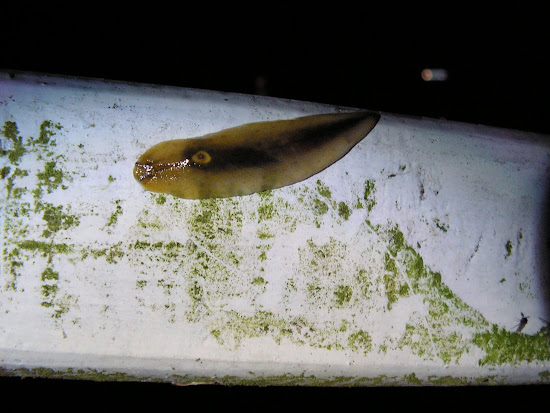 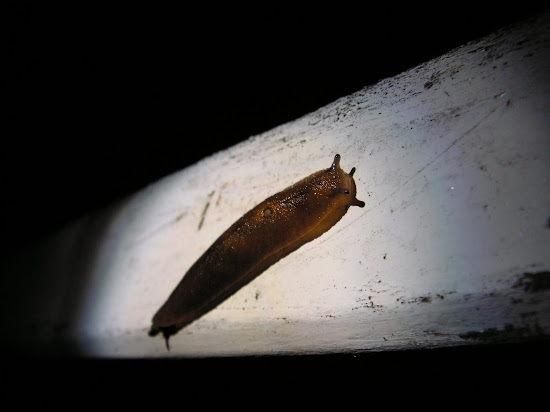 So, now we know, leaf veined slugs do indeed live on algae and fungi (and possibly pollen too) but not only on the surface of plants!

I don’t know how I managed to write this post without checking for similar posts at Snail’s Tale’s by Aydin Ã–rstan, the blogosphere’s preeminent malacologist (I’m sure there’s a trophy for that). Remarkably, Aydin has found pine pollen in fecal samples from slugs, and has found feeding tracks left by the same species! Perhaps his Arion and my Athoracophorus fill the same niche on opposite sides of the world.

Hello boingboing readers! If you want to find some more backyard science, I’ve also been keeping an eye on a little colony of spiders (1,2,3) and I once tried to find out what makes bumblebee workers get working. If you’re a fan of spineless creatures in general, you should check circus of the spineless which collects posts from all over the web (and all over the world). The last edition was hosted by Zen Faulkes at Neurodojo and you can find the older ones here.