I seem to have run out of week. I had a great idea for a Sunday post this week, but I’m not going to have time to write that one. Instead, here’s a recent discovery from the backyard. 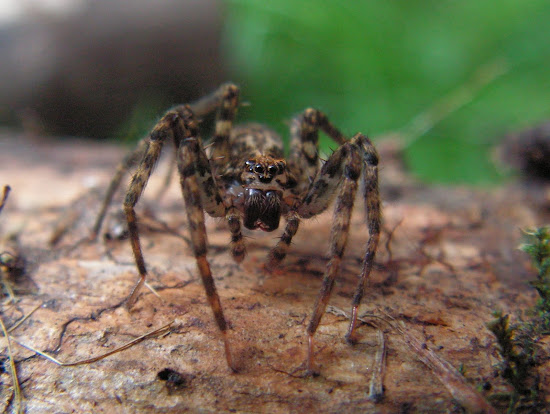 Recognise the eyes? This must be a male of the same Cycloctenid (scuttling spider) species I uncovered a couple of weeks ago. He’s a good deal smaller, and a good deal slimmer than his female counterpart: 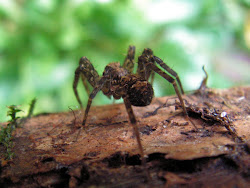 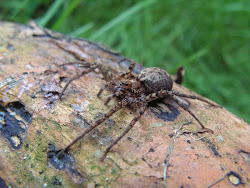 If I knew I was going to compare the male and the female I would have tried to get a better comparison shot… male on the left, female on the right

Whenever you see males and females of the same species that look conspicuously different from each other you know that each sex is subjected to different evolutionary pressures. In mammals, if there is a difference in size, males are usually the larger sex. That disparity arises because males fight with each other for access to females and big males do better than small.

In invertebrates (and fish, for what it’s worth), the tables are usually turned, with females being larger than males. This pattern probably arises from the different costs that each sex has to bear in creating the next generation – eggs are expensive and sperms are cheap. That bias might be amplified in ‘sit and wait’ predators like these Cycloctenid spiders. Fritz Vollrath and Geoff A. Parker looked across a host of spider species and found those with relatively sedentary females tend to have smaller males, then set about trying to build a model to understand how that size difference might evolve. It turns out, if females are few and far between then the success of males has more to with the time they spend searching for females than their ability to fight off other males. So, the best bet for a male Cycloctenid that wants to leave descendants might be early maturation, even if the extra searching time that results from it comes at the cost of extra growth.

This male’s search seems to be over. I found him about 5 metres from the log that the female in this first post was living under and she hasn’t moved since.