You can tell from the increasingly brief nature of these posts, that I have quite a lot on at the moment. Between trying to polish off these thesis chapters, finish edits to paper I contributed a little bit do and teaching my very first lecture last week I’ve been a little busy. I do have time to share a couple of photos I took to record the visit of queen bumblebee.

It’s really not bumblebee season in Dunedin, so I was quite surprised to hear that familiar baritone buzz in my kitchen a couple of weeks ago. In temperate climates like Dunedin’s, bumblebee nests survive the winter by putting all their investment into a few queens who mate at the tail end of summer then hibernate in some warm-looking spot (often a disused rat’s nest), biding their time so they can establish a new nest in the spring. I don’t know if the bee that made it to my kitchen had been fooled by a couple of warm days, or if it was a straggler from a nest that had tried to make it through the autumn (in Northern New Zealand bumbleebee colonies can find enough flowers to eek out an existence over the winter, but I can’t see that working down here), by the time she got to me she wasn’t doing very well (note the splayed, face down posture) 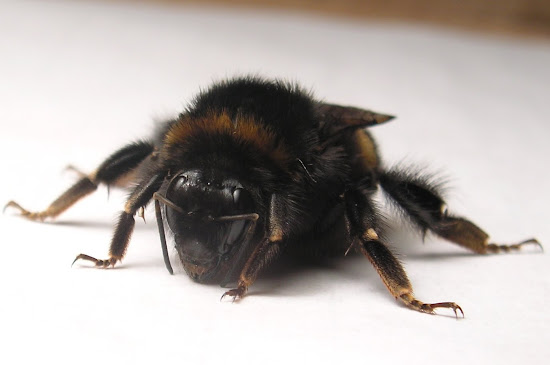 The buzzing I’d heard wasn’t so much the bee flying about searching for a way out as her attempts to build enough temperature in her flight muscles to let her take off. The muscles themselves need to be around 30 °C before they can work, but bumblebees can operate when the outside temperature is as low as 6°C by uncoupling their flight muscles from their wings and vibrating them. As David Attenborough explains, bumblebees are warmblooded insects!

My visiting queen didn’t appear to be winning her battle with the thermoregulation, so I scooped her and but her under a desk lamp in the hope it would help. The fact I might be able to take photos of her at the same time was, of course, just a happy side effect of trying to help her out. I really failed to take any interesting photos, but I do quite like this detail of the hairy abdomen and veined wings: 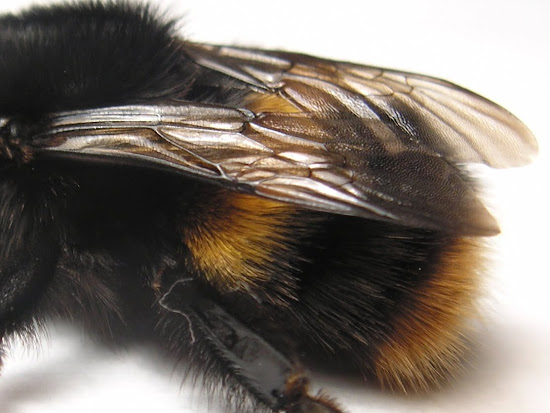 I hoped focusing on the tail-end of the bumblebee might reveal the fact that bees (and their relatives the wasps and the ants) have two pairs of wings (which is the ancestral state for insects). But, in fact, the smaller set of wings are so tightly connecting with the larger ones it’s impossible to see here. You’ll have to look at some disembodied wings to see that I’m not making it all up.

You’ll be glad to know a couple of minutes under the lamp, and her concerted efforts, were enough get the queen back in the air – she was last seen flying upwards and hopefully towards a good spot avoid the snow that fell here recently.

0 Responses to “Sunday Spinelessness – A visit form a queen”