No time to say anything meaningful today, so here’s a pretty picture of a green chiton (Chiton glaucus) 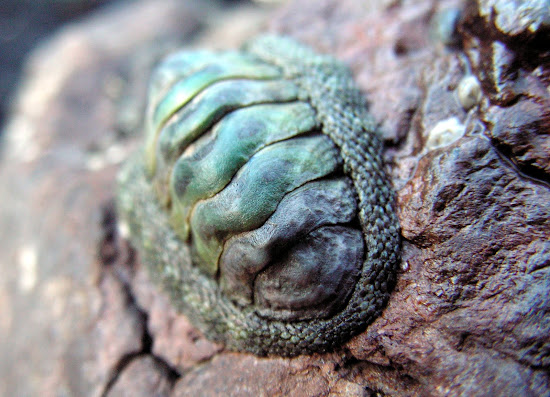 Of course, I wouldn’t be a self-respecting invertebrate evangelist if I didn’t try an convince you that chitons represent more than a pretty shell and a stern test for junior rock-pool hunters’ ability to prize creatures from rocks. Apart from all that armour, the most interesting think about chitons is their teeth. Like most molluscs they feed with a rasp like organ called the radula, unlike most other molluscs their radulae are coated in an iron-containing mineral called magnetite. As the name suggests, magnetite is a mineral that can become magnetised (in fact, of all naturally occurring minerals its the most  magnetisable) but that’s not why chitons make cover their teeth in it. In order to eat, chitons need incredibly abrasive teeth that can scour away at rocks and expose algae, and that means the teeth need to be coated in a tough material.

“Normal”, geologically produced magnetite is pretty tough, but, remarkably, the magnetitie that chitons produce to coat their teeth is much tougher despite being made from the same molecules. The chiton’s biochemical toolkit is able to produce magnetite in which the three dimensional structure is tweaked towards a tougher end result.  Professor Kate McGrath from the MacDiarmid Institute spoke about this ‘biomineralisation’ process as part of her contribution to the Royal Society’s Marie Curie Lecture Series. Her research doesn’t aim to mimic the specific ways in which organisms create chemicals, so much as learn the various tricks that evolution has discovered and see how they might be applied to either tweak or completely chain the way we make useful minerals on industrial scales.

0 Responses to “Sunday Spinelessness – How chitons are tougher than stone”