I’m sure that later this evening we’ll be treated to one of the staples of election night coverage, results from early returns delivered with the qualifier that they are unlikely to represent a reliable estimate of the final result.

Part of that reason for that qualifier is the obvious point that any small sample only provides an uncertain estimate what’s going on in the population large. That sampling error can be compounded if there is some bias that makes the early-returning booths pull further left or right than the population at large. In New Zealand at least, you’ll often here people say the small polling booths that quickly count and report their results are predominantly from rural areas and, so, favor right wing parties compared with larger, urban booths. (The meme that passes among some right-wing folks, that Labour only won the 2005 election because of  South Auckland voters is an example of this narrative).

So, I thought I’d see if there was any evidence for that these stories are right. It’s easy to get the data from each of the 6 000 or so polling booths used in the 2008 election and munge it together to see if there is a relationship between how red or blue a booth was and how many people voted there (which is a pretty good proxy for how quickly the results will be reported): 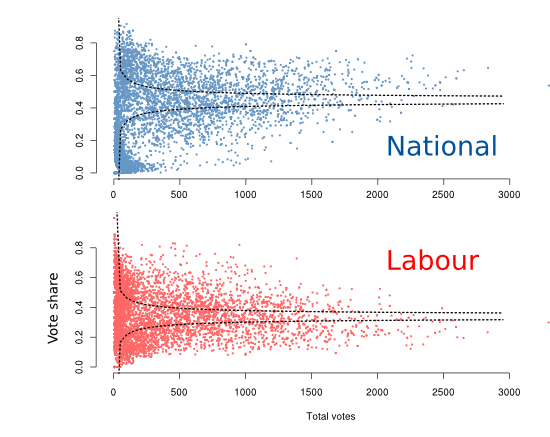 If polling booths were unbiased samples of the electorate (they really aren’t…), we’d expect all 99% of the dots in these graphs to fall between those dashed lines.

As you can see, at least in 2008, the common wisdom appears to be wrong: the larger polling booths went more toward National and less toward Labour than the rest of the country.
Tonight’s early results will certainly only be an indicator of where things will end up, but things won’t necessary get better for left-leaning parties as the night goes on.

UPDATE Thanks for a comment from Luis Apiolaza, who suggests a better way of getting the question. These plots show the percent favouring each major party after each polling booth’s data is added in order of how many votes were recorded. As you can see, it takes a long time for Natinoal’s vote to approach its final number. I wonder if this is in part be an artifact of many small booths in Maori electorates? Of course, polling booths won’t necessarily report in order of how many votes were cast in them.