These Sunday posts are about celebrating the spineless multitude – that under-appreciated majority of animal-life that makes it way around the world without the aid of a backbone. We usualy call thsoe creatures “invertebrates”, but that name doesn’t apply to an actual taxonomic group. These days, taxonomists generally classify organisms based on their shared evolutionary history. So although having a backbone might been the most obvious factor that groups the species in the sub-phylum Vertebrata together, the reason we place fishes, reptiles, amphibians birds and mammals together is the fact they as a group, they are more closely related to each other than any other animals. In fact, the presence of vertebrae in all these groups is one of the reasons we know they are related to each other – since it’s much more likely that the modern species each inherited their backbones from a common ancestor than each coming up with the idea on their own. The “invertebrates” are simply all the animal species that don’t fall into the group Veterbrata, by they are not a natural group because some of them (like sea-squirts) are much more closely related to vertebrates that other inverts.

Using the evolutionary history of species as a way to classify them leads to some slightly ill-fitting names. The mammalian order Carnivora includes the Panda (an animal that very rarely eats anything other than bamboo) and snakes are still tetrapods even if that name means “four-footed”. As far as I know, there is only one species of vertebrate that lacks a backbone and might therefor sneak in to these posts, the New Zealand endemic Cacaopiscus althaea “or chocolate fish”: 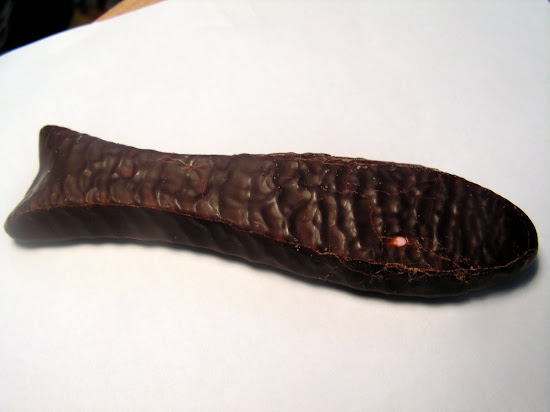 Ok. So the entire post up until this point was a setup for a terrible ‘joke’ (and an excuse to shoehorn some “news” into the Sunday post). For those reading from outside New Zealand, a chocolate fish is a marshmallow (Athaea) filled, chocolate (cacao) covered fish (piscus) shaped confectionery, which has somehow become the standard currency for a small job well done. In that spirit, the doctoral office here at Otago gives everyone that actually makes it to the end of the small task of writing and submitting their PhD thesis a chocolate fish. This is my chocolate fish.

I’d write about my thoughts about the PhD process, the struggles of writing and the inevitable dramas of printing the thing, but I’m not sure my thoughts have caught up with me yet. I’m mainly in the “wandering around the house unsure what to do with myself stage” for now. So if you’ll excuse me, I’ll get back to that.

One Response to “Sunday Spinelessness – A rare case of secondary spinelessness”