As I said last week, I’ve just returned from a bit of a summer holiday. I’m not the sort of person who can do absolutely nothing for any length of time, so I tend to find my relaxation in doing things that I wouldn’t have a chance to if I was at home.Like riding a mountain bike. As far as I’m concerned, the best place in Dunedin is  the top of Sandymount, an eroded volcanic cone that marks the start of the descent from Highcliff down to Portobello when you ride the Otago peninsular*. I could get all lyrical about the feeling of being away from the rest of the world, or the joy of the moment that you roll from the stiff climb into the fast and flowing descent, but thankfully Brian Tuner has already written a poem about my favourite bike ride:

…
I push the gear
down a little and the chain
drops onto a small sprocket
and the wheels start to spin
faster, and the air’s
like a quick tongue
in my hair as I descend
swinging in wide
curves
around the hill…

Training on the Peninsular

When I spend time at my parent’s house in the Wairarapa I leave my road bike behind and borrow my dad’s old mountain bike to explore some slower, bumpier rides. That’s how I ended up, in the middle of a mid-summer day, struggling my way up a crushed limestone path in a small reserve in Masterton. Bike riding is one of the past times that had to give way when my thesis ate all my spare time, so this really was a struggle. Even riding in the lowest gear I could, I soon gave up on the nice “upright” form that helps a rider spin their way up a hill and instead grovelled my way up, shoulders slumped and head down. And that was a good thing, because with my eyes pointing down I spotted a small creature, seeming to hover just above the ground as it zoomed out across the path, .The creature stopped, turned a few degrees, sprinted down the path a little and stopped again. So I stopped, not, of course, because I needed a break from the hill, but because I’ve read Ted MacRae’s blog long enough to recognise the behaviour playing out in front of me.

If you like bugs and you don’t read Ted’s blog (Beetle’s in the Bush) then you really ought to fix that oversight. He’s a great photographer and an immensely knowledgeable entomologist, but the thing that really  springs from Ted’s posts is a love for natural history. Tiger beetles are one of the bits of natural history that Ted loves the most, and its through his photos and posts that I’ve been introduced to these wonderfully rapacious critters. Tiger beetles live almost everywhere on earth. New Zealand plays hosts to a small radiation (12 species, all arising in the last 10 million years, Pons et al. 2011, doi: 10.1016/j.ympev.2011.02.013s) and, although they aren’t particularly rare, I’d never seen one before this day. So I scooted a little closer, and the beetle (raised up from the ground by slender legs, and not actually hovering above it) sprinted a little further. And so it went: scoot. sprint. scoot, sprint, until I got within a metre or so and the beetle added “fly” to its repertoire and disappeared into the long grass.

I was happy just to have at last seen one of our tigers, but I wanted to get a little closer and even see if I could grab a photo of the skittish creature. So that evening I drove out to the reserve and walked along the paths at the top of the hill, hoping to see another beetle zoom into view. A couple of laps of those tracks yielded nothing. If you want to see something interesting the best bet is stop and let the world happen around for you for a little bit, so I stopped. Before long I was watching native (Lasioglossum) bees investigating nesting sites on the ground and then, out of the corner of me eye: Sprint. Stop. Sprint. 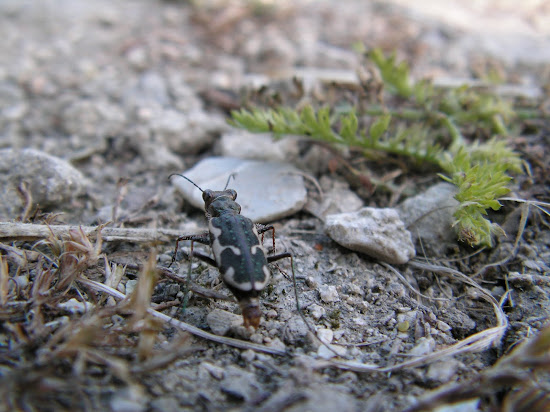 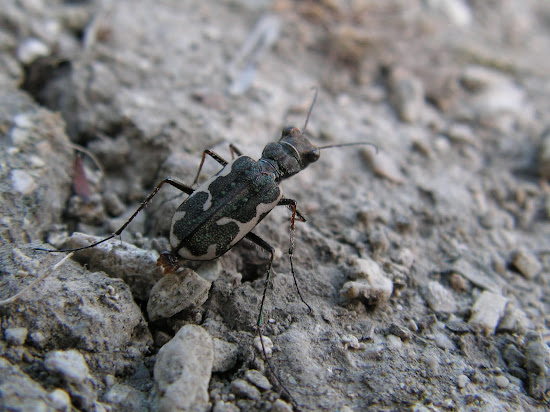 Neocicindela tuberculata is the most widespread of our tiger beetles, and an ecological generalist that copes with disturbed habitats as well as beaches, riverbanks and forests. Like tiger beetles everywhere, they are predators that use their bursts of speed to hunt down smaller insects. The harsh light, the beetle’s shininess and my lack of photographic skills didn’t combine all that favourably, but I did get a few headshots that let you get an idea of what happens to a prey item once a tiger beetle has caught it: 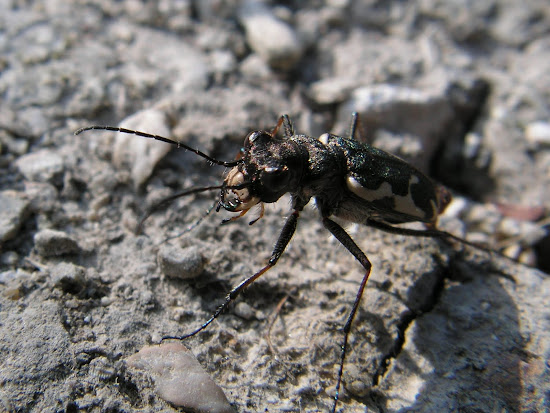 I’m not sure, but I think the protuberance you can see in these photos may be an ovipositor – an organ used for laying eggs. These beetles lays their eggs in burrows, and the larvae that develop in them are every bit as fearsome looking as the elders. Since it seemed like this beetle might in the process of keeping this population going, I decided I should let her get on her way while I could be satisfied with a beetle I’d long wanted to see marked off my “life list“. The only problem with being a invertebrate fancier is that makes it another one down, approximately 10 million to go!

* At least it is if you don’t find yourself stuck behind a camper van trundling down the skinny road at 20 kph!