If I asked you to think of a bee I’m willing to bet you’d come up a with picture of a honey bee: a fuzzy little creature with yellow and black stripes and a rear end that can deal damage. Perhaps you’d think of a big fat bumblebee making its way between garden flowers, or, if you are lucky enough to live near them, some commercially important pollinator like a mason bee. Even if we including those extra forms in the way we think about bees, we are only taking a tiny sampling of the twenty thousand species that make the superfamily Apoidaea.

There are giant sex-crazed killer-bees, and tiny bees that specialise in gathering nectar from the false-flowers of Euphorbia. Bees that form colonies with thousands of adults, and bees that keep to themselves. There are hairy bees, and hairless bees, bees that specialise in stealing honey from other bees and bees that develop “soldiers” who give their lives to fight these would-be thieves off. There are even bees that eat meat. Given the huge number of ways there are to be a bee, you might ask what unites this group. Bees (like ants) are specialised wasps. They all descend from a group of wasps that gave up a typical waspish lifestyle, providing insect or spider flesh for their young while using nectar to fuel their activities as adults, and instead started provisioning their larvae with nectar and pollen. From so simple a switch the seemingly endless forms of bee have arisen.

It might come as a surprise to New Zealanders that we have native bees. Our natives aren’t hugely important pollinators of commercial crops, in fact, long-tongued bumblebees were introduced for just this reason. Though our bees pollinate plenty of native plants, they don’t play as large role in plant reproduction as their relatives in some eco-systems – birds, beetles, butterflies, lizards true files and bats are all important pollinators in New Zealand natural habitats (and introduced rats have partly replaced declining bats in this role). But the 30 or so native bee species that we know about (there could well be more) are still part of our natural heritage, and what’s more, they are a part that goes unnoticed under many of our noses – as a few species can do quite well in suburbia. The locals come in two of the nine recognised bee families , so let’s treat each seperately.

The colledtids are called “plasterer bees” because they smooth-off the walls of their nests with a secretion that create with their mouths. In New Zealand we have 18 large-ish (up to 12mm) species in Leioproctus and another 9 or so Hylaeus species. The spur for me writting this post was encountering a member of the South Island species Le. fulvescens sitting in our hallway last weekend (duly photographed and moved off to the garden).

Le. fulvescens is the only native bee that fufills the yellow black and fuzzy sterotype for bees. The others are black and relatively hairless. Bees often specialise on collecting pollen and nectar from a particular group of flowers, and most New Zealand colledtids search for flowers from the Myrtle family (e.g. rÄtÄ, pÅhutukawa, mÄnuka and kÄnuka). I’ve never stopped to watch them, but I gather that native bees can outnumber introduced ones on these flowers at the right time of the year. A few other colledtids, including Le. fulvescens, prefer flowers (native and introduced) from the family Asteraceae (daisies, sunflowers and their kin). I’d like to think the the one photographed above had been brought into our garden by the display the federation daises are putting on – but the hawkbit taking over the less acessable regions of the section is a probably a more likely source.

These bees all produce nests in the soil, and when the conditions are right females can lay an egg and provision a nest with nectar at the rate of one per day. The clay bank that our house sits under is full of little drilled holes, which I’m sure mark the start of Leioproctus nests. They’re most abundant towards the start of summer (November-December) but they’ll hang around until February when the last generation of females will find somewhere to hide over the winter.

The halicids get their scientific and their common name from the fact they are attracted to the salt in human sweat. This family is represented in New Zealand by 4 or 5 species of Lasioglossum, with one, La. sordum common in disturbed habitats. I’ve only ever seen one of these bees moving about between flowers, but must have scooped hundreds of them out of the my parent’s swimming pool in the Wairarapa. I don’t know if the chlorine salts that balance the pool’s chemistry set them off, if they’re thirsty or if the polarised blue light that shines off the water plays tricks with their eyes, but something about the pool leads to a fatal attraction.

Scooping these guys out of the pool let’s you learn a little about them, first, the males are substantially smaller and thinner waisted than the females and second, the females are capable of delivering a very small sting. Steven O. Schmidt, an entomologist who has evidently been stung by most of the venomous insects in the world , has created an index to measure the power of an insects sting. The sweat bee scores lowest on the Schmidt Pain Index – a 1.0 with the desctiption “Light, ephemeral, almost fruity. A tiny spark has singed a single hair on your arm”. Certainly nothing compared with the pain of the tarantula hawk (relatives of the spider-hunting wasp featured here), which weighs in at 4.0 and is “blinding, fierce, shockingly electric…”. Lasioglossum seem’s to live up to its famaly’s reputation – it took me a little while to convince myself that I had just been stung (by a creature who’s life I was trying to save no less!) and it does feel a little bit like a spark fading out on your skin.

The time it takes for a water-logged bee to get back to being airworthy also gave me a chance to take a few photos – you can tell these are staged because this is exactly the sort of flower (requiring a long tongue to get the sweet reward) that a native bee would never visit! 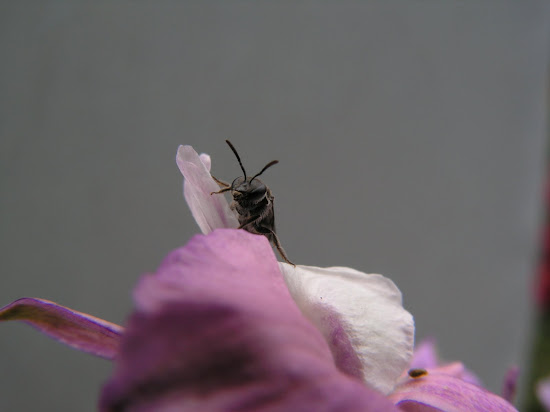 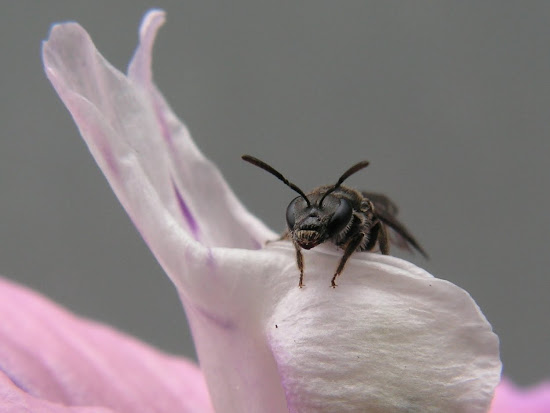 In terms of their habits, our native halicids are much less fussy than the colledtids – they’ve been recorded from at least 80 species of plants across many families. This undemanding approach to life might be a result of their longer lifecycle – females start emerging as soon as August, the first males appear around November and both sexes will persist until frosts send them into dormancy (I don’t know of any records from Northland, but bumblebees can keep year-round colonies up there, and these bees could conceivable survive the winter their too. Lasioglossum are described as solitary, but, although they don’t form huge colonies, there is evidence that female La. sordum will share nest entrances. Such behaviour is probably one part of a continuum that goes from solitary behavior, through to shared provisioning of nests and on to super-colonies like those of honey bees (and some sting-less bees). Both the behaviour (provisioning of nests with honey, a food that can be stored) and the genetics (a form of sex determination that means sisters are effectively more closely related to each other than they are to their mothers) of bees open the door to evolution of “true social” behaviour, and the steps along the way provide scientists with rich ground to test their ideas about this evolutionary phenomenon.

That’s it really. Next time you’re see some bare soil in a nice flowery habitat, why don’t you look and see if you can find some perfectly cyclindrical holes (and piles of soil beside). Or better yet, spend a little time in the garden and see if you can’t spot a native bee making its way from flower to flower.

Check out Te Ara’s article on native bees here, and the source of most of the information above: