I’m giving a big talk next week – a departmental seminar. It’s the first time I’ve had more than 15 minutes to talk about my research, so this talk will be a little more discursive that my usual.

I study speciation, how new species come into being, and one of the things that I want to emphasise is that speciation hasn’t really entered into the broader understanding of what evolution is.Take the one image that describes evolution in modern society: The so called “march of progress” has been used to describe the origin of our species thousands upon thousands of times. But it never happened. Only a few of the species depicted are potential ancestors for humans and many of them were contemporaries to each other (as the original diagram makes clear) so can hardly be different steps along a single evolutionary path.
To try show what really happened, I’ve redrawn “March of Progress” into the “tree of diversification” – trying to show how the species depicted above relate to each other (parts of this tree are very much up for debate, by the way). Bear in mind, I’m only including the species that are represented in the original graphic, if we were to include all the fossil ape species we know about the tree would be much bushier): 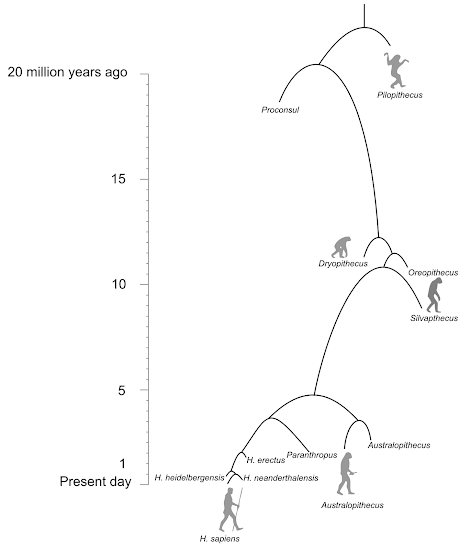 Silhouettes are CC BY-SA by José-Manuel Benitos this image is released under the same license.

I think that when you look at it this way it becomes clear that if we want to understand how the organisms depicted in the most famous icon of evoluton came to be we need to focus not just on how changes occur in one lineage, but on how new lineage form and become capable of changing in their own directions. At the moment there are probably 10 million species on earth, and just how they got to be here is surely one of the biggest questions that biology asks us. Speciation and diversification ought to be central to the way we think about evolution.