If you are a cricket fan you’ll know what sort of weather we’ve had in Dunedin – wet and grey with a chance of denying New Zealand a glorious victory.* The gloomy picture outside the window is made worse for by the fact I’ve spent most of the afternoon sorting through pictures taken for my fieldwork in the Cook Islands. So, between the carefully numbered photographs of the snails that went on to be the basis of my thesis I’m met with scenes from a tropical paradise: 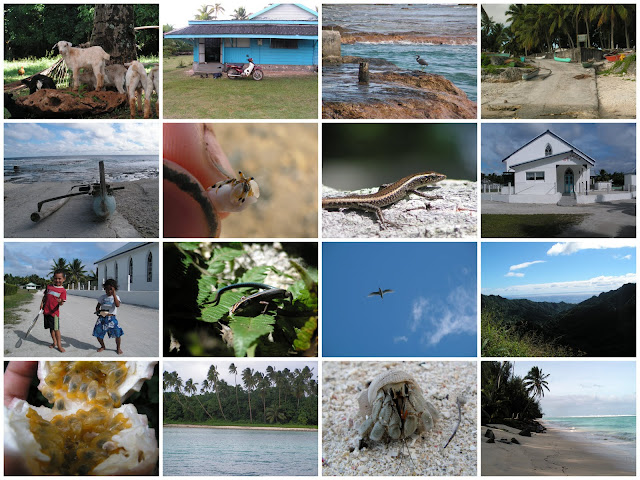 There are also some interesting critters in the “official” photos – like this snail: 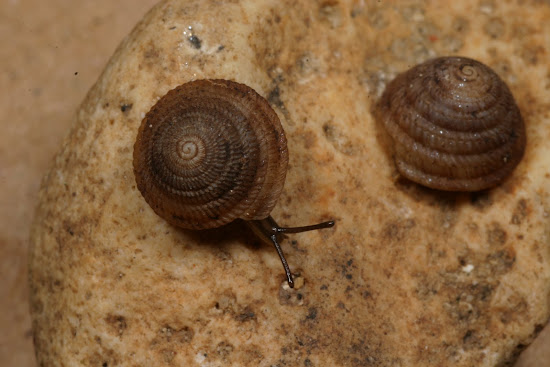 That’s Libera fratercula Pease, 1867 and if you believe that subspecies are a meaningful category you can call in L. fratercula rarotongensis Solem, 1976. The genus Libera is part of one of the most important land snails families in the Pacific – the Endodontidae. These tiny snails (most have shells only a few millimeters across) are found on most islands in Pacific and in some cases underwent very large evolutionary radiations. In fact, there were so many species that Alan Solem seemed to have trouble coming up with names for them in his 1976 monograph . Solem introduced the genera Aaadonta and Zyzzyxdonta (so named because he believed them to be morphological opposites, which should appear at opposite ends of his work) and named one species Baa humbugi (the genus named for a part of Fiji and the species name the result of an “irresistible impulse”).

It’s not really possible to write about Pacific land snail faunas in the present tense – it’s quite likely most of the species Solem described are now extinct as the result of habitat destruction and introduced pests. In the Cooks there were two major radiations, the Sinployea and Minidonta of Rarotonga, both now severaly eroded. The Cook’s Libera are less diverse, but also have an interesting evolutionary history. There are forest-dwelling Libera species in many islands in the SW Pacific, and Rarotonga was no different with one species L. cavernula making its living in the vegetation. Libera fratercula (the handsome species photographed above) appears to be the closest relative of L. cavernula (that is, the two species arose within Rarotonga) but at some stage this lineage gave up on forest and started living on the beach. Specifically,  L. fratercula lives in the piles coral rubble that accumulate on Rarotonga’s beaches, having been broken away from the island’s fringing reef. This is a harsh environment, with changes in temperature, saltiness and moisture occuring all the time – but the switch appears to have worked out for L. fratercula, which still has quite large populations around island whereas L. cavernula is now missing presumed extinct.

Rarotonga has plenty of coral rubble, but the other islands in the Southern Cook Islands are basically made of coral rubble. Mitiaro, Mangia, Atiu and Mauke are all small islands that have already gone through the all the steps of the typical life cycle of a pacific island: a fiery birth as a volcano; subsequent erosion into an ever smaller,  flatter island; treading water as an atoll and finally dipping below the surface for ever. The islands of the Southern Cooks got another shot at life when, about 2 million years ago, fresh volcanic activity lifted the crust on which they sit and thrust the fossilsed remains of their coral reefs above the surface. These so-called makatea islands have no shortage of coral rubble and the Rarotongan L. fratercula populations live in just the right place to be swept out to sea. It seems that, among the thousands of snails that must have died having been washed out to sea, at least a few washed ashore on the makatea islands and took advantage of all that coral.  Libera fratercula has made it to each of these smaller islands and they each have (or at least have had) populations of this species.

There’s on more really cool think about about L. fratercula – but I’ll have to wait until I take a few more photos (sadlt no field work required) to talk about that one. Here’s a close up for the mean time: 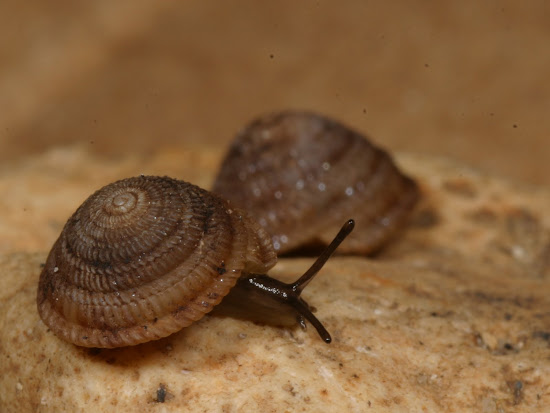