Next week’s post is going to be really good, but it’s also going to be next week. Here’s a little taster of a post I didn’t leave myself a enough time to write today – a close-up of of the shell of native (Allodicsus sp.) land snail: 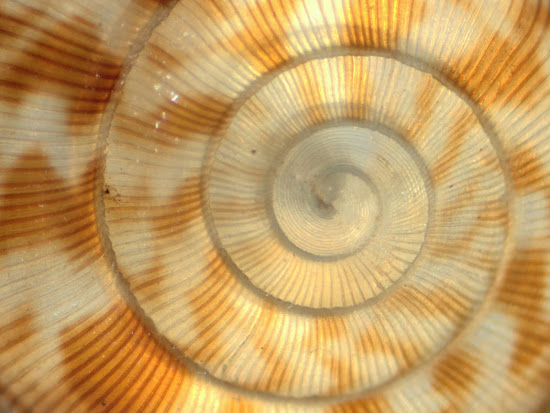 A snail’s shell is a complete record of that shell’s growth. If you look closely at this photo, you can see that the raised pattern on the shell (the “sculpture”) changes. The inner-most coils have “spirals” that run in the same direction as the growth of the shell, while the outer shells have “ribs” that run across it. The point at which this pattern changes marks the end of the snails embryonic growth (called the protoconch) and the beginning of its juvenile and adult growth (the teleoconch). There isn’t always a change in sculpture at the point the protoconch gives way to teleoconch, but there is usually some sort of demarcation.
The shape, size and sculpture of snail shells is an important character for the taxonomy of snails – this one is about 0.8 mm wide, which, combined with the sparse spiral pattern it bears fits with the desctiption of A. kakano.
Check out Aydin Orstan’s post about the protoconch and a few other useful terms for describing shell shapes.