I though I’d do something a little bit different today. Instead of coming up with anything new to say or show you I’m going to steal from give a shout-out to a few New Zealand organisations that highlight  some of the amazing ways that spineless creatures get on with business of living.

Let’s start with Landcare Research (Manaaki Whenua), the Crown Research Institute that focuses on bioiversity and environmental issues. As you’d expect, Landcare do lots of work on invertebrates an that’s refelected in their public face. Their “What is this bug?” site is a great starting point for anyone trying to put a name to some weird critter that’s crawled out from the garden, and topic pages on some of our most interesting creatures (Onychophora, stick insects and our amazingly diverse moth fauna) make for a nice introduction to these groups.

The Landcare site I really want to pull out for special focus is their recently developed guide to freshwater invertebrates. Freshwater invertebrates are often use as “indicator species”. Because certain groups of stream invertebrates are very susceptible to pollution or changes to a stream’s natural flow, the presence or absence of these groups in particular stretch of water can give us an idea of the health of that water. In order to help community groups or landowner monitor their streams, Landcare has produced some beautiful photographs of stream invertebrates (along with information on how to sample them, and how well each species acts as an indicator). You really should check out the whole site, because some of them are quite beautiful, I’ll just give you a taster here:

The other Crown Research Institute with a special interest in biodiversity is NIWA (the National Institute of Water and Atmosphere, if really wanted to know), who have a particular focus in the strange and wonderful creatures that live in the deep seas. NIWA scientists were part of the team that pulled up those mega-amphipods and I’m really pleased to say they have a great Facebook page dedicated entirely to their invertebrate collection. The NIWA Invertebrate Collection page has recently featured Phronima (one of favourites), Nematodes (perhaps the most under-studied group of animals on earth) an cold-water corals. Again, I encourage you to check out (an follow!) the page, but here are a couple of recent photos to entice you:

Finally, let’s leave the Crown Research Institutes behind and go to Massey University and “Soil Bugs: A guide to New Zealand’s soil invertebrates“. Soil bugs is run by Dr Maria Minor and contains information and photographs of some of the thousands of species that live in the soil, leaf litter and rotting logs that cover the floors of our forests. Soil invertebrates a hugely important animals, being as they help to release the nutrients locked up in dead wood, but I’ve gone on about that plenty of times. So let’s look a couple of my favourites GIANT Springtails and native land snails: 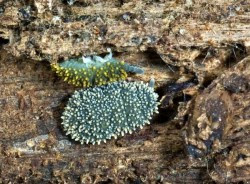 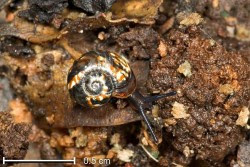 Left: Holacanthella spinosa Right: Flamulinna zebra. Note, these images are © Massey University, and premission sought be sought to use them elsewhere.