It’s the first week of semester two down here at Otago, which means I will helping with undergraduate labs for the first time this year. I suspect most students end up not liking me all that much, because I find my self teaching in the parts of the genetics program that undergrads like the least. Population genetics, as the name suggests, is the study of the way genes behave in populations, and in many ways its the base from which our understanding of evolution is built. So it’s important, but it’s also pretty mathsy.


It seems quite a few students have planned their high school and unversity careers in the hope that studying biology meant that could leave maths behind. So, when they are confronted with “p2 + 2pq + q2 = 1” and asked to do something with it, they are unhappy.

That particular formula is for something called the Hardy-Weinberg equilibrium and a significant proportion of students roll their eyes and slump their shoulders when you tell them they are going to need to use it for a problem. They think its arbitrary and irrelevant to anything the least bit important, and what’s more it looks a little like it’s already solved. So, I’m always looking for ways to convince people that Hardy-Weingberg isn’t just simple, but actually intuitive and important. So here’s my attempt to explain why knowing a little population genetics is helpful.

You may remember last year  a Danish sperm bank had started turning away would-be donors with red hair, since there is little demand for sperm that might contribute to the creation of a readhead. It turns out, if you know a little bit about population genetics you can see that policy will have little effect on the number of red heads the sperm bank helps to bring into the world.

Hair colour is partially controlled by a gene called MC1R. There are different versions of MC1R floating around in human populations, and one of them has a mutation that stops melanin (a dark pigment)  passing into hairs as they grow. Geneticists call different versions of a gene “alleles”, so we’ll call this flavour of MC1R the “red hair allele” and give it the symbol r.As I’m sure you know, you have two copies of most of your genes, one inherited from your mother and the other from your father. Red hair is a recessive trait, which means in order to have red hair both of your copies of MC1R need to be the r allele: if you have one or two copies of the “normal” MC1R allele (which we’ll call “R”) you have some pigment passing into your hair and it will be another colour. We call the total genetic make-up of a person their “genotype”, and their physical characteristics their “phenotype”, so here’s a table showing the genotypes and the phenotypes we’re talking about in this post:

I know there are a lot of technical terms there (Carl Zimmer will not be happy...), but we do need to be precise when we talk about genetics because, strange as it may seem, there isn’t a single definition of the word gene. Once you’ve got your head around the terms, it’s all pretty straight forward: you need two copies of the r allele to have red hair. Think what this means for the Danish sperm bank though. Turning away red headed sperm donors doesn’t turn away red headed sperm since there will still be “carriers” with only one copy of r (and, thus, non-red hair) donating sperm and half of those sperm will be “red headed sperm”.

Knowing this relationship, we can work backwards and find the frequency of r if we know the proportion of redheads in a population. In most of Northern Europe, about 4% (0.04) of the populaiton are redheads so  q2 = 0.04 and q = √0.04 = 0.2. As you can see, red hair genes can be a lot more common than redheads: 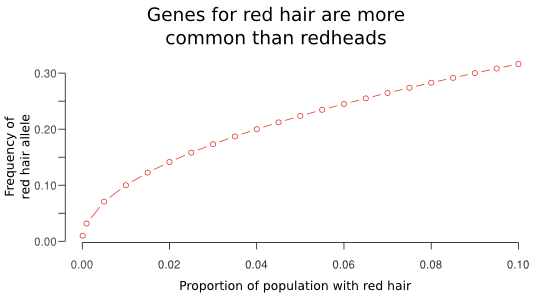 To understand how the sperm bank’s policy will we work, we need to know about those ‘carriers’ with the mixed genotypes (called “heterozygotes” by genetics geeks). It doesn’t matter which order your genes come in, so the probability of being a carrier in the population above will be the chance of getting an R then and r (p x q) plus the chance of getting and r followed by an R (q x p). You can simplify that to 2pq. You might recognize that term, because with it we’ve rediscovered the one in the first paragraph “p2 + 2pq + q2 = 1“. The Hardy-Weinberg equation is just away of moving from allele frequencies to genotype frequencies (or the other way around) and it’s based on some very simple observations about the way populations work. We saw that in a population with  4% redheads you get q = 0.2, so p=0.8 and 2pq = 2 x 0.2 x 0.8 = 0.32. Almost a third of the population are carriers, and that’s eight times the number of redheads! While the frequency of the red hair allele is low, only a small proportion of the red haired alleles in a population will actually in red haired people:

That’s why the sperm banks policy, while prefectly sensible if there really is no demand for sperm from redheads, will do little prevent the creation of red-headed babies.  In the typical case, where 4% of the population are redheads the probability that a donated sperm carries the r allele only moves from 20% to 17% when you exclude red haired donors

It’s easy to calculate how the policy would work in populations with more or less redheads: 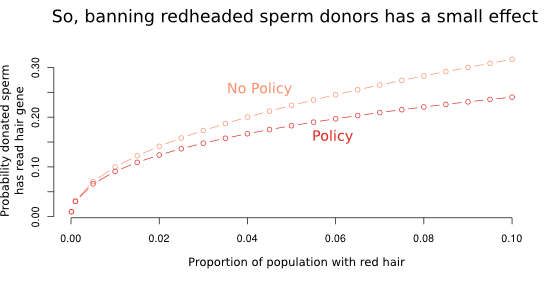 So, that annoying equation we make the undergrads learn actually tells us something about the world. Obviously, the example I’ve talked about here is a pretty silly one, but the basic ideas we’ve discovered above can help us understand some important ideas. Like why genes that cause debilitating diseases aren’t completely removed by natural selection, and why inbreeding is a bad idea.

Because disease causing genes stick around in populations, there is a pretty good chance that you carry a few alleles that would cause a debilitating disease in someone who had two copies of them. The same applies to anyone you might be hoping to have children with. Thankfully, its very unlikely that your prospective mate with have disease-causing alleles for the same genes that you do. That is, as long as you look beyond the family tree when you look for a mate. If you have a child with someone who is closely related to you, you will have each inherited some of your genes from the same source, which increases the chances you share disease alleles.


*In fact, they often reach a point called “mutation-selection balance” in which the frequency of the allele remains static because new mutations re-create the allele as quickly as selection removes it. JBS Haldane was the first person to notice this, and he used his theory to create a very accurate estimate of the human mutation rate well before we knew what genes were made of!