Here’s another of these tiny native snails I talked about last week. Aeschrodomus stipulatus: 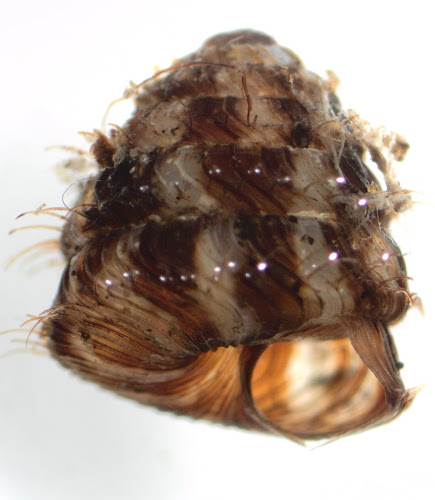 Not the best photo I’ll admit, but it records enough detail to see the two things that set Aeschrodomus apart from most of its relatives in New Zealand. It’s tall and hairy. I’m not sure if there is an accepted definition of “hair” when it comes to snail shells, but plenty of different land snails groups have developed processes that extend form the shell. In New Zealand we have the fine bristles of Suteria ide, the filaments of Aeschrodomus and the spoon-shaped processes of Kokopapa (literally “spoon-shell”): K. unispathulata Photo is from David Roscoe / DoC and is under Crown Copyright
I try very hard to avoid the sloppy thinking that presumes there is an adaptive explanation for every biological observaton, but it’s hard to see how these hair-like processes would evolve if they didn’t serve a purpose. The larger hairs are presumably made from the same calcium carbonate minerals as the rest of shell, and calcium is a precious resource for snails (so much so that empty shells collected from the field often show signs of having been partially eaten by living snails). In those species with finer projections, the hairs are an extension of the “periostracum”, a protein layer that covers snail shells.  If we presume that snail hairs come at a cost, in either protein or calcium, what reward are they hairy snails reaping from their investment?

Markus Pfenninger and his colleagues asked just that question by looking at snails from the Northern Hemisphere genus Trochulus (doi: 10.1186/1471-2148-5-59). This genus contains many species that sport very fine and soft hairs. Pfenninger et al.collected ecological data for each species, and used DNA sequences to estimate a the evolutionary relationships between those species. From these data, they were able to infer the common ancestor of modern Trochulus species was probably hairy, and three separate losses of hairyness can explain all the among-species variation in this trait. Moreover, it appears the loss of hairs in Trochulus is associated with a switch for wet to dry habitats. Given this finding, Pfenninger’s team hypothesised that, in Trochulus at least, hirsute snails might stick to host plants more effectively than their bald brethren. Indeed, in experiments it took more force to dislodge a hairy shell from a wet leaf than non-hairy one.

Pfenninger’s study makes a neat case for the maintenance of hairy shells in Trochulus, but I don’t think adherence to leaves can explain all the hairy snails we know about. In New Zealand, most snails with shell processes are limited to leaf litter, a habitat that would seem to make adhering to leaves a positive hindrance to getting around. I don’t know if we’ll ever have a simple answer as to why some of our snails sport these attachments, but Menno Schilthuizen‘s work might give us a couple of clues as to why these sorts of shell sculpture arise and stick around. In 2003, Schilthuizen proposed many shell features may arise because those individuals that have them are more likely to procure a mate (or perhaps a desirable mate) (doi: 10.1186/1471-2148-3-13). Although there is quite a lot of evidence for sexual selection in land snails, I don’t know of a study testing Schilthuizen’s hypothesis on shell sculpture. On the other hand, Schilthuizen’s group has found evidence that elebaroate shell sculpture can arise as a response to predation (doi: 10.1111/j.0014-3820.2006.tb00528.x). Opisthostoma land snails from Borneo have extradonary shells, with unwound shapes, ribs and spines:

Opisthostoma mirabile
In Borneo, Opisthostoma species live alongside a predatory slug that attacks these snails by boring a hole into their shells. The unique shape and ornamentation of Opisthostoma shells appears to have evolved to hinder slug attacks. Even more interestingly, geographically distinct populations of slug appear to attack snails in different ways. This local variation in predator behavior could well be a response to local variation in the shell ornamentation – a so called Red Queen process in which each population evolves rapidly while maintaining more or less the same relative fitness.

There are certainly plenty of snail-eating animals in New Zealand. Several species of Wainuia land snail appear to specialise in eating micro snails, which they scoop up and carry off using a “prehensile tail” (Efford, 1998 [pdf]). It’s entirely possible that the relatively small projections that some our snails sport are preforming the same job that those weirdly distorted Opisthostoma shells serve.