Christie Willcox wrote a nice article this week on how one small group of organisms called “vertebrates” first evolved to live on land. Since you are a vertebrate who lives on land, you should probably go and read Christie’s piece. I wouldn’t want you, however, to go around thinking those first fish to leave the ocean behind were pioneers making a uniquely difficult transition. By my figuring, onycophorans (velvet worms like peripatus), tardigrades, annelids, nematodes, nemerteans (ribbon worms) and quite a few arthropod lineages have also taken up a terrestrial lifestyle. Many of those lineages were already breathing air before Tiktaalik, Ichthyostega and your other long-lost relatives came along to join them on land. But if you want to talk about transitions from marine to terrestrial lifestyles then you really want to talk about snails. You can find snails living in  almost every habitat between the deep ocean and the desert, and snails have adapted to life on land many different times. In fact, a litre of leaf litter taken from a New Zealand forest can contain snails representing three separate transitions from water to land.

Almost all the land snails I’ve talked about here at The Atavism are descendants from just one invasion of the land. We call these species the stylommatophorans and you can tell them from other landlubber-snails because they have eyes on stalks (as modeled here by  Thalassohelix igniflua): 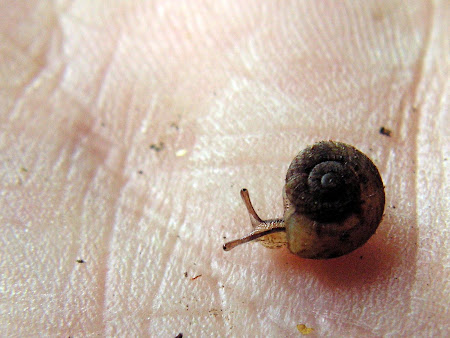 These snails are part of a larger group of air-breathing slugs and snails (including species living in fresh water,  estuaries and even the ocean) called pulmonates or “lung snails”. As both the common and the scientific names suggest, pulmonates breathe with lungs. Specifically, the mantle cavity, which contains gills in sea snails, is perfused with fine veins that allow oxygen to permeate the snails’s blood. In relatively thin-shelled species you can often see this “vasculated” tissue in living animals:

Blacklight photo of Cepaea nemoralis showing ‘vascularised’ lung. Photo is CC BY-SA via Wikipedian Every1Blowz
The pulmonates can also regulate the amount of air entering their lungs with the help of an organ called the pneumatostome or breathing pore –  an opening to the mantle cavity that the snail can open or close at will: 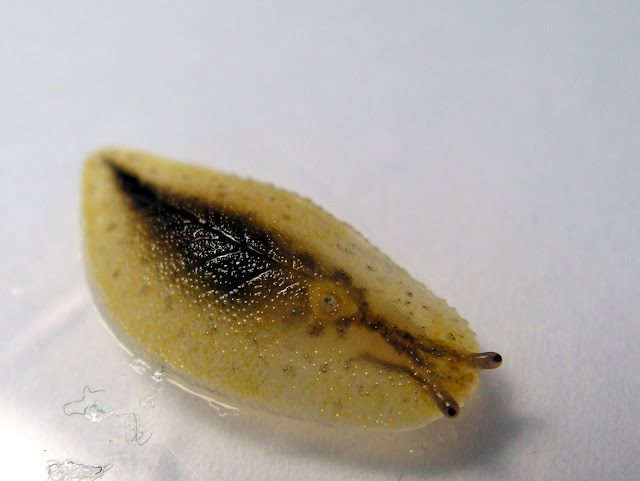 A leaf-veined slug from my garden – the small opening near the “centre line” of the slug is the pneumatostome. Interestingly, leaf-veined slugs don’t have lungs, the pneumatostome opens to a series of blind tubes not unlike an insect’s respiratory system
So that, along with a whole load of adaptations that prevent a fundamentally wet animal from drying out, is your basic land snail. But those little leaf-litter snails I’ve been talking about for the last couple of weeks provide a good reminder that other snail lineages have left the life aquatic. Here’s a species you find almost everywhere there is native forest in Otago, Cytora tuarua: Holotype of Cytora tuarua B. Marshall and Barker, 2007. Photo is from Te Papa Collectons onlne, and provided under a CC BY-NC-ND license
Cytora is from the superfamily Cyclophoroidea, a group of snaisl that have indepedantly adapted to life on (relatively) dry land. (The weirdly un-twisted Opisthostoma is in this post is another cyclophoroid).  Cyclophoroids share some stylommatophoran adaptations to life on land, they’ve lost their gills and replaced them with a heavily vesculalised mantle cavity. Slightly oddly, cyclophoroids also breathe with their kidneys. Or, at least, the nephridium, an organ which does the same job as a vertebrate kidney, includes “vascular spaces” that the snail can use to collect oxygen from the air. Cyclophoroids don’t have an organ equivalent to the breathing pore to control the flow of air into the mantle cavity. Instead the mantle cavity is open and air enters by diffusion, or in larger species, as the result of movements of the animals head.
For the most part, the respiratory and excretory systems in cyclophoroids are not as well adapted to life on land as those in their stylommatophoran cousins. For this reason, most cyclophoroids are only active in very humid conditions. In my limited experience, Cytora species are usually found deep in moist leaf litter and soil samples, and I’ve never seen one crawling about. Nevertheless, some species can survive in drier situations, and these are certainly terrestrial snails.
Local leaf litter samples reveal a third move from the water to land. I don’t have nice photo of Georissa purchasi, and I can’t find anything else on the web either, so you’re stuck with a crumby drawing from my notebook: I did warn you that it was a crumby drawing. In life G. purchasi have an orange-red sort of a hue, and you can often see patches of pigment from the animal through the shell.  Georissa species are from the family Hydrocenidae and are quite closely related to a group of predominantly freshwater snails called nerites. Just like the other lineages discussed, the Hydrocenidae have given up their gills and breathe through a vasculated mantle cavity. Very little is known about the biology of these snails. G. purchasi is sometimes said to be limited to very wet conditions, but I’ve collected (inactive) specimens form the back of fern fronds well above ground so it can’t be completely allergic to dry .
So, in a handful of leaf litter collected from a Dunedin park you might have cyclophoroids, hydrocenids and  stylommatophorans – descendants from three different moves from sea to land. If we look a little more broadly,  there are are many more examples of this transition.  I’ve written about the the helicinids before, then there are terrestrial littorines (perwinkle relatives) some of which have both gills and lungs. Plenty of other pulmonate lineages that have also taken up an entirely terrestrial lifestyle. Because some of these groups have adapted to life on land multiple times, there have probably been more than 10 invasions of the land by snails.
Most of the description of Cyclophoroids here is taken from: