At last, Dunedin has managed to arrange a proper summer day for a weekend.

The extra heat and sun saw plenty of bugs out and about, and I spotted plenty of familiar critters (native bees,  cicadas, drone flies and magpie moths) for this first time this year.  The real find of the weekend though, was something entirely new to me: 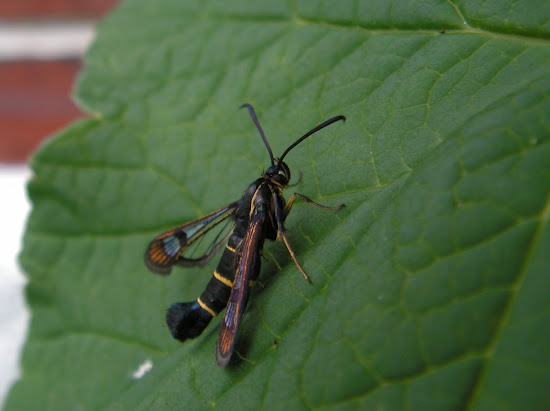 You might be a little surprised to learn that you are looking at a moth.

I’m helping design an undergraduate lab on systematics and taxonomy at the moment.  Since the new lab is about insects I’ve suddenly become very aware of the traits that distinguish various insect groups.  Moths, along with butterflies, make up the order Lepidoptera. You can see a few lepitoperan characters in the above photo: a mouth designed for siphoning nectar from flowers and a body covered in fine scales.

“Lepitoptera” actually mans “scaley wing”, and, indeed most butterflies and moths have scales on their wings. This species, though, has got rid of most of it’s wing scales (there are plenty of scales on the trialing edge though): 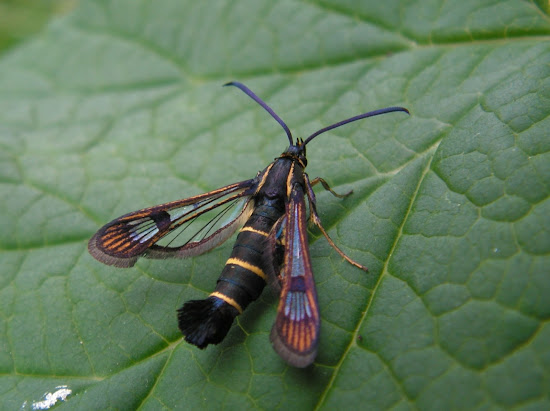 Synanthedon tipuliformis * is member of the “clear wing” moth family Sesiidae. Although I think this one is pretty neat, the family contains some striking species, the most interesting of which are wasp-mimics

*The species name means, I guess, “looks like a crane fly“… don’t see it myself