I got some good news this week – a paper I’m an author on was accepted for publication pending some minor revisions. That’s great because career advacement in academia rests largely on what we publish, and this is a good paper that I’ll be happy to add to my CV. It’s also quite happy about his particular paper being (almost) accepted because it’s about serpulids, segmented worms of the phylum Annelida (relatives of earthworms). A new phylum for me.

Biology is about diversity. I know I always go on about this, and end up affecting the overly-enthusiastic style of the guide in Douglas Adams’s Hitchiker’s Guide to the Universe:

Biological is diverse. You just won’t believe how vastly, hugely, mind- bogglingly diverse it is. I mean, you might think there are lot of creatures in your average David Attenborough documentary, but that’s just peanuts to the true diversity of biological systems, listen…

Well, I don’t know to put in words, so let’s try a picture. All that biological diversity got here because life evolves. When populations break up they are free to evolve apart from each other and develop entirely new functions or features and so become different. In this way, life is a tree, forming new branches as populations split. When we come to deal with the diversity of life, biologists try to reconstruct that tree, giving names to those tips and twigs which belong to a particular branch. In that  system of classification the phylum (plura phyla) is the one of the deepest divisions.

Creatures in separate phyla have usually been evolving apart from each other for 600 million years or more, and represent entirely different ways to deal with the trials of life. The annelid paper will mean I’ve published on 5 different phyla. That’s exciting for me – it’s nice to think I’ve added a little to our knowledge of decent sampling of the tree of life. But the truth is, biology is just so diverse that I’ve not even made a dent the tree of life. Here’s a picture of all the Eukaryotic phyla (that is, creatures with cells like ours, but not bacteria and archaea) with only those I’ve published at least one paper on labeled: 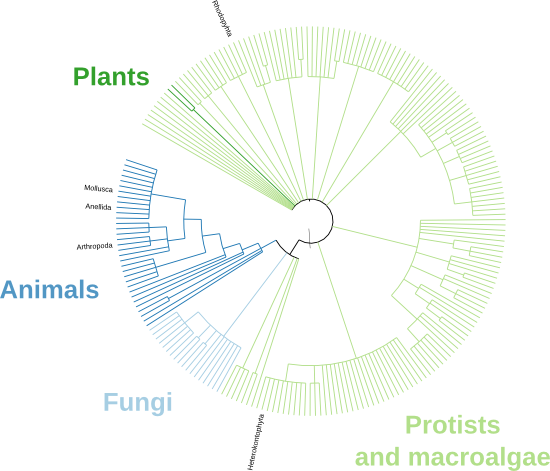 Tree was drawn and shaded with iTOL‘s nifty interfact to the NCBI taxonomy. There’s a couple of things to note here. Because this is the NCBI taxonomy it’s a curated tree rather than the result of any particular analysis. Although we aim to create biological groups “natural”, in the sense they are a single branch in the tree of life, the rank giving to a particular branch is somewhat arbitrary and will differ between different groups (so green plants, which traditionally had “divisions”  rather than phyla are certainly underrepresented here). Protists (single-celled eukaryotes) are certainly diverse, but Psi Wavefunction tells me protistologists have almost given up on rank-based taxonomy so this might not be a fair representation of them.
In any case, it’s certainly a spur to me to get back to work and fill in a few blanks on the figure!

0 Responses to “Sunday Spinelessness – 5 down…. quite a few to go”