Luis at Quantum Forest has been doing some great work with the schools data. I’m picking up on it with a few regressions. Raw performance data for the schools isn’t all that instructive as schools have very different raw materials with which to work. But it would be nice to know how well a school does given the decile and ethnic mix of students coming into the classroom. So let’s check that.

I’m using Luis’s data here, modified slightly to work in Stata: I replaced the NA cells with . so that Stata would read things as numeric variables rather than strings. My do file and dta file are up at Dropbox.

Like Luis, I started by generating a variable giving the proportion of students either meeting or exceeding the standard in each of reading, writing, and maths. I then ran a few simple linear regressions with analytic weights equal to the total school roll: the dependent variable is an average and the schools average over different numbers of students.

Results are in Table 1, below. But first, a caveats. As best I understand things, these grades are not moderated. So any effects here could be saying either that some schools do a better job in teaching, or that some schools engage in grade inflation.

Class size matters: schools with more students per teacher have higher pass rates. I suspect reverse causation here: for a fixed budget, those schools that are able to run larger classes are likely those that have fewer discipline problems and so are able to put those resources to other uses.

Ethnicity matters. A standard deviation increase in the proportion of Maori students reduces aggregate pass rates by 1.3 percentage points in reading and 2.2 percentage points in math. Similar trends exist for Pacific Island student ratios. I’d be pretty cautious in interpreting this one: if you run things decile-by-decile, the effects mostly disappear. The biggest negative effect seems to hold in high decile schools, but by the time you get to Decile 10 schools, the median school has only 5.9% Maori students. Results then may be a bit sensitive to a few outliers on the right hand side. Like Luis, I’ll refrain from doing much more until the official results come out.

I generated residuals from each of the three specifications above. The residual tells us whether a school had a higher or lower pass rate than we would have expected given its characteristics. This either tells us how good (or bad) the school is at teaching, or how good (or bad) it is at grade inflation. Without external moderation, it’s hard to tell. The residuals from the three specifications correlate strongly with each other: schools that are good (or grade inflate) tend to do so across the board. The lowest pairwise correlation was 0.57; the highest was 0.63. I averaged the residuals to get a composite score. A high residual means that the school’s actual pass rate was higher than what we would have expected given its characteristics.

I’m not confident enough in the model to put up my own league table of residuals. But I will put this up. This is a scatterplot of the residuals showing just how much school performance varies after we have corrected for decile, ethnicity, and everything else in the above model. That can point to its being a bad model, the underlying data being bad, strong differences in teaching quality across schools, or a combination of all three. 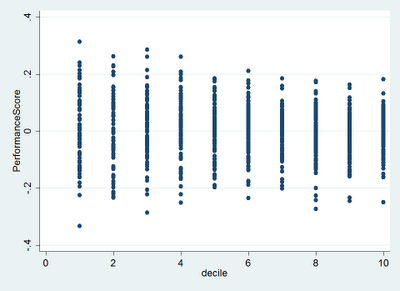