At VoxEu.org Jeremy Bulow and Paul Klemperer have a new article on A new way to understand consumer surplus, price controls, and rent seeking.

Bulow and Klemperer show that consumer surplus in any market equals the area between the demand curve and the industry marginal-revenue curve. They argue that this observation has interesting implications for understanding rent seeking and price controls. For example, a price control reduces consumer surplus in an otherwise-competitive market with convex demand whenever supply is more elastic than demand.

Consumer surplus as conventionally defined (that is, the sum of consumers’ valuations less the prices they pay) can be computed as the difference between industry demand and industry marginal revenue of the units supplied. In the figure below consumer surplus equals areas I plus II but also equals areas II plus IV. 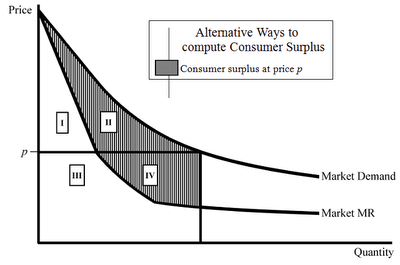 This is because both areas I plus III and III plus IV give you total revenue. And thus area I equals area IV.

Bulow and Klemperer use this idea in two examples.

Textbook analyses of rationing typically focus on the cost of reduced supply. But the available supply will not necessarily be allocated to those with the highest values, and rent-seeking behaviour, such as queuing, lobbying, and search costs, also dissipates surplus. When do these costs outweigh the benefits of lower prices, so that price controls reduce consumer surplus?

Measuring consumer surplus using marginal revenues provides crisp answers. In Bulow and Klemperer (2012) we show that if output is allocated randomly among those prepared to pay more than the controlled price and supply is more elastic than demand, then a price control in an otherwise competitive market always hurts consumers if the industry marginal-revenue curve is no more than twice as steep as the demand curve. This condition holds if demand is convex, e.g., linear, log-linear, etc.

Even with completely inelastic supply, total consumer surplus falls whenever the marginal-revenue curve is less steep than demand. This condition holds if demand is log convex; constant elasticity is one example.

So, as a group, consumers (as well as producers) would often gain from higher prices that avoid rationing. Rationing typically hurts consumers far more by allocating goods to the wrong people, than by the reduction in supply described in the standard textbook calculations which assume efficient rationing.

Our approach is particularly powerful for modelling phenomena such as rent seeking.

The reason is that consumers who have to make expenditures on search, queuing, lobbying, or other rent seeking are, in effect, paying different prices for the goods they receive. And measuring consumer surplus as the area between demand and price is hard if every consumer is facing a different (effective) price, and these (effective) prices also depend on the details of the context. But total consumer surplus is still easily measured as the sum of buyers’ values minus their marginal revenues, since buyers’ marginal revenues do not change even when their (effective) prices change.

So, for example, it is easy to show that, for an extremely wide class of models, the previous results about rationing are unaffected by rent-seeking behaviour. Though rent seeking leads to allocation of goods that is more efficient than random, the costs it dissipates mean a price control is guaranteed to hurt consumers under exactly the same conditions that applied with random allocation.

The same methods extend the results to models that include resale, and to partially controlled markets. Our analysis does ignore distributional issues – even when price controls reduce aggregate consumer surplus, they redistribute it among consumers. But in sum, and especially if supply is fairly elastic, it is unlikely we can be confident that consumer surplus is enhanced by any price control.

Similar techniques can also be applied to producer surplus, and rent seeking by producers, for example, the social costs of lobbying for import quotas, etc.