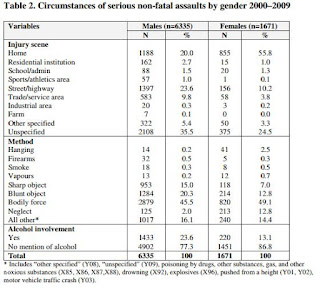 The University of Otago’s John Langley and and Pauline Gulliver find that alcohol was “involved” in 23.6% of non-fatal assaults by males; 13.1% of non-fatal assaults by females. Table 1 shows assaults to be relatively concentrated among Maori (31.7% of male assaults, 47.8% of female assaults; Maori represent about 15% of the population by the 2001 Census) and among the poorest cohorts – the authors note decile 9 males have assault rates 26 times the average in decile 1. There is no econometric analysis allowing for the disentanglement of ethnicity and income effects; Maori are more heavily represented among the poorest cohorts. Note further that “involvement” here also refers to the victim, not necessarily the perpetrator, unless the victim and the perpetrator co-identify (two people in a fight, for example).

We also have no clue about base rate alcohol consumption. If assault is concentrated among the poorest, and among Maori, if we were to take a random snapshot of that cohort during the day and ask “Have you had alcohol recently?”, we don’t know what the answer would be. What is the rate of alcohol involvement in other non-violent activities among the at-risk cohort: alcohol-involved rugby-watching, alcohol-involved friendly gatherings, and so on. I’d expect it would be higher than the population average, but that’s just a hunch. If a high proportion of activities undertaken in this population group could have the “alcohol involvement” tag added, it’s hard to draw causal inferences about the effects of alcohol on assaults from simply observing that between a fifth and a quarter of incidents involve alcohol.

In noting the study’s limitations, the authors write:

We have no way of knowing whether alcohol involvement played a casual role in the assaultive injuries described in this paper. It could well be, for example, that many of the males just happened to be drinking at the time. On the other hand there is evidence from elsewhere that being intoxicated increases one’s risk of becoming a victim of assault.9 Alcohol misuse is also a distal risk factor for assault, where a pattern of heavy episodic drinking has been associated with a threefold increase in victimisation involving drinking.10

And today’s headline: “Booze is fuelling rise in serious assaults” . From the newspaper:

A rise in serious assaults among young Maori and Pasifika males to ”disturbingly high levels” has researchers calling for the Government to take action over alcohol.

Emeritus Professor John Langley, of the University of Otago’s Injury Prevention Research Unit, says assaults are rising steadily and blames the Government for their failure to curb alcohol consumption.
A study published today in the New Zealand Medical Journal, co-authored by Langley and Dr Pauline Gulliver, examined the 8006 serious non-fatal assaults between 2000-2009 and is the first comprehensive statistical analysis of this category of violence in over two decades.

Excessive alcohol consumption was a common factor in the assault incidents, which frequently featured young to middle-age males beating up similarly aged males, Langley said.
”One of the key messages from the paper is 80 per cent of the problem is males. Most of those males are being assaulted by other males, and guess what the fuel is: it’s alcohol.”
He said the Government needed to make alcohol harder to buy, and said their lack of action to date had been ”inexcusable”.

The article continues in that vein, quoting the study’s authors drawing an awfully long policy bow from their paper’s findings.

Things that definitely are NOT in the NZMJ paper:

The prevalence of potentially hazardous drinking dropped from 1996 to 2002 among Maori before rising again to roughly its 1996 level by 2006. The NZMJ paper has serious assaults by bodily force (ie a fight without weapons) sharply increasing from 2003 onwards, so that’s at least not inconsistent with the alcohol hypothesis. But look at the rates: prevalence of hazardous drinking went from 32.9% to 37.5% among Maori over the period (with much much smaller increases for other groups). A fourteen percent increase. Serious assaults using bodily force more than doubled (other categories were flat).

Further, where the rate of potentially hazardous drinking is pretty high for some cohorts, it would be more surprising to find an absence of alcohol use. What’s the rate of alcohol involvement in watching rugby within that cohort? How can we say anything about causality or draw strong policy conclusions?

I guess the NZMJ piece is a convenient hook, but it sure doesn’t look like it provides much scientific basis for the policy conclusions they’re hanging on it. And I fully expect it’ll be cited often as evidence favouring cracking down on alcohol.

SciBlogs note: My disclosures around alcohol are here.

0 Responses to “The paper and the rhetoric”