As I have noted before Andrew G Haldane has asked the question, What have the economists ever done for us? In this article Haldane makes two claims,

“Two developments – one academic, one policy-related – appear to have been responsible for this surprising memory loss. The first was the emergence of micro-founded dynamic stochastic general equilibrium (DGSE) models in economics. Because these models were built on real-business-cycle foundations, financial factors (asset prices, money and credit) played distinctly second fiddle, if they played a role at all.

“The second was an accompanying neglect for aggregate money and credit conditions in the construction of public policy frameworks. Inflation targeting assumed primacy as a monetary policy framework, with little role for commercial banks’ balance sheets as either an end or an intermediate objective. And regulation of financial firms was in many cases taken out of the hands of central banks and delegated to separate supervisory agencies with an institution-specific, non-monetary focus.”

There is obviously some truth in this, but are these really major factors behind the financial crisis? Imagine looking at the following chart in 2005 or 2006. The increase in leverage that began in 2000 is both dramatic and unprecedented. (Much the same is true for the US.) Was this ignored because central bankers said this variable is not in their DSGE models? In my experience those involved in monetary policy look at a vast amount of information, particularly on the financial side, even though none of it appears in standard DSGE models, and even though their ultimate target might be inflation. For some reason monetary policymakers discounted the risks this explosion in leverage posed, or felt for some reason unable to warn others about it, but I very much doubt these reasons had anything to do with DSGE models. 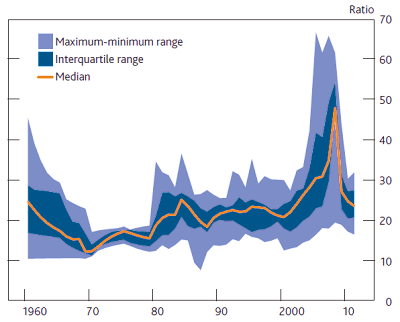 I say this because to place too much weight on the culpability of DSGE models and inflation targeting can lead to overreaction, and may sideline more fundamental issues.[ … ] Let me take overreaction first. It is one thing to claim, as I have, that the microfoundations approach embodied in DSGE models encouraged macroeconomists to avoid modelling difficult (from that perspective) issues like the role of financial institutions in credit provision. It is quite another to suggest, as some do, that DSGE models are incapable of doing this. This second claim was false before the crisis (e.g. Bernanke, Gertler & Gilchrist, 1999), and has clearly been shown to be false by the post crisis explosion of DSGE work on financial frictions. Forming a rough consensus around a reasonably simple and tractable model of the crisis that can also assess the subsequent policy response will not happen overnight (it never does), and I suspect it will involve tricks which microfoundation purists will complain about, but I’m pretty certain it will happen.

Andy Haldane talks about the need to model the interconnections (networks) of actors and institutions in order to understand how sudden crises can emerge. This must be right, and recent work that begins to do this looks very interesting. However what seems to me critical in avoiding future crises is to understand why leverage increased (and was allowed to increase) in the first place, rather than the specifics of how it unravelled. As I suggested here, we may find more revealing answers by thinking about the political economy of how banks influenced regulations and regulators, rather than by thinking about the dynamics of networks. We should also look at the incentives within banks, and why short term behaviour in the financial sector may be increasing, as Haldane himself has suggested. Investigating networks is clearly interesting, important and should be pursued, but other avenues involving perhaps more conventional economics and political economy may turn out to be at least as informative in understanding how the crisis was allowed to develop.