A big deal was made during the release of the Household Labour Force Survey (HLFS) of the decline in construction employment.  According to the HLFS, employees in the construction industry (including the self-employed) fell 4.0% from a year earlier in the September quarter – even as New Zealand’s second biggest city was supposed to be being rebuilt!

What was ignored was that this isn’t the only figure that discusses employment by industry.  A couple of days earlier the Quarterly Employment Survey (QES) was released.  This survey suggested that the number of staff hired by construction firms (excluding the self-employed) rose 5.7% while the hours being paid for in the industry climbed 9.2%! 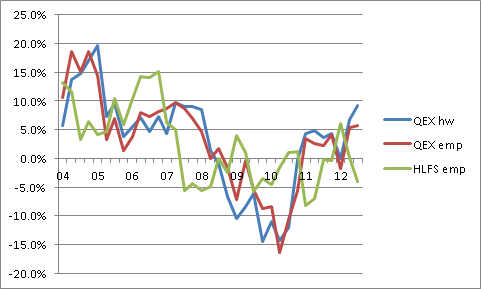 So what do we believe?  That is tough, lets go through some ideas.

The key point is, the HLFS told us that the labour market is very weak.  But it is not clear that construction is weak – in fact the acceleration in economically significant firms hiring and utilising workers suggests the opposite.