Chris Auld was prescient. If we require corrective policy to internalise pecuniary costs running through the public health system, then we have to do it across the board. And what if it turns out that healthy people wind up costing more because they have a longer retirement in which they consume lots of subsidized health services? He wrote:

This argument does not sit well with me.

A new article in PLOS Medicine finds that the lifetime health costs of the healthy are indeed highest:Non-smokers of moderate BMI imposed the highest lifetime costs. [HT: @Dick_Puddlecote, who points to the Telegraph’s report on the study.] Update: I’d missed the date on the PLOS online study; it’s from a few years ago. So Auld’s prescience may have been overstated. Thanks to Chris Snowdon for the correction.

From the article’s conclusion:

In this study we have shown that, although obese people induce high medical costs during their lives, their lifetime health-care costs are lower than those of healthy-living people but higher than those of smokers. Obesity increases the risk of diseases such as diabetes and coronary heart disease, thereby increasing health-care utilization but decreasing life expectancy. Successful prevention of obesity, in turn, increases life expectancy. Unfortunately, these life-years gained are not lived in full health and come at a price: people suffer from other diseases, which increases health-care costs. Obesity prevention, just like smoking prevention, will not stem the tide of increasing health-care expenditures. The underlying mechanism is that there is a substitution of inexpensive, lethal diseases toward less lethal, and therefore more costly, diseases [9]. As smoking is in particular related to lethal (and relatively inexpensive) diseases, the ratio of cost savings from a reduced incidence of risk factor–related diseases to the medical costs in life-years gained is more favorable for obesity prevention than for smoking prevention.

Here’s the graph of the expected costs and benefits of smoking and obesity prevention, imagining a costless intervention that would switch the obese or smokers into normal-weight non-smokers. For the first few decades after the assumed-costless intervention, all’s great. And then… 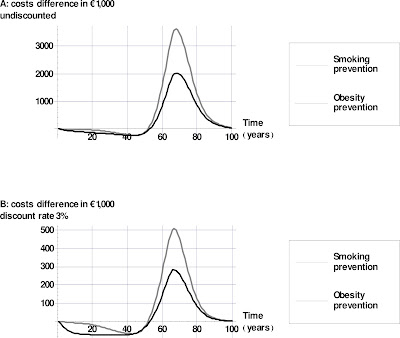 If it were free to turn smokers into non-smokers, and if we ignore tobacco excise revenues entirely, they say the costless intervention only passes a fiscal cost-benefit analysis for discount rates higher than 5.7%. If we remember that tobacco excise revenues are heavily front-loaded, being paid often decades before the health costs obtain, then you’re not going to find a discount rate where the costless intervention saves the government money.

They warn that they’ve only focused on health care costs and have left aside productivity costs. But the bulk of productivity costs are borne by the drinker, smoker, or eater himself: they’re reflected in lower wages.

Smokers remain the benefactors of the rest of us – voluntarily paying ridiculous levels of tax and then dying before taking much out of the superannuation system.

It’s a mistake to model governments as unitary agents. The zealot parts of government want to ban tobacco; the sane parts worry about revenue consequences. I wonder, as does Lionel Shriver, whether worries about lost excise motivate government antipathy towards electronic cigarettes. The zealot side of government doesn’t like them because they let smokers keep having fun without moral consequence; the fiscal side doesn’t like the lost revenue: bootleggers and baptists in different government departments.

Yet one of the features of our society is the steady accumulation of influence – and increasingly of power too – of what might be termed the Government-Health-Security Complex*.
Sometimes slippery slopes really do exist. Some folk warned that the public health industry – that is, the Government-Health-Security Complex – would never be satisfied with its battles against tobacco and alcohol and that it would, in time, launch fresh offensives against fast food, soft drinks, and all things salty an sweet.Don’t be silly, we were told. That’s different. Well, who looks stupid now?
Like so much else this is also, in the end, a question of power and class. The NHS – treated as some kind of secular religion – is to be used as a means of shaming the population (especially the bestial lower orders) into behaving in a more comely, acceptable fashion. The class prejudice inherent in all this is rarely far from the surface. The common people are revolting. Their pleasures must be taxed or, wherever possible, suppressed entirely (see extending the ban on smoking in working-class clubs for example).
And, always, the message is simple: the people – poor, lardy, wheezing, sods – are too stupid to make their own choices and it is government’s role to save them from themselves.

Next step then is plain packaging for breakfast cereals….