If my lifestyle and leisure choices lead me to remit less to the government in taxes than I would have under alternative scenarios, have I imposed an externality on the State?

Eric, care to weigh in on a debate I’m having about this elsewhere? Specifically, does loss of tax revenue as a result of lower productivity (e.g. due to smoking, eating too much) count as an externality? I’ve argued that the government would have to be spending efficiently, which is unlikely, for the loss of revenue to count as an externality and so it probably doesn’t (count). Not sure if that’s right, but the notion (i.e. loss-of-revenue-due-to-lower-productivity-as-externality) seems odd to me.

Let’s start with the big picture and work down to details.

Consider two people, alike in relevant ways at age 10 and equal in earnings potential, but with different utility functions. So they make different choices.

Mr. A decides that the rat race isn’t for him and decides instead to take a part-time job at 20 hours per week instead of 40. Were he to have worked a full time job, his earnings would have doubled and, because of progressive taxation, his tax payments would have more than doubled. But he’s not on welfare; he just can transform relatively little income into a fair bit of happiness because he really likes leisure.

Mr. B does not enjoy sitting idle; he consumes his leisure by smoking while working a full-time job. Associated health issues reduce his productivity and, as consequence, he earns a quarter less than he otherwise would; his tax payments are then perhaps a third lower than they otherwise could have been. Other sources have a lower wage penalty for smoking; we’ll stick with a big one for present purposes.

If Mr. B’s lower tax payments because of his choice to smoke are of policy consequence, then so too are Mr. A’s lower tax payments because of his choices. Indeed, we could say that Mr. A is far worse than Mr. B: while Mr. B pays, in New Zealand, about three times as much in tobacco excise as he’ll cost the public health system and is so kind as to die before costing the superannuation system very much, Mr A pays zero tax on his leisure and will earn two-thirds of the national average wage in his retirement despite having contributed relatively little to the superannuation system.

If we need to use policy to nudge Mr. B into smoking less, because of reduced tax earnings, then we also need to nudge Mr. A into working harder. And when nudges don’t work in tobacco and start becoming shoves, we need to start shoving Mr. A as well.

Mancur Olson argued that Stalinist Russia had the world’s most effective extractive tax regime. Workers were effectively compelled to work by near complete inframarginal taxation combined with very low taxation at the margin. If Stalin had had the ability to solve the Socialist Calculation Problem, he could have done slightly better, leaving each worker with an individualised menu of two choices: starvation, or a personalised bundle of very hard work and some goods leaving the worker epsilon better off than under starvation. I suppose that we could consider any deviation from that level of work as a harm imposed on the state. But it’s only Stalin who’d really want to push there.

The Okun Gap is the difference between potential and realised GDP due to excess unemployment. I’ll call the Stalin Gap the difference between an individual’s potential maximal tax payments and his actual tax payments based on his choice to consume leisure over labour – partially because he would choose some leisure even in the absence of taxes, partially because too high of income tax rates yields substitution to leisure.

Most of us could earn more, and consequently submit higher tax payments, by choosing more labour and less leisure. But we’d be less happy.

So that’s the big picture: the world in which the smoker’s lower income tax payments (ignoring his much much higher excise tax payments) are sufficient basis for taking away his leisure is one where we want to penalize people for taking holidays or failing to work as many hours as they otherwise could: closing the Stalin Gap. Unless we say that leisure via time off relaxing is, by assumption, good, while leisure via smoking is bad – but that remains question-begging.

Smaller picture: is this even an externality?

Short answer: likely, but likely very small, and that small portion mostly because of how the tax system treats poor people.

All right. An individual chooses between smoking, leisure and labour. In a world with private health care and no taxation, the individual optimally balances health harms from smoking against enjoyment of smoking – he earns less because he smokes, but that’s just part of the full cost of tobacco that he enters into his optimisation. All you behavioural guys who want to complain about whether he can be rational or informed on this can shut up for the moment – we’re trying to figure out whether he’s imposing an externality on the government once we move to a tax regime, so the behavioural stuff is entirely beside the point.

Some optimal level of smoking will be found above. What happens when we add taxation and government? The smoker will bear fewer of the wage costs of smoking because the government takes a portion of his earnings and so he should optimally smoke more. But again, the same is true of the individual’s choice to consume other forms of leisure in the presence of income taxation. Recall that in economics, we don’t care about externalities because of pecuniary effects like “the government gets less in tax”. We care about them rather because they distort choices: people move from taxed labour to untaxed leisure in the presence of income taxation. The incremental increase in smoking when the returns to labour drop under a taxation regime can be viewed as a distortion. But, again, think of anything that helps increase the marginal utility of leisure. In a world with taxes and government, people choose more days off playing cheap but excellent video games relative to the zero-tax world. What then is the productivity cost of video games? Or of any other kind of leisure? It’s hard for me to see any productivity externality of smoking that is different in kind from any other labour-leisure distortion generated by taxation. And it would take some number crunching to show that the technological portion of any effect* here isn’t already over-internalised by current levels of tobacco excise.

Gordon Tullock reminded us in 1998 that government produces externalities as well as solving some externality problems. The vast bulk of reduced income taxation accruing to government due to smoking could only be remedied by imposing harms on smokers that are larger than the potential gains to government. Now, if you want to assume that smokers are irrational and hurting themselves by their choice to smoke, you can do that, but you don’t really need the effects on income taxation to make the case.

Recall that smoking is concentrated among poorer cohorts and that marginal tax rates, though not average tax rates, are very high for the poor. If the deadweight costs of high marginal tax rates are making poor people smoke more than they otherwise would because the personal income losses are low, they’re probably also screwing up a whole lot of other choices that are of greater consequence as well. If you’re going to worry about it, start by trying to fix the tax schedule and abatement rates for the various income-contingent benefits so that the effective marginal tax rates facing poor families are not insanely high.

The Ministry for Social Development noted that 35% of beneficiaries (people receiving benefits other than just Working for Families, NZ’s EITC) in paid work in 2008 enjoyed effective marginal tax rates higher than 75%, with some non-beneficiary low income families enduring abatement of the minimum family tax credit facing EMTRs over 100%. MSD concluded dryly, “Work incentives are very low for such families”. 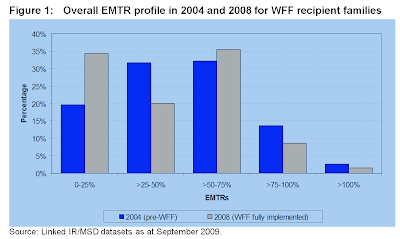 Effective marginal tax rates in excess of 75% are very likely to induce all sorts of very real distortions in behaviour; I expect the decision to smoke incrementally more because of reduced returns to wages is pretty trivial in this mess.

* Again, we don’t care about externalities that are pecuniary. Imagine that the smoker smokes exactly as much under a tax regime as under a no-tax regime. The government earns less than it would were the smoker a non-smoker, but this is purely pecuniary: the gain to the government by forcing him to quit would be overmatched by the losses experienced by the smoker. The only portion that can matter for welfare is the excess smoking induced by the lower return to labour under the tax regime. And that’s unlikely to be large relative to the amount of smoking that’s invariant to income tax rates.