I like the Reserve Bank’s series of ‘Analytical Notes‘ (you can subscribe to the Bank’s e-mail update service here if you’d like to know when new ones come out). They’re good, practical, background papers which don’t have to be scrubbed up to peer-review publication status, don’t commit the Bank’s policy arm to anything (‘views of the author, not the Bank’), and generally have something interesting to say about topical issues of the day.
Two more came out this week, Chris McDonald’s ‘Migration and the housing market‘ and Elizabeth Watson’s ‘A closer look at some of the supply and demand factors influencing residential property markets‘.
From the migration paper, here’s the overall relationship between net migration and house prices. 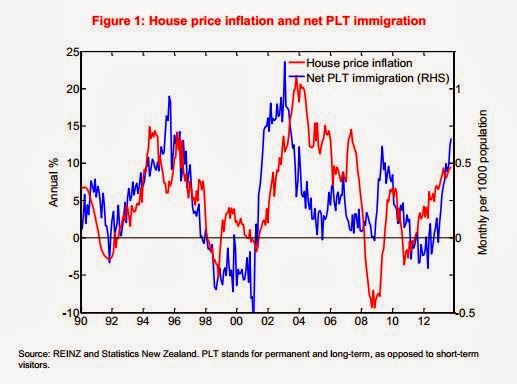 And if you’re more of a numbers person than a graphs person, here are some numerical estimates of the impact of net migration both on house prices and (on the supply side) new housebuilding consents.

More info is better than less, and I’m glad this research is out there, but I also hope it isn’t abused by the troglodyte protectionists in several of our political parties, who are already liable to blame high house prices on people arriving at the auction with suitcases full of Korean won. As the paper notes, there’s more going on here than the suitcase story: generally good economic conditions in New Zealand (as right now, for example) simultaneously drive up local consumer confidence, reduce emigration, and encourage immigration, all of which are likely to feed through to house prices.
The supply and demand paper is also full of interesting stuff. Before reading this paper, I’d have said that house prices relative to some set of fundamentals were at an all-time high, but perhaps the perspective from my home office has been distorted by the beyond-white-hot North Shore property market outside my window. Here’s one chart from the paper, which shows that prices appear to have been even more out of whack in 2007. That’s not to say we shouldn’t worry about some aspects of where we are now, but we’ve seen worse. 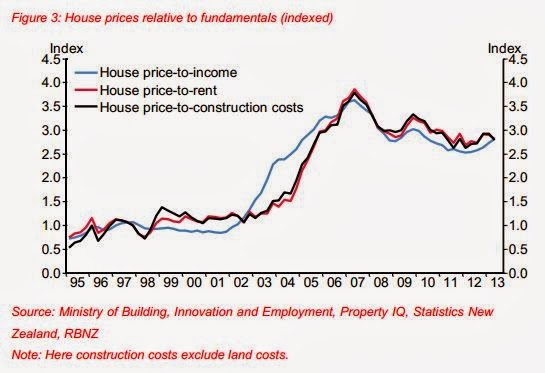 Another thing that emerges, to me, is the role of local authorities in impeding housebuilding. In a previous post I’d concluded that “if you want to find the real culprit behind Auckland’s housing shortage, look no further than your friendly local council staff”. This paper shows that residential building consents (including apartments) dropped sharply in Auckland from 2002-04 to 2008-11: some of this reflected cyclical conditions, and slower population growth in Auckland than previously (from the paper, 1.2% a year 2006-13 compared to 2.4% a year 2001-06), but the consents drop was bigger than the population slowdown. You’d wonder (my take, not the paper’s, just to be clear) if there wasn’t an anti-development ethos gaining force in Auckland’s planning offices.
Beyond higher prices than necessary because of the supply constraints, another outcome (as the chart below shows) was that Auckland people were getting more cramped in their living arrangements, just when the rest of the country was getting more room to live in. 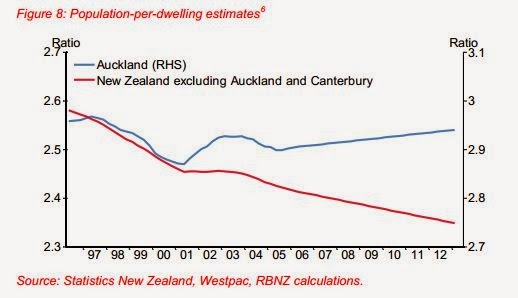 I’ve got one small question about one of the conclusions of the paper. It quotes some earlier research from Arthur Grimes and Andrew Aitken at Motu that “relative to population growth, districts in Auckland had the lowest supply responsiveness in the country during that time [1991-2004]. Grimes & Aitken (2006) estimate that Manakau, North Shore, Auckland City and Waitakere are the areas that have the least responsive housing supply in the country and that, within Auckland, areas with lower supply responsiveness tend to have higher house price inflation”, and then it graphs these four least-responsive regions (in the top graph) against four other regions in Auckland (bottom graph), as shown below. 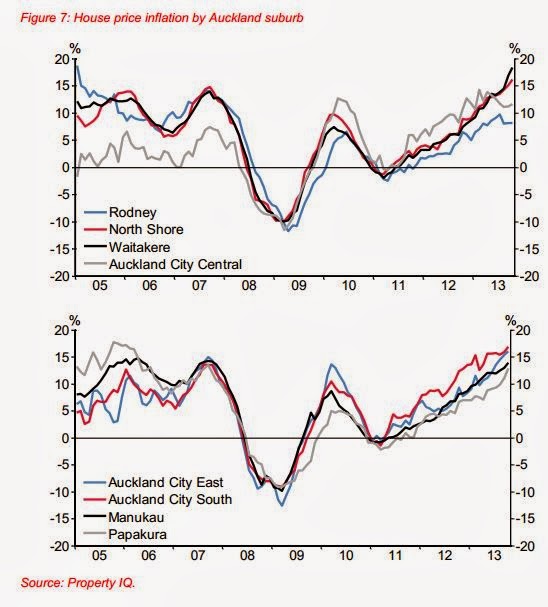 It might be down to my advancing decrepitude, but if there was a pattern there before, I can’t see it now.
In any event, have a look at these Notes for yourself – you’re bound to find something interesting and informative. And I’d also like to commend them, and the Bank, for adopting the very useful practice of including, upfront, a ‘Non technical summary’ for the intelligent lay reader. It seems to be spreading as good practice across a variety of media, and not before time. You’ve probably been as maddened as I’ve been by those useless ‘summaries’ in some of the academic journals (of the “In Section 5 we present our results and in Section 6 we present some conclusions” variety – what results? what conclusions?). The journals are getting better – I’ve just gone through all the articles in the latest American Economic Review, and every single one had a meaningful summary – but the non-technical summary goes one step better again.